As most people were shaking off their New Year’s hangovers, or thinking about taking down the Christmas tree, the competitive curlers across the country were busy playing games, trying to qualify for their various provincial and territorial finals. For many of the successful teams, the last hurdles in the quest for a place in the Scotties Tournament of Hearts or the Tim Hortons Brier begins this week. You can find a complete television schedule for the various provincial championships by clicking here. Nunavut Earlier this month, Nunavut determined its territorial representatives, both from the Iqaluit Curling Club. Going to the Scotties pre-qualifying event are Geneva Chislett and her team of Denise Hutchings, Robyn Mackey and Jenine Bodner. Wade Kingdon and his team of Dennis Masson, Aaron Fraser and Bruce Morgan will compete in the pre-qualifying round at the Tim Hortons Brier. Yukon The Yukon territorial championship wrapped up on the weekend with returning champion Bob Smallwood and his team of Jon Solberg, Clint Abel, Scott Odian and fifth David Rach earning their spot in the prequalifying round at the Tim Hortons Brier. Smallwood also represented Yukon at the pre-qualifying round last year but failed to advance. 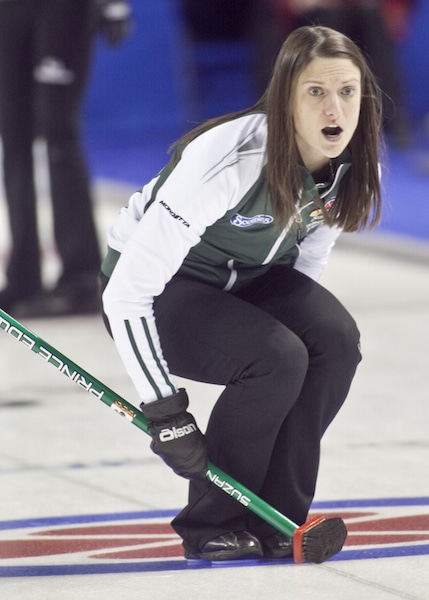 On the women’s side, Nicole Baldwin, Stephanie Jackson-Baier, Rhonda Horte, Ladene Shaw and alternate Sandra Mikkelsen won a best-of-three playdown over Jenna Duncan on Saturday to take the women’s Yukon title. The Baldwin team, coached by eight-time B.C. champion and 2002 Olympic bronze medallist Georgina Wheatcroft, will also compete in the pre-qualifying event at the Scotties. Prince Edward Island In Montague, P.E.I., on Monday, Suzanne Birt, with her Charlottetown team of Robyn Green, Meaghan Hughes and Marie Christianson, defeated Kim Dolan in a triple knockout playoff to earn a return trip to the national championship, her ninth appearance at the Scotties. Quebec While most provinces are running their Scotties playdowns separate from their men’s provincial competition, Quebec has the two genders combined at the Aréna Salaberry in Valleyfield, Que. Fourteen men’s teams and five women’s teams will be competing for the right to represent the province at their respective national championships. On the men’s side, former Brier champion Jean-Michel Mènard is the favourite, looking to win the province for the ninth time, including the last three consecutive years. Mènard is currently ranked 16th in Canada (based on Canadian Team Ranking System points), and his closest competition in his home province is Guy Hemmings, ranked 49th. Hemmings who won the Quebec title four times between 1998 and 2003 will be looking for his first title in more than a decade. 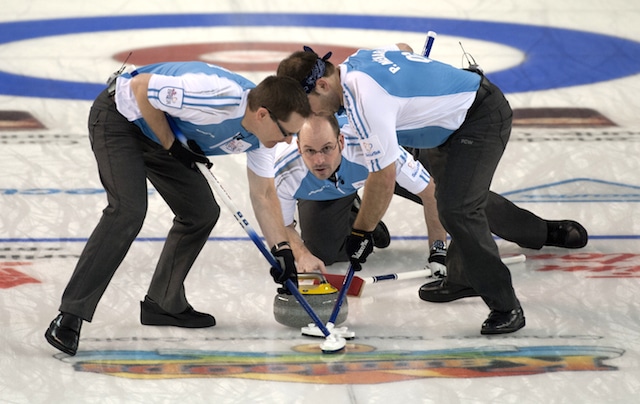 The five-team women’s event features defending champion Lauren Mann, who took Quebec to a 3-8 record at last year’s Scotties, and eight-time champion Marie-France Larouche, who returns to the provincial final for the first time since 2013. Larouche (49th place) has a few more CTRS points than Mann (56th) this year, but the rest of the field falls way behind, with none of the other three teams making the top 100. It will likely be a Mann vs Larouche final, and anything else would involve a major upset or two. Nova Scotia The Bluenosers are the only other province running simultaneous men’s and women’s championships. Both events will be held at the Mayflower Curling Club in Halifax and feature past national champions in the field. Mark Dacey, 2004 Brier champ, will be in the mix, but not as a skip. He’ll be playing third for 2005 Brier runner-up Shawn Adams. They’ll be the favourite in the eight-team field, which features another Brier medallist, Jamie Danbrook (Bronze in 2011 with Brad Gushue), as well as the Nova Scotia champs from 2014, Jamie Murphy, and 2015, Glen Macleod. Regardless of who wins, they’ll be forced to play in the Brier pre-qualifying round before the main event starts in Ottawa. The women’s event also has some top-tier talent in the field. Mary-Anne Arsenault will be looking for her 13th trip to the Scotties, where she’s already won five national titles (and two world championships). Arsenault, who would be looking for her fourth provincial title as a skip (the others came as third for Colleen Jones), will have to face former Canadian junior champion, and former provincial Scotties champ, Jill Brothers. Also in the mix is Theresa Breen, who played in four national Scotties with Anne Merklinger out of Ontario, twice finishing with the silver medal. 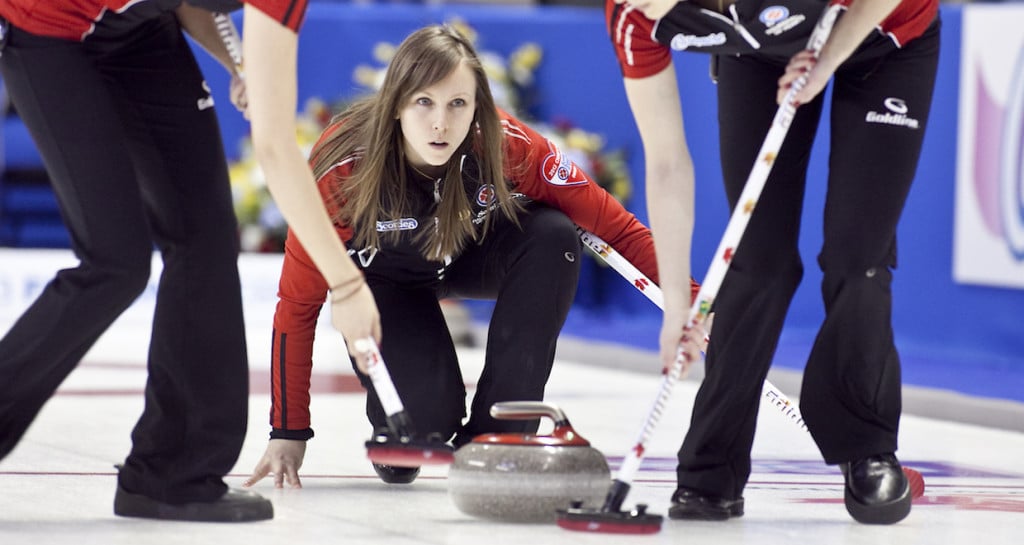 Ontario It would be foolish to say that Ottawa’s Rachel Homan wasn’t the favourite going into the Ontario Provincial Scotties in Brampton, but that’s not to say that there won’t be some excellent contenders. For the past two years, with Homan owning the Team Canada spot, Julie Hastings and Allison Flaxey have each won the right to represent the province. Then, of course, there’s seven-time Ontario champion Sherry Middaugh, who is always in the mix. Add in Julie Tippin and Jacqueline Harrison and you have five of the top-20 teams in Canada in a ten-team event (Hastings is currently ranked 28th). Even with all the quality in this field, Homan is currently the best team in the world, and should be on top at the end of the week. Northern Ontario The four-team Northern Ontario playdown features two names we’ve seen a lot of recently. We’ve seen both Tracy Fleury (formerly Horgan) and Krista McCarville (formerly Scharf) win the Ontario-wide title, before the northern association claimed their own spot at the Scotties last year. Both teams have national Scotties experience, and with Fleury currently ranked fifth on the CTRS list, she might have the edge. McCarville, however, has four bonspiel wins this season, and sits in the 11th spot on the CTRS ranking. These two will likely meet in the final, and then it’s anybody’s game. 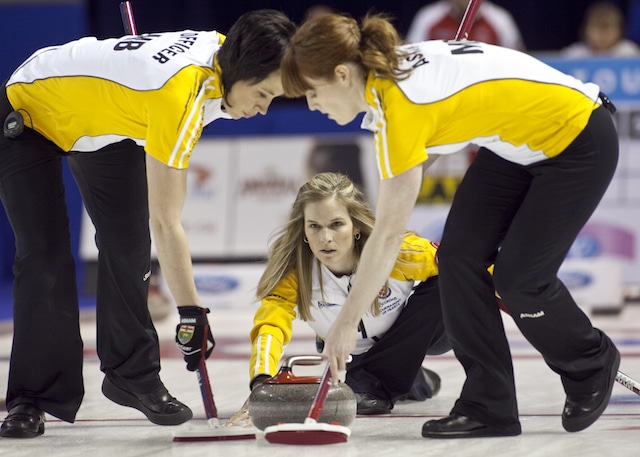 Manitoba With Jennifer Jones wearing the maple leaf as Team Canada, the buffalo crest will go to one of the other 16 teams competing at the Manitoba provincials this year. Like Ontario, Manitoba has a pile of teams in the CTRS top 20 (five, not including Jones). The Manitoba Curling Association gave Kristie McDonald the number one seed, even though Kerri Einarson ranks higher on the CTRS list. McDonald, on the other hand, sits higher on the World Curling Tour Order of Merit, which is based on two seasons worth of results. Regardless, they are two top-tier teams and will likely be among the finalists. Cathy Overton-Clapham returns to the provincial championship, looking for her 13th trip to the Scotties, and second as a skip. Also in the mix are Barb Spencer (CTRS No. 16) and Shannon Birchard, who won the provincial junior title in 2013, before winning silver at the M&M Meat Shops Junior National Championship. Alberta As we continue to move west, there’s much of the same. Alberta also has five teams in the CTRS top 20, led by defending provincial champion Val Sweeting. Sweeting, who lost the finals of the last two national Scotties (once to Homan, once to Jones), may be the favourite, but Chelsea Carey, Kelsey Rocque, Shannon Kleibrink, and Casey Scheidegger will certainly not make it easy on her. The North Hill Curling Club in Calgary will host the event, which will certainly be one to watch. 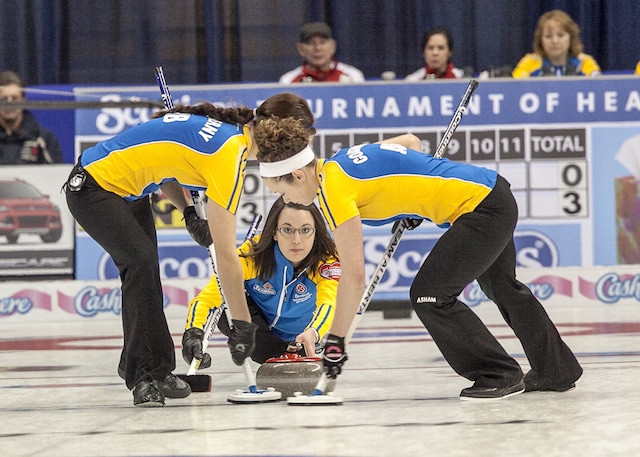 British Columbia British Columbia is a different story. While some provinces have a pile of top contenders, B.C.’s highest CTRS ranking is 33, where you’ll find two-time Scotties champion (and 2007 world champion) Kelly Scott. Looking for her ninth trip to the Scotties, she’ll have to face defending BC champion Patti Knezevic and 2014 champ Kesa Van Osch. Diane Gushulak, a three-time provincial Scotties champion (two in B.C., one in Ontario) is also looking for another chance to wear the blue and white. Because of Knezevic’s 1-10 record at the 2015 Scotties, whoever wins will have to play in the pre-qualifying round at this year’s national championship.