There were surprises, disappointments and out-and-out shockers across the country as the fields started filling up for the 2016 Scotties Tournament of Hearts and Tim Hortons Brier. 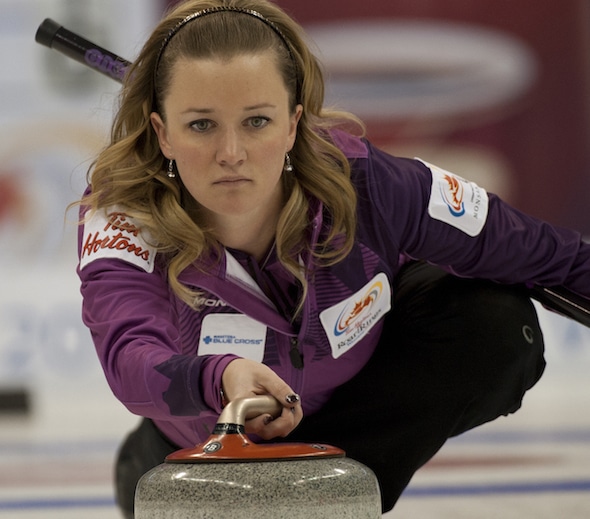 Chelsea Carey is headed back to the Scotties after winning the Alberta title on Sunday. (Photo, Curling Canada/Michael Burns)

On the women’s side, favourites Rachel Homan in Ontario, Val Sweeting in Alberta and Kelly Scott in B.C. stunningly fell short in their respective provincial finals.

On the men’s side, though, two teams with plenty of Tim Hortons Brier pedigree nailed down Purple Hearts to advance to the Big Show in Ottawa.

Here’s a look at how things shook down on Sunday in qualifying for the Canadian men’s and women’s championships.

Nova Scotia — Jillian Brothers of Halifax was an 8-5 winner over Canadian Curling Hall of Famer and four-time Scotties Canadian champ Mary-Anne Arsenault of Dartmouth in the final at the Mayflower Club in Halifax. It was Brothers’ third Nova Scotia crown, and her second as a skip. She’ll be joined in Grande Prairie by third Sarah Murphy, second Blisse Joyce and lead Teri Udle.

Quebec — A familiar face is coming back to the Scotties as Marie-France Larouche of Levis won her ninth Quebec championship with an 8-5 win over defending champ Lauren Mann of Montreal. Mann had to leave the provincials, played in Valleyfield, due to a family emergency. Larouche, who won Scotties silver in 2004 and bronze in 2009, is backed up by third Brenda Nicholls, second Annie Lemay and lead Julie Rainville. It was Larouche’s first provincial title since 2012.

Ontario — In arguably the most stunning result of the day, Jenn Hanna stole two in the seventh end and three more in the eighth to beat Homan 10-8 in an all-Ottawa title game at Brampton. Hanna, whose team is rounded out by third Brit O’Neill, second Steph Hanna and lead Karen Sagle, last won the Ontario title in 2005, and went on to take silver that year, losing the national final to Jennifer Jones in St. John’s. Jones, with her Team Canada foursome, will also be in Grande Prairie.

Manitoba — With Team Jones not in the mix, it opened the door for Kerri Einarson to finally win her first provincial title, after losing the past two Manitoba finals (to Jones last year, and to Chelsea Carey in 2014). Einarson was a 7-5 winner over Kristy McDonald in the all-Winnipeg 2016 final. Her team is rounded out by third Selena Kaatz, second Liz Fyfe and lead Kristin MacCuish.

Alberta — After a crushing loss to Sweeting in the Page A-B playoff game Saturday night when she was heavy with her last-rock draw for the win, Carey’s Calgary team got revenge in style in the final, beating Sweeting 8-5, and ending Sweeting’s bid for a three-peat. Carey will have third Amy Nixon, Jocelyn Peterman and lead Laine Peters with her in Grande Prairie; Peters won the 2012 Scotties playing lead for Heather Nedohin, while Nixon was the 2006 Olympic bronze-medallist with Shannon Kleibrink.

B.C. — Karla Thompson of Kamloops proved that her stunning comeback win over two-time Canadian champ Kelly Scott of Kelowna was no fluke by romping to an 11-3 victory in the title game. On Saturday night, Thompson fell behind 7-0 after three ends against Scott before rallying to win 11-10. Thompson, who also won the 2008 provincial title playing third for Allison MacInnes, is backed up by third Kristen Recksiedler, second Tracey Lavery and lead Trysta Vandale. B.C. will be in the pre-qualifying round with the Yukon, Northwest Territories and Nunavut. 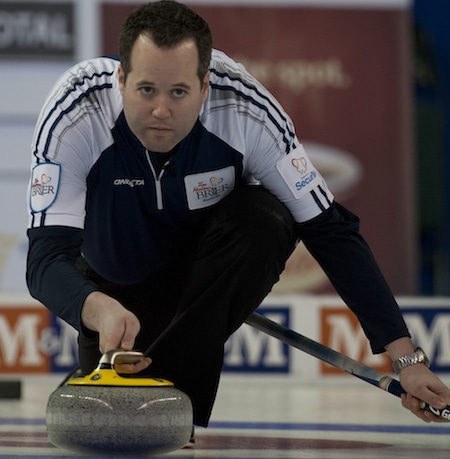 Nova Scotia — Jamie Murphy won his third title in five years in unexpected fashion on Sunday at the Mayflower Club in Halifax. Paul Flemming, throwing last rocks for Team Chad Stevens, had an open shot to backing in the back four-foot for the win, but his draw was overswept and slid by Murphy’s shot stone, giving Murphy the steal and the Purple Heart. Murphy’s team includes third Jordan Pinder, second Scott Saccary and lead Philip Crowell. Nova Scotia will be in the pre-qualifying round with the Yukon, Northwest Territories and Nunavut.

Quebec —  Jean-Michel Ménard won’t have far to go to attend his ninth Tim Hortons Brier. He lives just across the Ottawa River from the nation’s capital, in Gatineau, so he’ll have some hometown support at TD Place. Ménard, the 2006 Brier champ, beat Pierre-Luc Morissette of Saguenay 6-4 for his fourth straight Quebec title. He’ll have third Martin Crête, second Éric Sylvain and lead (and younger brother) Philippe Ménard with him at TD Place. 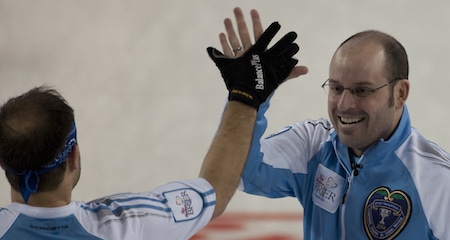 Jean-Michel Ménard, right, and his younger brother Philippe are headed back to the Tim Hortons Brier, near their hometown of Gatineau, Que. (Photo, Curling Canada/Michael Burns)

A few teams had already been decided earlier this month. At the Tim Hortons Brier, Nunavut will be represented by Iqaluit’s Wade Kingdon while the Yukon is sending Bob Smallwood’s team from Whitehorse.

At the Scotties, Nunavut will be represented by Geneva Chislett of Iqaluit; the Yukon has Nicole Baldwin calling the shots, while Suzanne Birt won her ninth P.E.I. title to advance to the national championship.

The Scotties field will be rounded out next Sunday (Jan. 31), with provincial championships in Newfoundland/Labrador, the Northwest Territories, New Brunswick and Saskatchewan.

Meanwhile, three more reps for the Tim Hortons Brier will be decided next weekend, with championships on tap in Newfoundland/Labrador, the Northwest Territories and Prince Edward Island.

To purchase tickets for the 2016 Scotties Tournament of Hearts, go to: https://www.curling.ca/2016scotties/tickets/