STRATFORD, Ont. — Yes, for the record. She’s seen the video. Many, MANY times.

And, also for the record, Alberta skip Selena Sturmay never gets tired of it. Hard to blame the 17-year-old and her team from Airdrie, because her game-winning shot in the women’s final of the Alberta junior championships, back on Jan. 6 in Wainwright has gone viral with a capital V. 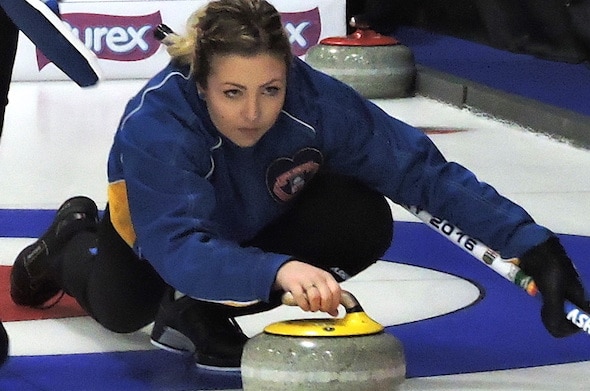 The long runback double takeout to remove two  Kayla Skrlik counters biting the button, and leave one of her own stones counting for the victory, left the crowd in Wainwright stunned — just as stunned as the winners themselves.

Click on the picture above to see the video

“Honestly? It probably didn’t really sink in until three or four days after we won,” said Sturmay, who skipped Team Alberta to a 9-4 win over Quebec’s Laurie St-Georges (Lac-sur-le-Lac) to improve to 2-0 in the early going at the 2016 Canadian Junior Curling Championships, presented by Egg Farmers of Ontario, at the Stratford Rotary Complex. “I just kept watching the shot over and over again as it went viral online, and I still couldn’t believe it. I’ve had Facebook messages from people all across Canada telling me that it was an unreal shot.

“I thought it could have been there, but it wasn’t very make-able. I was actually hoping for the blank and hoping to score one in the 11th. But the curling gods were in our favour, I guess, and it stuck around for the win.”

Against Quebec (2-1), Sturmay delivered another clutch shot — a draw to bite the pin in the eighth end while looking at two Quebec stones on either side of the button to go up 7-4.

“It was a huge shot, definitely, to go up three,” said Sturmay. “But the ice has been consistent all week, so we knew what draw weight was and I was really confident in our sweepers that they could get it there. It was a great team shot all the way around. It could have ended up real bad, but we felt we could at least cut them down to one or score one.”

There are two Sturmays playing here this week; her big brother Karsten is skipping the Alberta men for the second straight year.

“He definitely said to take in the moment and not get too caught up in the result,” said Selena. “Just stick with the process, stick with every rock, every game and not take anything for granted. Just take in everything that the nationals have to offer.”