STRATFORD, Ont. — Kyle Doering is hardly shy about explaining one of the more awkward, and potentially embarrassing, situations that you can have in the sport of curling. 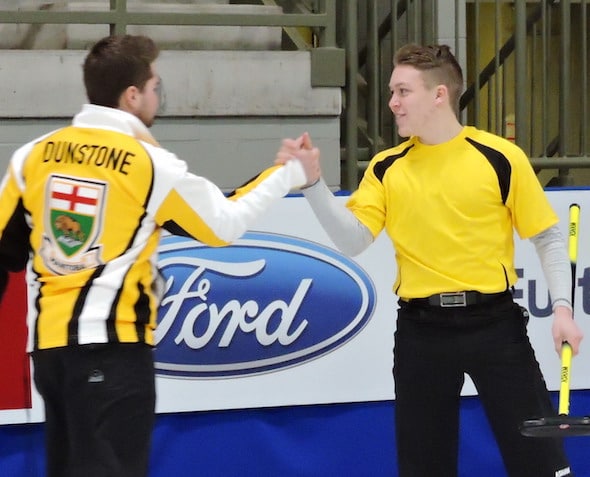 The 20-year-old Team Manitoba vice-skip (throwing second rocks), while playing at the juvenile (U-18) provincials a few years ago, was in the enviable position of having seven rocks in the rings, and about to deliver the eighth for curling’s rarest feat — an eight-ender.

And he missed. Light. Ouch.

“My teammates at the time still talk about it to this day,” a smiling Doering said on Monday at the Stratford Rotary Complex, moments after helping Matt Dunstone’s Manitoba men’s team improve to 5-0 at the Canadian Junior Curling Championships, presented by Egg Farmers of Ontario, with a 9-4 win over Alberta’s Karsten Sturmay.  “ ‘Remember when we had that eight-ender chance?’ Oh, yeah, I remember.”

His current teammate Colton Lott was holding the broom that day for Doering’s attempt.

“Draw to the eight-foot,” recalled Lott. “We hadn’t even played a shot there the whole game, and it was an outturn coming into the middle. It was frosty out there. They just pounded it the whole way and it was just a little short. It’s one of those chances you get; you make it, you make it. You miss it? Oh, well. It was a complete guess at the weight.”

Doering, a bronze-medallist at the 2012 Canadian Juniors, had mixed emotions as he prepared to throw the shot; the game was already in the bag and it was a given his opponents were going to shake hands afterward, and he didn’t want to rub it in, so he lowered his intensity level despite the potential thrill of the eight-ender out of respect for his opponents.

“I still tried to make it as best as I could, but way out in the weeds on Sheet 1 at the Assiniboine Club? That was all she wrote,” he said with a laugh. “If I get another chance? Oh, I’ll be intense. I’m going to follow that rock down the ice, take my time, and I’m going to make that shot, that’s for sure. Because I know how rare it is.”

The win over Alberta (2-2)  clinched a championship round berth for the Manitobans (rounded out by lead Rob Gordon and coach Calvin Edie), while Alberta dropped to 2-2 in Pool A.

Upon completion of the Championship Round, the top team of each gender advances to its respective final, while the second- and third-place finishers meet in a semifinal to determine the other finalist.

All members of the non-playoff teams will then compete in a Mixed Doubles competition on Saturday and Sunday.

In Pool B, B.C.’s Tyler Tardi (New Westminster/Langley) also is at 5-0 after cruising to a 10-2 win over the Yukon’s Brayden Klassen (0-3; Whitehorse), while Northern Ontario’s Tanner Horgan (4-1; Copper Cliff) kept pace with the leaders by beating the Northwest Territories’ Matt Miller (0-4; Inuvik) 13-3.

In other men’s play, Newfoundland/Labrador’s Greg Smith (1-2; Stephenville) hung on for a 9-8 win over previously unbeaten Félix Asselin of Quebec (2-1; Montreal); and New Brunswick’s Alex Robichaud (2-1; Moncton) scored four in the ninth end for a 7-4 win over P.E.I.’s Matt MacLean (1-4; O’Leary).