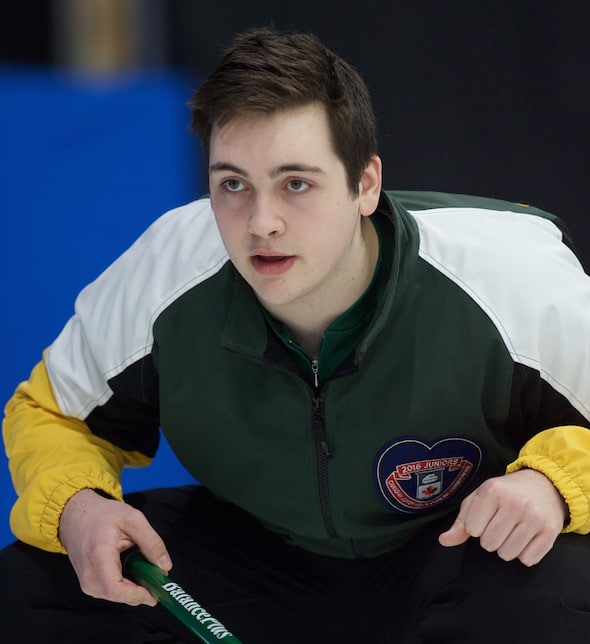 Northern Ontario skip Tanner Horgan clinched a berth in the Championship round with a win on Tuesday. (Photo, Curling Canada/Bob Wilson)

But it’s not just the effect it may (or may not, depending on whom you talk to) have on the rock. Horgan, in his third straight Canadian Junior Curling Championships, presented by Egg Farmers of Ontario, says the new sweeping techniques have forced his team to ramp up its communication — a big reason why his team from Copper Cliff has taken a significant leap forward this season.

“I think a big thing was adding a bit of complexity with our sweeping,” said Horgan, 17, a Grade 12 student. “It forces us to work together and really communicate. I think we lacked a bit of communication last year, and now it’s sink or swim with the sweeping, right? And we’re swimming now.”

No doubt about that, as the Horgan foursome — rounded out by little brother Jacob at vice-skip, Nick Bissonnette  at second, Maxime Blais at lead and the Horgans’ dad, Gerry, at coach — ended the Preliminary Round with a 5-1 record on Tuesday at the Stratford Rotary Complex following a 7-4 win over 2015 silver-medallist Jake Hersikorn of Saskatchewan (3-2; Saskatoon).

Northern Ontario will finish second in Pool B, behind B.C.’s Tyler Tardi (6-0; New Westminster/Langley), who finished the Preliminary Round with an 8-2 win over New Brunswick’s Alex Robichaud (3-2; Moncton).

“That was a very big game for us; we’re 5-1 now, so I think we can go 2-2 in the Championship round and still be in a good position to make the playoffs,” said Horgan.

Horgan, whose older sister Tracy Fleury lost in the Northern Ontario Scotties provincial final on Sunday, has finished 5-5 at the past two Canadian Juniors, and reached the Championship Round both times; interestingly, he was 2-4 in the 2015 Prelims before going 3-1 in the Championship Round, which gave his team a boost coming into 2016.

“We had a shaky start last year; I had a knee injury and we just weren’t feeling comfortable,” he said. “But then we started figuring things out. It gives us lots of confidence knowing that we can go 3-1 against the top half from the other pool, and if we can do that again this year, then that’ll be fantastic.”

In the other Pool B men’s game, Matt Miller of the Northwest Territories (1-5; Inuvik) was an 8-4 winner over Brayden Klassen of the Yukon (0-5; Whitehorse).

In Pool A, Quebec’s Félix Asselin (4-1; Montreal) locked up a spot in the Championship Round with an 8-4 win over Alberta’s Karsten Sturmay (3-3; Edmonton). Quebec trails only Manitoba’s Matt Dunstone (5-0; Winnipeg) in Pool A, and those teams play tonight for the Pool A title.

Saskatchewan’s Kourtney Fesser has guided her team to the Championship Round. (Photo, Curling Canada)

In women’s play, B.C.’s Sarah Daniels (5-0; New Westminster) locked up first place in Pool B with a 7-4 win over previously unbeaten Mary Fay of Nova Scotia (5-1; Chester). Fay had a draw to force an extra end but came up short to seal the win for B.C. Nova Scotia also will move onto the Championship Round.

Manitoba will play Alberta’s Selena Sturmay (4-1; Airdrie) this evening to decide second place in the pool.

In other Pool A play, Northern Ontario’s Megan Smith (2-3; Sudbury) was a 13-3 winner over Zoey Walsh of the Northwest Territories (0-5; Hay River).

Action at the 2016 Canadian Juniors continues Tuesday with the final Preliminary Round draw, at 6:30 p.m. (all times EST).