STRATFORD, Ont. — The standings boards are suddenly proving to be very intriguing at the 2016 Canadian Junior Curling Championships, presented by Egg Farmers of Ontario. 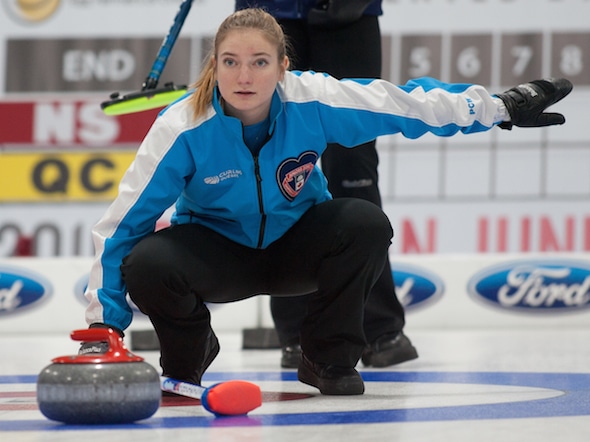 Wednesday night at the Stratford Rotary Complex, two teams — B.C.’s men’s and women’s teams, as it turned out — fell from the ranks of the unbeaten.

And with just three draws remaining before the playoffs get underway on Saturday, there should be plenty of scoreboard watching over the next two days. Or so you’d think.

“I honestly am pretty zoned out to all of that,” said Nova Scotia skip Mary Fay (Chester), whose team (third Kristin Clarke, second Karlee Burgess, lead Janique LeBlanc, coach Andrew Atherton) improved to 7-1 in the women’s Championship Round on Wednesday night with a 9-3 win over Alberta’s Kelsey Sturmay (4-4; Airdrie). “I’m kind of more focused on my games. Sometimes I’ll find out what happened in the other games, but I’m not really paying too much attention to it. I know we can only control what we do on the ice. Watching and paying attention to other teams’ games isn’t going to help us.”

Nova Scotia’s only loss came Tuesday against B.C.’s Sarah Daniels (New Westminster), whose team entered the Championship Round unbeaten before falling 7-4 to Quebec’s Laurie St-Georges (Laval-sur-le-Lac) on Wednesday night. Quebec improved to 5-3 and still alive — barely — in the chase for the three playoff spots. The first-place teams in each gender will advance to Sunday’s gold-medal games, while the second- and third-place teams will meet in semifinals on Saturday.

“It was a tough game, and we played well — not our best game, but it worked,” said St-Georges, who’s backed up by third (and sister) Cynthia St-Georges, second Meaghan Rivett, lead Emily Riley and coach (and dad) Michel St-Georges). “B.C. is a very good team, so to win this game was really important for us and we’re really proud of that.”

Quebec, though, will need some help to get in the playoff mix. Behind the leading pair of B.C. and Nova Scotia is a pair of 6-1 teams — New Brunswick’s Justine Comeau (Fredericton), who had a bye Wednesday night, and Manitoba’s Abby Ackland (Winnipeg), who was an 8-6 victor over Ontario’s Courtney Auld (3-4; Thornhill).

In the men’s Championship Round, Manitoba’s Matt Dunstone (Winnipeg) is the lone unbeaten skip at 7-0 (he had a bye Wednesday night).

B.C.’s Tyler Tardi (New Westminster/Langley), meanwhile, was knocked from the ranks of the unbeaten by Alberta’s Karsten Sturmay (Edmonton, 4-4), who cruised to an 11-3 win.

Northern Ontario’s Tanner Horgan (6-1; Copper Cliff) pulled into a tie for second with B.C. with a 6-4 win over Ontario’s Doug Kee (4-4; Navan). Manitoba, B.C. and Northern Ontario are all assured of tiebreaker berths.

In the other Championship Round men’s game, Saskatchewan’s Jake Hersikorn (4-3; Saskatoon) scored four in the 10th end for an 8-5 win over Quebec’s Félix Asselin (4-3; Montreal).

The six teams of each gender that didn’t make the Championship Round are playing Seeding Pool games to determine final rankings and set the pools for next year’s Canadian Juniors in Victoria.

The Championship and Seeding Rounds continue on Thursday with draws at 1:30 p.m. and 6:30 p.m. (all times EST).