STRATFORD, Ont. — There were some nerves, admitted New Brunswick skip Justine Comeau, but that just goes with the responsibility of throwing the last rock. 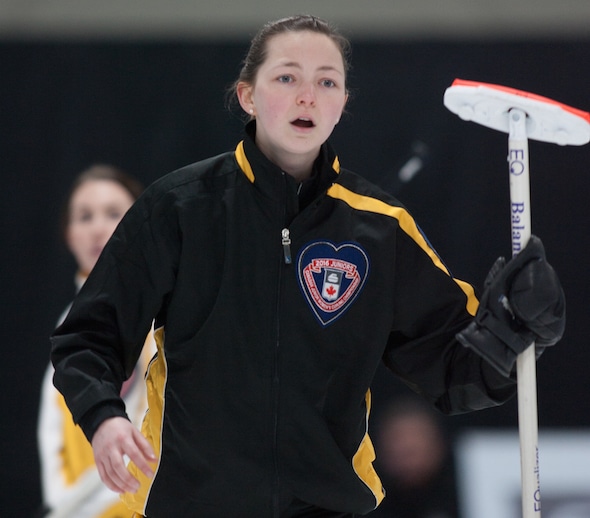 Friday afternoon at the Stratford Rotary Complex, the 17-year-old high school student from Fredericton conquered those nerves in style.

She coolly made a runback takeout with her last delivery of the game to finish off a 7-5 win over Manitoba’s Abby Ackland in a tiebreaker game to decide the third and final women’s playoff berth at the 2016 Canadian Junior Curling Championships, presented by Egg Farmers of Ontario.

“For sure there were some nerves,” admitted a smiling Comeau afterwards. “But it’s not anything I’m not used to. You have to make big shots to win big games. And I’ve had quite a few big games.”

And there is at least one more on the docket as, with the win, Comeau’s team — third Emma Le Blanc, second (and younger sister) Brigitte Comeau, lead Keira McLaughlin and coach (and dad) Tim Comeau — advances to the women’s semifinal Saturday at 2 p.m. (all times Eastern) against B.C.’s Sarah Daniels (New Westminster).

The semifinal winner will take on Nova Scotia’s Mary Fay (Chester) on Sunday at 10 a.m. for the gold medal.

New Brunswick caught a huge break in the ninth end when Ackland was drawing for an apparent go-ahead deuce. But her rock was overswept and ended up too deep for the second point, and New Brunswick took the hammer in a tie game into the 10th end, setting the stage for Comeau’s game-winner.

“That’s her bread-and-butter, the runback,” said Tim Comeau. “If you leave her that one, I feel pretty good sitting behind the sheet.”

It was a stark contrast to Thursday when New Brunswick nearly fell out of the playoff picture with back-to-back lopsided losses. But the team rebounded on Friday with a clutch win over B.C. to get into the tiebreaker.

“Looking at how we were yesterday, I’m pretty happy with how we were able to overcome that,” said Justine Comeau. “But we know we can compete for the championship. We’ve beaten both of those teams before. Not numerous times, but we know it’s a possibility. “

The entire New Brunswick team has four more years of eligibility — the front end has five — and the coach wondered whether the team was ready to shine on the national stage this quickly.

“I thought at one time that this was too big for them at this stage in their curling career. I’m not sure now,” said Tim Comeau with a smile. “They’ve got nothing at all to lose. Semifinals at their ages? That’s pretty good.”

TSN/RDS will broadcast the men’s and women’s semifinals and finals.

All players who didn’t make the playoffs will take part in a mixed doubles tournament beginning Saturday at 10 a.m.