STRATFORD, Ont. — Mary Fay and her Nova Scotia teammate Karlee Burgess have a rare, almost unheard-of, opportunity in front of them. 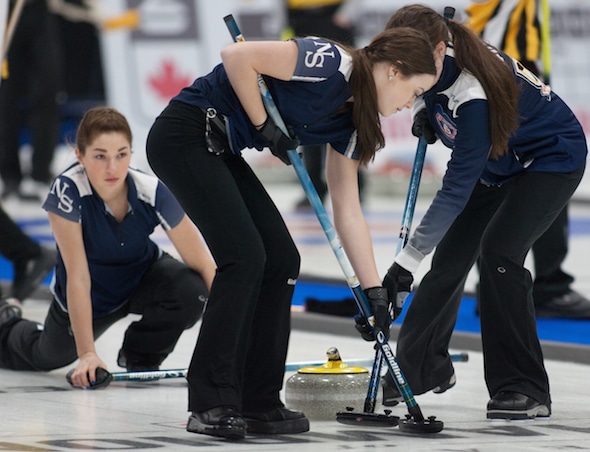 As members of Canada’s Youth Olympic team, they’re already going to be wearing the Maple Leaf internationally, at the Youth Winter Olympics next month in Lillehammer, Norway.

And on Sunday morning, 10 a.m. (all times EST), they’ll get a second chance to put on a  Team Canada jacket when they play for gold at the 2016 Canadian Junior Curling Championships, presented by Egg Farmers of Ontario.

“That would be amazing,” marvelled the 17-year-old skip from Chester. “I don’t think that words could really describe it.”

Fay, Burgess (the second for Team Nova Scotia), third Kristin Clarke, lead Janique LeBlanc and coach Andrew Atherton clinched first place in the Championship Round and a bye to the final on Friday at the Stratford Rotary Complex with an 8-6 win over Manitoba’s Abby Ackland (Winnipeg).

That result, combined with New Brunswick’s Justine Comeau (6-3; Fredericton) beating B.C.’s Sarah Daniels (7-2; New Westminster) 5-2, set up a tiebreaker for the third and final women’s playoff position between New Brunswick and Manitoba on Friday at 2 p.m.

The winner will advance to the semifinal Saturday at 2 p.m. against B.C. TSN/RDS will broadcast the men’s and women’s semifinals and finals.

Fay won bronze at the 2014 Canadian Juniors in Liverpool, and learned from that experience to savour the next 48 hours leading up to Sunday’s gold-medal game.

And there’s always homework to do; Fay has four exams to write before leaving for Norway.

“Homework is a good distraction” she said with a smile.

The men’s playoff picture, meanwhile, is clear of tiebreakers after Friday morning’s results.

And Horgan — backed up by  third (and younger brother) Jake Horgan, second Nick Bissonnette, lead Maxime Blais and coach (and dad) Gerry Horgan — said his team is ready for the moment.

“We’re not afraid at all,” said the 17-year-old high school student. “It’s what we’ve been working at the last two years, right? Our first time at nationals (in 2014), we said, yeah, we want this. We want it bad. After that, we just put everything we had into it, and now it seems like we finally have all four players throwing the best they can and making my job a little easier.

“I think we’re ready. I think we can beat anyone in the field; no matter who we get in the final, I think it’ll be a good game.”

Manitoba will enjoy last-rock advance in the semi by virtue of its 5-4 extra-end win over B.C. to close out the round robin.

All players who didn’t make the playoffs will take part in a mixed doubles tournament beginning Saturday at 10 a.m.