Manitoba has another shot at gold at 2016 Canadian Junior Championships

STRATFORD, Ont. — Matt Dunstone and Colton Lott are hoping Sunday afternoon will be worth the wait.

The Manitoba skip and third won men’s gold at the 2013 Canadian Juniors in Fort McMurray, Alta., but their return visit to the national championship was put on hold after losing back-to-back Manitoba finals to Braden Calvert, who would win the national title in 2014 and 2015. 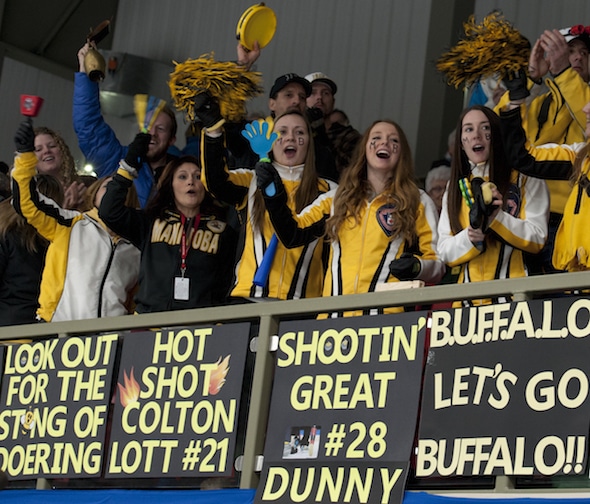 Manitoba fans had plenty of reasons to be cheering on Saturday night. (Photo, Curling Canada/Michael Burns)

Sunday morning, with two different teammates — second (and vice-skip) Kyle Doering and lead Rob Gordon — Dunstone and Lott will play again for gold at the 2016 Canadian Juniors, presented by Egg Farmers of Ontario.

An 8-3 semifinal victory over B.C.’s Tyler Tardi on Saturday night at the Stratford Rotary Complex propelled the Manitobans, coached by Calvin Edie, to the 3 p.m. (all times Eastern) gold-medal game against Northern Ontario’s Tanner Horgan (broadcast on TSN/RDS2).

“Obviously, Colton and I have been waiting this game for two and a half years now,” said Dunstone, who’s in his final year of junior eligibility. “We’re pretty pumped. We’re right where we want to be. ”

Dunstone, named the first-team all-star skip after averaging 90 per cent over the round robin, was on form again on Saturday night. He never let B.C. generate any early offence, and then delivered a beautiful draw to bite the button in the fourth end to score pair, and Manitoba would never look back.

Manitoba would add stolen points in the fifth and sixth ends, and B.C. took one in seven when Tardi nose-hit on a blank attempt, and it was just a matter of time from there.

“It’s been 10 years of something like that since B.C. got on the podium in men’s (Tyrel Griffiths won silver in 2006),” said Tardi, 17. “So I’ve got no sad thoughts; I’m pretty proud of the boys. They played great all week. Matt can make some pretty great shots; it’s hard to stop a team like that, but you have to have respect for that.”

“They’re a great team; they deserve to be in first place, they deserve to be where they are right now,” praised Dunstone. “They get up on you at all, you’re in trouble. They’re some great hitting guys — it’s going to be quite the slugfest with all the hard takeout guys out there.”

Dunstone, of course, knows a thing or two about takeouts. He made one of the most clutch in the history of the Canadian Juniors, an in-off double-takeout with his last shot of the 2013 gold-medal game against Alberta’s Thomas Scoffin to win the game — a video clip he still watches regularly.

“Maybe once a week, still,” he said. “It gives me goosebumps every time I watch it because it was such a surreal experience. Nobody really expected us to win it all.”

Colton Lott gets the low-down on one of his shots on Saturday night. (Photo, Curling Canada/Michael Burns)

Interestingly, though, he has yet to watch it this week in Stratford.

“I might go do that tonight,” he said with a smile. “Maybe we’ll get some inspiration for tomorrow.”

(By the way, you can watch the 2013 men’s gold-medal game by clicking here; fast-forward to roughly the two-hour, 23-minute mark to see Dunstone’s game-winner)

There will be plenty of history on the line Sunday. Manitoba is attempting to win its fourth straight Canadian junior men’s title, matching Saskatchewan’s record four straight wins from 1949 through 1952.

Dunstone and Lott could win gold medals three years apart — a feat matched by only one curler, male or female, in the history of the Canadian Juniors: Alberta’s Scott Pfeifer, who won in 1994 and 1997.

Doering and Lott also have a Canadian Juniors bronze on their resume; they finished third as skip and third respectively of Manitoba in 2012 at Napanee, Ont.

Manitoba is playing for its 12th Canadian junior men’s title, while Northern Ontario is going for its fifth, and first since 1996 when Jeff Currie prevailed in Edmonton. His opponent that day: none other than Manitoba’s Ryan Fry, who now curls out of Northern Ontario.

The women’s gold-medal game is scheduled for 10 a.m. (TSN/RDS2), and will feature Fay’s Nova Scotia team against B.C.’s Sarah Daniels.

Sunday’s gold-medallists will represent Canada at the 2016 World Junior Championships in Taarnby, Denmark, in hopes of defending the gold medals won last year by Canada’s Kelsey Rocque and Braden Calvert.

All players who didn’t make the playoffs are taking part in a mixed doubles tournament beginning Saturday at 10 a.m.