Four in a row for Manitoba men at Canadian Junior Championships 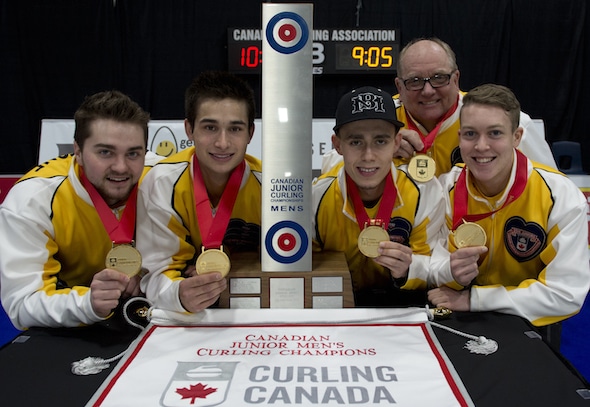 Dunstone won gold in 2013 at Fort McMurray, Alta., and watched from home as fellow Manitoban Braden Calvert prevailed in 2014 and 2015.

But Sunday’s victory was worth the wait, said the 20-year-old skip.

“It’s just as satisfying, for sure,” said a jubilant Dunstone, whose team is rounded out by third Colton Lott, second (and vice-skip) Kyle Doering, lead Rob Gordon and coach Calvin Edie. “It doesn’t change; this is awesome. I’m so proud of these guys; they worked so hard for this, and we couldn’t be happier, obviously.”

Lott was a member of the 2013 team as well, and a year earlier he and Doering were teammates on a Manitoba team that won bronze at the 2012 Canadian Juniors in Napanee, Ont.

But Dunstone made two pistols in the second end — the first, a precision long runback takeout to sit two, and when Tanner Horgan missed his final shot, Dunstone coolly drew to bite the button for a go-ahead three.

“Those were such a great pair of shots,” said Lott. “Especially after I crashed on a guard on my shot. It was phenomenal; Matt played great. I wouldn’t want another skip in the world to throw those shots.”

Manitoba would add a stolen three in the third end on another Horgan miss, and then made a wonderful in-off takeout in the sixth end for a third three-ender.

It was that kind of day for Northern Ontario skip Tanner Horgan, but his future is very bright. (Photo, Curling Canada/Michael Burns)

“I don’t think they missed. They’re an amazing team; how are they a junior team? They’ll do just fantastic at the worlds,” said the classy Horgan, 17, who’ll play in the Northern Ontario men’s championship, with his first game against none other than 2014 Olympic gold-medallist Brad Jacobs. “I think there’s lots of room for growth with our team. We’re so young, we have so many more years ahead and I’m excited to see what we can do in a few years.”

Dunstone’s team will head to Taarnby, Denmark, for the 2016 World Juniors, March 5-13, looking to make it back-to-back gold medals for Canada after Calvert’s victory last year in Estonia, and to improve on the bronze medal Dunstone and Lott won in 2013.

“Going back three years ago, we felt robbed, for sure,” said Dunstone. “We have gold on our minds, and if we keep playing like we did in this playoff round, we should be right there.”

Manitoba’s four straight wins matches the Saskatchewan record of four in a row, set between 1949 and 1952. It was the province’s 12th Canadian junior men’s crown.

“We have such a strong junior program from head to toe,” said Dunstone. “We all make each other better; Braden makes us better, we make Braden better, and there are a lot of other guys that you have to work to be better than. We just all feed off each other.”

The 2017 Canadian Juniors will be played in Victoria.