Mary Fay and Karlee Burgess will need an extra closet to store all of their Team Canada gear from this season. 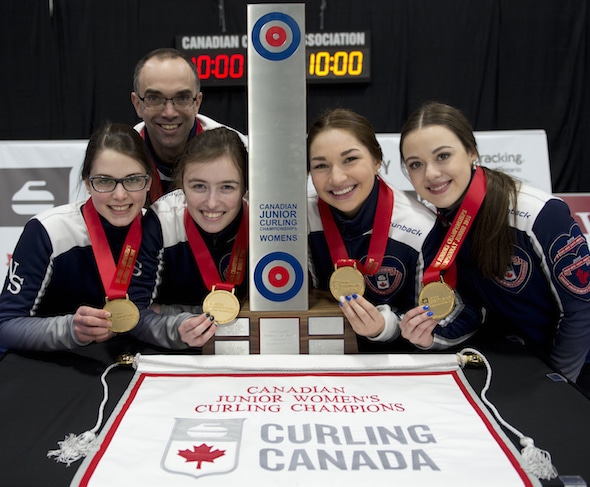 Already bound for the Youth Winter Olympics next month in Lillehammer, Norway, the skip and second respectively for Team Nova Scotia will also wear the Maple Leaf at the World Junior Curling Championships after winning gold Sunday at the 2016 Canadian Juniors, presented by Egg Farmers of Ontario.

A clutch eighth-end draw by the 17-year-old Fay quelled a furious B.C. comeback from what had been a 5-2 Nova Scotia lead through four ends, and propelled Nova Scotia to its fourth Canadian junior women’s title, and first since Jill Brothers (Mouzar) won in 2004.

“I can’t even put it into words,” said Fay. “It’s the most amazing feeling ever. I don’t even know if it feels real yet. It’s just so hard to believe.”

B.C. had tied the game with a single point in the fifth end, and stolen singles in the sixth and seventh ends, but a marvellous peel-weight takeout from Clarke in the eighth end cleared the front of the house, and set the stage for Fay to make her crucial draw.

“It felt great to make that draw,” said Fay. “Whenever I’m throwing a draw, I always feel confident because I have Karlee and Janique sweeping for me. They have the hard job; it’s not to too hard to throw it, but to judge the weight? But I have two amazing sweepers and I’m confident in them.”

A stolen pair in the ninth added some insurance, and Nova Scotia ran B.C. out of rocks in the 10th.

“Holy. I don’t even know how to explain it,” said an ecstatic Burgess. “Going into the last end, we knew we just had to throw clean shots and Mary would have an open shot at the end. When we finally got there? Wow, it was unbelievable.”

“We’re all really proud of each other,” said Sarah Daniels, 16. “I know there will be tears because it sucks to lose, but we’re really happy for Mary’s team because they’ve worked so hard, and they’ve waited for this for so long. We’re just going to take away everything we can from this. We’ve learned so much from this competition, and we’ll push harder to get better next year.”

Atherton started working with Fay when she was just eight years old, so Sunday’s victory was especially sweet from a coaching standpoint.

“A long time ago. A lot of rocks, a lot of practices with just the two of us,” said an emotional Atherton. “I’m pretty proud of her.”

Fay and Burgess will be joined by Tyler Tardi (who skipped the B.C. men to a bronze medal here) and Sterling Middleton at Youth Olympics next month. Then, she’ll turn her sights to the 2016 World Juniors, March 5-13 in Taarnby, Denmark.

“It’s going to be amazing,” said Fay. “It’s a dream come true to be able to represent Canada, and to be able to do it twice? It’s beyond words.”

The 2016 Canadian Juniors will conclude with the men’s gold-medal game at 3 p.m. EST, between 2013 champ Matt Dunstone of Manitoba (Winnipeg) and Tanner Horgan of Northern Ontario (Copper Cliff). The game will be broadcast on TSN/RDS2.