Another weekend of provincial and territorial playdowns across the country resulted in some very familiar faces (see you in Ottawa, Brad Gushue) booking their tickets to the 2016 Scotties Tournament of Hearts in Grande Prairie, Alta., and the 2016 Tim Hortons Brier in Ottawa. 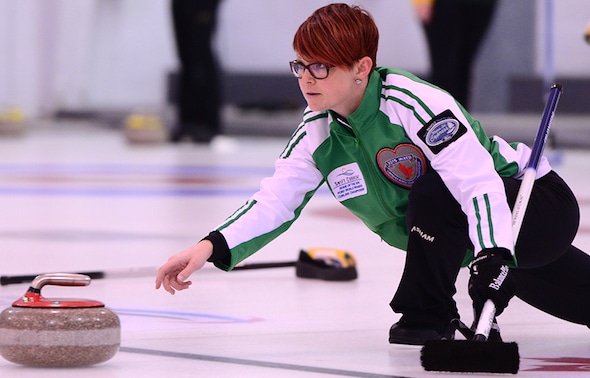 Regina’s Jolene Campbell won her first Saskatchewan women’s title on Sunday, and will play at the 2016 Scotties Tournament of Hearts in Grande Prairie, Alta.

As of Sunday, the field is now filled for the 2016 Scotties. You can find the complete list of teams, as well as the full schedule and ticket information, at https://www.curling.ca/2016scotties/

Meanwhile, the rest of the field for the 2016 Tim Hortons Brier (team listings, schedule and ticket information at https://www.curling.ca/2016brier/) will be determined over the next two weekends.

One more team could be known on Monday as Adam Casey has won the A- and B-Event titles in the Prince Edward Island championship at Charlottetown, and if he wins the C-Event title on Monday, he would have back-to-back provincial titles.

Here’s a look at this weekend’s winners.

New Brunswick — Moncton’s Sylvie Robichaud made it back-to-back New Brunswick titles on Sunday, hanging on for a narrow 7-6 win over Fredericton’s Melissa Adams in the final at Curl Moncton. It was Robichaud’s third New Brunswick women’s championship. Robichaud, backed up by third Rebecca Atkinson, second Marie Richard, lead Jane Boyle and coach Charlie Sullivan, will be looking to improve on her 4-7 record at the 2015 Scotties in Moose Jaw, Sask.

Saskatchewan — Regina’s Jolene Campbell dethroned two-time defending champ Stefanie Lawton of Saskatoon on Sunday in Prince Albert. Campbell, backed by third Ashley Howard (Russ’s daughter), second Callan Hamon and lead Ashley Williamson, stole two in the fourth end en route to a 7-4 victory. Campbell, the 2015 Canadian mixed champ playing third for Max Kirkpatrick, will be making her fourth trip to the Scotties, but her first as a provincial champ. She was an alternate for Amber Holand’s team in 2010, 2011 and 2012.

Northwest Territories — It will be a 10th trip to the Scotties for newly crowned Northwest Territories champ Kerry Galusha. Her Yellowknife team — third Megan Cormier, second Danielle Derry, lead Shona Barbour and alternate Sharon Cormier — downed Judy Goucher’s Hay River team from the host club 10-6 in Sunday’s final. The Northwest Territories will be in the pre-qualifying round, beginning Feb. 18, with Nunavut, the Yukon and British Columbia, playing off for the final berth into the main Scotties field.

To purchase tickets for the 2016 Scotties Tournament of Hearts, go to: www.curling.ca/2016scotties/tickets/

Newfoundland/Labrador — Brad Gushue has another Purple Heart for his extensive collection after claiming his 13th provincial title. Gushue, backed up by third Mark Nichols, second Brett Gallant and lead Geoff Walker, was an 8-1 winner over Colin Thomas in Sunday’s championship game at St. John’s. It was Gushue’s 10th consecutive championship; his team finished fourth at the 2015 Tim Hortons Brier in Calgary.

Northwest Territories — It was another sweep for the Koe family after Kerry Galusha’s twin brother Jamie Koe won his 10th Tim Hortons Brier Purple Heart, and eighth straight. Koe, third Chris Schille, second Brad Chorostkowski and lead Robert Borden beat another Yellowknife team, skipped by Greg Skauge, 8-3 in the final at Hay River. The Northwest Territories will be in the Tim Hortons Brier pre-qualifying round with Nova Scotia, the Yukon and Nunavut for the 12th and final spot in the main round robin.