This week, John sits down with a man who needs no introduction, the reigning Olympic gold medallist, 2013 Canadian champion, and 2015 silver medallist, Brad Jacobs. A divisive force of nature, Jacobs has led his crew to numerous successes but perhaps should be better known for his candour off the ice. It was great to sit down with Brad as he prepares to go after his sixth consecutive Brier appearance (if you don’t count the one where he was busy at the Olympics). Welcome to Magical Question Fun Time, the new Curling Canada feature where comedian John Cullen sits down with your favourite curlers for interviews like you have never seen. Each interview will feature eight questions: five standard questions that will be asked to each curler, two questions specific to that curler, and one question that the curler interviewed before them asks. 1. What’s the nicest shot you’ve ever been a part of? Brad Jacobs: Well, I think it’s obvious, the shot against Kevin Martin in the 2013 Olympic Trials to clinch first place and a spot in the final. The shot was huge because it represented the opportunity to play for the chance to represent Canada in the Olympics, and it really propelled our confidence for that final. After that, I think we felt at that point our destiny was in our own hands. 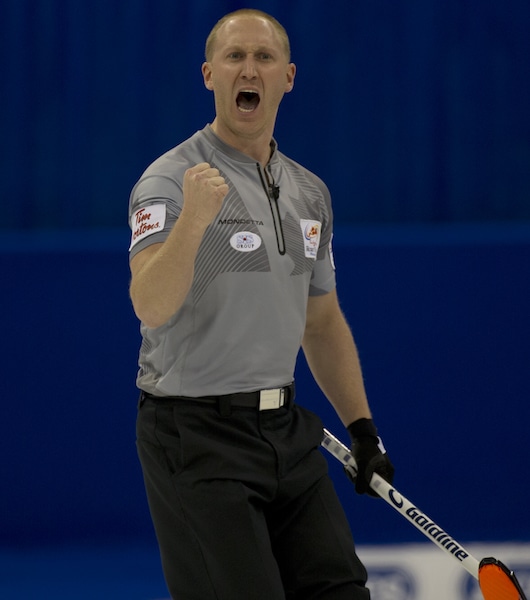 John Cullen: How many times have you watched the replay? BJ: I’ve definitely seen it a lot. (laughs) I mean, winning the gold and the Brier were both great moments, but that specific shot was the best shot our team has ever been a part of, and it’s impossible to relive it without getting goosebumps. JC: And the famous celebration after, which I feel has spawned a lot of curling teams accepting larger celebrations as part of the game. BJ: I think there have been lots of curling celebrations, but people could tell there that the emotion was so real that it really stands out in its own league. It’s what made people pay attention and that’s why I think more curlers are celebrating now. 2. Who could you take in a fight? BJ: (Ryan) Fry, I think I could take Fry for sure. JC: Yeah, I probably wouldn’t want to fight the Harndens either. (laughs) BJ: I mostly just want to fight him because the whole team picks on Fry, and so I think to keep that going, I would say Fry for sure. Fry and I definitely get bugged the most on the team, and I’m sure that if you asked him the same question, he would say he could take me in a fight. JC: Who wins in a tag team match, you and Fry vs. the Harnden brothers? BJ: Harndens, for sure. Impossible to win when you have two men fighting against a man and a half. (laughs) And just to clarify, Fry is the half. (laughs) 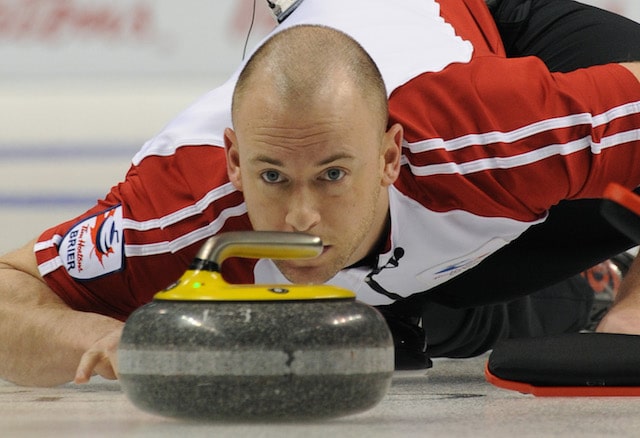 3. If a deli named a sandwich after you, what would be on it? BJ: (laughs) Is this actually the question? JC: (laughs) Yes, of course! You knew what this interview was when you got into it. BJ: I know, but like…what am I supposed to say? Like what lunch meat I like? I don’t even know. Lots of protein, lots of veggies, we’ll keep it healthy. I like a little Italian and a little bit of mayo on there, and lots of salt and pepper. Gotta keep it tight. JC: I guess that is important. What would you call the sandwich? BJ: Let’s call it the “Keeping It Tight”. (laughs) The guys on the team always bug me because they’ll always order things like sandwiches, pasta, burgers, a ton of carbs. I don’t sweep so I can’t burn that stuff off. So I’ll order salads and they always bug me, but I just tell them, “gotta keep it tight.” (laughs) 4. What’s the worst job you’ve ever had? BJ: This is a tough one, because looking back, honestly, I’ve had a lot of really good jobs. I’ve been very fortunate. Probably the worst, and it was still a good job, but the worst of the jobs I had was doing drywalling. I did it for two summers. I learned a lot and it wasn’t a “bad job”, but in terms of how hard the work was and how dirty it was, it was probably the worst. JC: I feel that. I worked in a warehouse for two summers and I can always remember going back to school and it would take legitimately weeks before I cleared the dust out of my lungs. BJ: Oh, for sure. Ears, eyes, mouth, nose, it was everywhere. I remember getting home and just having the longest showers of my life. 5. If you could have a custom letterman’s jacket made and you could put any patches on it you want, what would the patches be? 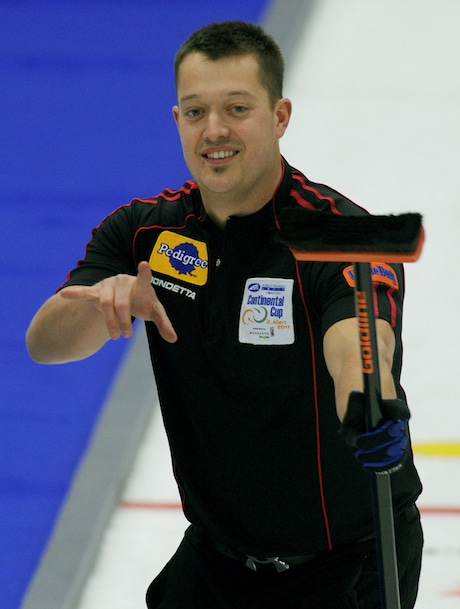 BJ: I would put on a Nobis patch, because I want the jacket to be Nobis. (laughs) And their logo is amazing. JC: I see how you roll, working the sponsors in here, I get it. BJ: Honestly, their jackets are the most comfortable things ever. We went into their store one day and just tried on all of their jackets, and every single one of them is insanely comfortable. We got very lucky with our sponsorship there. 6. Alright, now we are on to the Brad Jacobs-specific questions. Now, you are well-known for using the insult “pigeon” to describe things or people you think are weak. If you could give me your top-5 Pigeon Power Rankings right now, who would they be? BJ: I’ll be honest, I think that saying is kind of done, it’s ran its course. It was obviously started by Ben Hebert, and he seems content to keep going with it, so I’ll just say the top 5 pigeon rankings right now are: Number 5, Ben Hebert. Number 4, Ben Hebert. Number 3, Ben Hebert. Number 2, Ben Hebert. And number 1…Ben Hebert. JC: (laughs) It seems unanimous. I agree that it’s getting old and I kinda thought Benny was done with it, but then the pigeon emoji came along and gave it new life. BJ: Yes, it is definitely helping the lifespan. I’ve been doing the crown emoji, followed by the pigeon emoji, to let Benny know he is the King Pidge. I’m sure he’ll come up with something new soon once he runs pigeon into the ground, and curlers will catch onto it. JC: You won’t come up with it? BJ: Nah, we aren’t that creative. Though there is a seagull emoji…(laughs) 7. As many people pointed out, at the Skins game, you came in with a new combination of hairstyles. We had previously seen the shaved head, but not with the beard, and now you’re rocking a Yukon Cornelius-type thing. Now, I’ve heard some rumours…how does your wife Shawna feel about the new look? BJ: Listen, John, I’ll say this. At this stage of my life – I have a one year-old daughter, another child on the way – I’m all about trying to eliminate the stresses of my life. Whatever I can do with my hair and beard to be low maintenance, I’m going to do. And let’s be honest, my hairline isn’t getting any better either. (laughs) JC: Yes, we saw you guys play your best at the Olympic Trials with the shaved head, did that factor into the decision to shave it again? 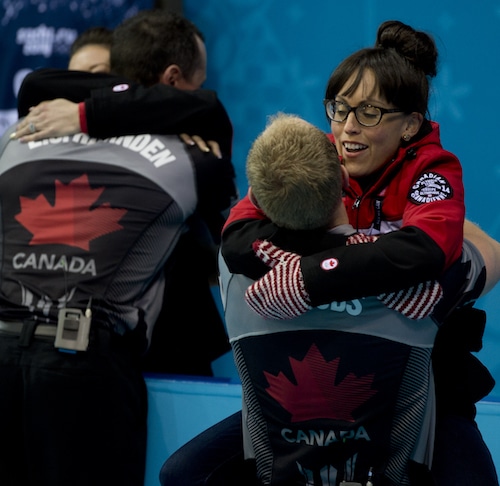 BJ: Well, we finally won a tournament this year (the Skins Game) after I did it, so maybe. And I’ve always wanted to grow a beard but got frustrated when it got to the itchy stage. Having too much on my plate helped me push through that state, and now I like it. JC: But Shawna? BJ: She’s not a fan. I think a lot of women in general aren’t fans either, but they’re going to have to get used to it. (laughs) Let’s put it this way: she didn’t marry me for my looks, or if she did, that was a very small reason why. So thankfully even if she doesn’t love it, I have that to fall back on. 8. And finally, this question comes in from my previous interviewee, Joanne Courtney. If you could change one rule in curling, what would it be and why? BJ: (long pause) I’m trying to think of how to word this. To be honest with you, personally, our team are not fans of some of the sweeping techniques that all the teams have adapted, particularly being able to sweep with a hair broom to make the rock curl. In my opinion, the margin for error has gotten larger, and taken some of the precision out of the game. And I’m not saying we’re not doing it. We are, everyone is, but it’s frustrating. JC: I’ve heard a lot of people obviously talk about directional fabric, or sweeping technique, but you’re the first I’ve heard talk about hair specifically. That actually seemed to be the catch-all at first, “well, at least hair is still good!” Can you elaborate on that? BJ: It’s been an interesting year for curling, and I’m all for banning the technique too. I just think what we’ve seen with hair, how you can make the rocks curl…it’s been discovered. Lots of teams used hair in the past, no one ever complained, but now with what we know about the physics of the rocks and technique, we can use hair to do things we never could before. I honestly think curling is a slightly different game now than it was a year ago, and I’m not a fan of it whatsoever. JC: These are strong words, I thought this was going to be a lighter chat! (laughs) BJ: I just think the game should reward the players who work the hardest, and it’s making players who aren’t as good look better. I hope this offseason, steps are taken to figure out what we can do to get the sport back to where it was, as that’s the game we all fell in love with. JC: Awesome, Brad. Some amazing points there and I agree with you for sure. Can I please have a question for my next interviewee? BJ: Definitely. Can you tell me a little bit about what you do to be a role model for young curlers, and what you do to bring awareness to the sport? JC: Wow. Heavy question, putting someone on the spot here. BJ: I just think more competitive curlers need to get into that side of it. We need to start boosting our community, growing our clubs, and growing the game. I know everyone has jobs, and it can be tough to make time, but as individuals who are getting exposure from the game, I think we are the ones who need to be out helping to boost the game. I’m sure whoever you interview is doing stuff, and I think it’s important to share that with everyone else. 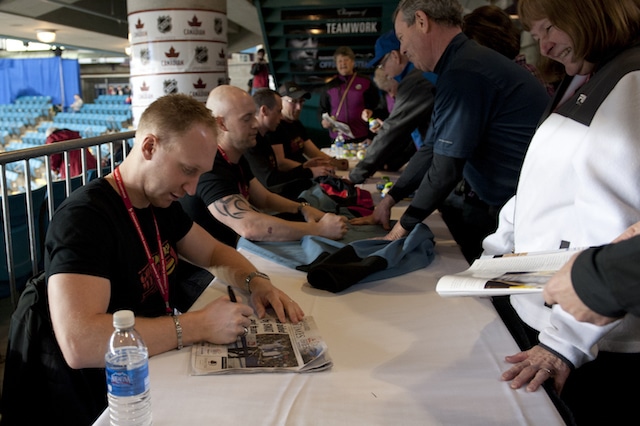 JC: Well that’s a great question, and I’m excited to hear their answer! Thanks so much Brad, and best of luck in Northern Ontario playdowns! Be sure to follow Brad on Twitter @curlercups and as always, you can follow John @cullenthecurler.