Skips with a combined 27 Purple Hearts between them will take to the ice at the 2016 Tim Hortons Brier in Ottawa after winning provincial titles on Sunday. 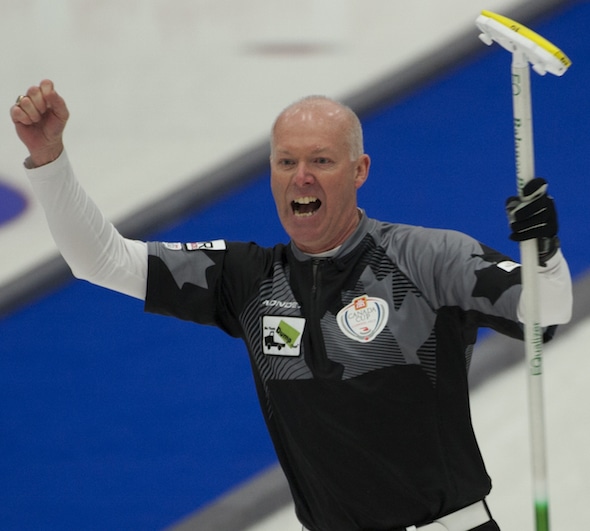 And leading the charge to TD Place in Ottawa will be the home-province team skipped by Glenn Howard, who’ll be making his record 16th appearance at the Canadian men’s curling championship by virtue of a stunning victory in the Recharge With Milk Ontario Tankard final on Sunday in Brantford.

Also nailing down spots in the Tim Hortons Brier were 2015 bronze-medallist Steve Laycock, who won his sixth Saskatchewan crown, and Mike Kennedy, who claimed his fifth New Brunswick championship.

Here’s a look at how things shook down on Sunday, the next-to-last weekend of qualifying for the Tim Hortons Brier.

Ontario — Howard holds the record for most games played at the Tim Hortons Brier, and he’ll pad that total in Ottawa by virtue of his walk-off game-winner against John Epping in the all-Toronto final. Howard made an angle double-raise take-out to score a game-winning deuce in the 10th end for the 6-5 triumph. Howard had to use spare Adam Spencer at the Tankard, replacing Wayne Middaugh, who broke his leg skiing before the provincials. Richard Hart at third and Howard’s son Scott at lead rounded out the team. Howard will be taking aim at his fifth Brier title — one of them in 1993 at TD Place, then known as the Civic Centre.

Saskatchewan — Laycock, the 2003 Canadian and world junior men’s champ, capped a perfect 6-0 run through the SaskTel Tankard at Kindersley with a 6-4 win over Shaun Meachem in an all-Saskatoon final. It was the third straight Saskatchewan championship for the quartet of Laycock, third Kirk Muyres, second Colton Flasch and lead Dallan Muyres.

New Brunswick — Kennedy’s 9-2 triumph over Terry Odishaw in a battle of Moncton teams in the final of the Pepsi Tankard in Rothesay nailed down his fifth Brier Purple Heart. Kennedy also won the 2013 Canadian Senior Men’s title as Wayne Tallon’s vice-skip and went onto win gold at the 2014 World Seniors. Kennedy’s team is rounded out by third Scott Jones, second Marc LeCocq and lead Jamie Brannen.

The field for the 2016 Tim Hortons Brier will be completed this coming weekend as the B.C., Alberta, Manitoba and Northern Ontario championships all begin on Wednesday and conclude on Sunday.