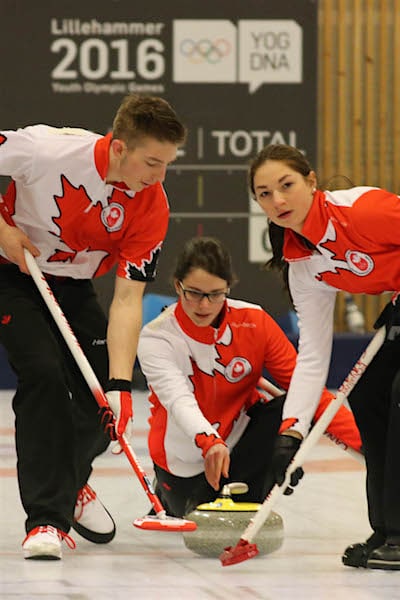 “It was a challenging game, a lot of back and forth, a lot of blank ends,” said Fay afterwards. “Sterling made some great tick shots to set up the (final) end, and Karlee and Tyler made some great peels and great shots to leave us in a position to win.” Leading 2-1 without hammer in the tenth, Fay’s last rock just rubbed the guard, giving Norway a chance to draw for two and the win. But Norwegian skip Michael Mellemseter’s shot went too deep, forcing the extra end. With lots of rocks in play and Canada lying two, Mellemseter came up short on his last rock, giving Canada the 4-2 win – and cementing their position at the top of the standings as the only undefeated team in the competition. Earlier in the day day, Team Canada’s game against Sweden was a nail-biter that saw four blank ends by the Swedes as they tried to gain control. “We were pretty worried before the game because they’re such a great team and so good at keeping rocks in play so we just wanted to keep it close and clean and see what happens at the end,” said Tardi. Trailing 3-2 in the seventh end, Sweden had three rocks in the four-foot and missed an opportunity to remove a Canadian stone, ending up with a single to tie it up – and that was the turning point. With hammer in the final end, Canada peeled off guards and kept things simple, leaving Fay an open hit for two and the win. “Definitely we’re doing great at the defensive side of the game and just waiting for opportunities and misses and capitalizing on them,” said Tardi. “It’s a good feeling to be on top after playing a bunch of great teams, we’re very happy with how it’s going so far.” “It’s a great feeling to know we’ve been able to play well so far in this tournament,” said Fay about Team Canada’s undefeated record.  “But there’s still a lot of important games to come, so we just have to stay focused on one shot at a time.” Action continues on Monday, when Team Canada will face Korea in the afternoon draw (6:30 a.m. EST) and Brazil in the evening draw (1:30 p.m. EST). 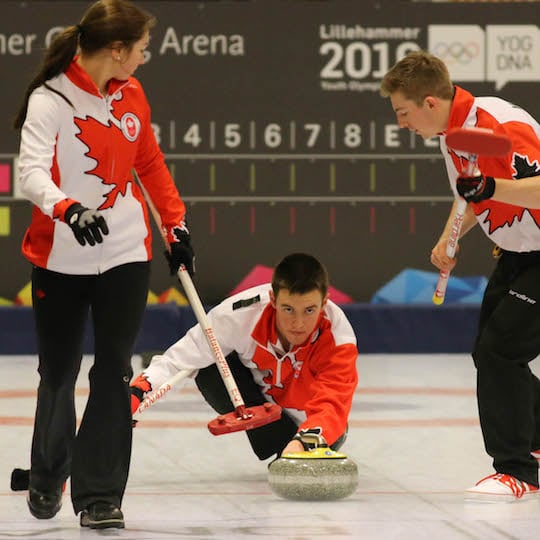 The 16 teams are split into two pools of eight. The top four teams in each pool will qualify for the playoffs, with the quarter-finals and semifinals scheduled for next Tuesday, Feb. 16, and the gold- and bronze-medal games on Wednesday, Feb. 17, at 3 a.m. EST. Live scoring, pictures, team lineups and the event schedule are available at www.worldcurling.org/yog2016 Follow live shot-by-shot action on Curling Geek. Daily highlight packages will be available online at https://www.cbc.ca/sports/olympics/video. Other video content from Lillehammer will be available at the Games’ Youtube channel, www.youtube.com/user/lillehammer2016, as well as at the Youth Olympics’ Youtube channel, www.youtube.com/user/YouthOlympics. For more information about the Youth Olympics, click here.