GRANDE PRAIRIE, Alta. — Jennifer Jones and her teammate Jill Officer will take aim at their record-tying sixth gold medals when the 2016 Scotties Tournament of Hearts gets underway on Saturday in Grande Prairie, Alta. 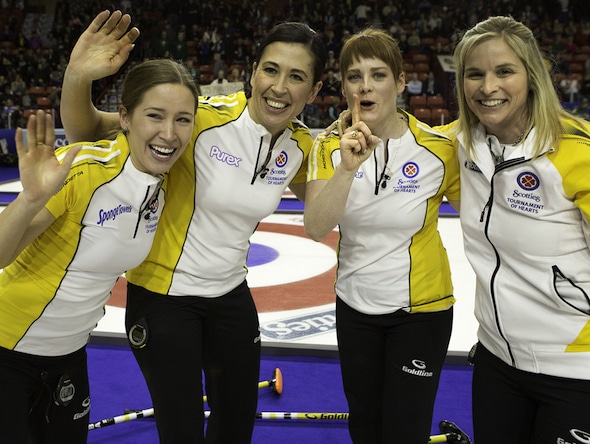 Jennifer Jones, far right, and her team of, from left, Kaitlyn Lawes, Jill Officer and Dawn McEwen are looking for back-to-back titles at the 2016 Scotties Tournament of Hearts. (Photo, Curling Canada/Andrew Klaver)

They would join the legendary Colleen Jones as the only six-time winners of the Canadian women’s curling championship, and they have a chance also to become the first team to put together back-to-back victories on two separate occasions.

Jones, along with third Kaitlyn Lawes, Officer at second, lead Dawn McEwen, alternate Jennifer Clark-Rouire and coach Wendy Morgan, will be in action against the home-province hopeful Chelsea Carey of Calgary when the 2016 Scotties kicks off with the first round-robin draw Saturday at 1:30 p.m. (all times Mountain).

Jones and Officer won their first Scotties together in 2005 at St. John’s. With McEwen added to the lineup, they won three straight, from 2008 through 2010. And then, with Lawes coming aboard, they won last year’s title in Moose Jaw, Sask.

Interestingly, the Jones foursome has history with many of the teams it will be facing in Grande Prairie.

For instance, the team Jones beat in the 2005 final is back in the Scotties for the first time since that stunning loss, which saw Jones make arguably the best walk-off game-winning shot in Canadian championship history, an in-off takeout to score four. Ottawa’s Jenn Hanna upset two-time Scotties champ Rachel Homan in the Ontario final last month.

As well, Carey is a former Winnipegger with whom Jones had countless battles at provincial championships. Carey won bronze at the 2014 Scotties in Montreal wearing Manitoba colours (Jones was representing Canada at the Winter Olympics in Sochi, Russia, that year, winning gold).

Also, Quebec’s Marie-France Larouche (Saint-Romuald) is back at the Scotties for the first time since 2012, when she lost the bronze-medal game to Jones’s Manitoba team. Previously, Larouche lost to Jones in the 2009 semifinal and the 2008 Page playoff 3-4 game.

And one more: this year’s Team Manitoba lead, Kristin MacCuish, is Officer’s niece.

In addition to a Canadian title and the right to represent Canada at the 2016 Ford World Women’s Championship, presented by Meridian Manufacturing, March 19-27 in Swift Current, Sask., this year’s Scotties also has Olympic implications.

Should the Scotties winner win a medal at the Ford Worlds, the team will qualify for the 2017 Tim Hortons Roar of the Rings Canadian Curling Trials in Ottawa — the event that will decide Canada’s four-player teams for the 2018 Winter Olympics in PyeongChang, South Korea.

The Scotties will be preceded by a pre-qualifying round to determine the final entry into the 12-team main draw.

B.C.’s Karla Thompson (Kamloops), the Northwest Territories’ Kerry Galusha (Yellowknife), the Yukon’s Nicole Baldwin (Whitehorse) and Nunavut’s Geneva Chislett (Iqaluit) will play a single round-robin at Revolution Place, with the teams with the two best records advancing to the play-in game, which will be contested Saturday, Feb. 20, at 1:30 p.m., concurrent with the opening draw of the Scotties round-robin.  A tiebreaker, if necessary, would be played Saturday, Feb. 20, at 8 a.m. Admission to the pre-qualifying rounds is free.

The teams in the main draw will play an 11-game round-robin draw that will conclude on Friday, Feb. 26.

The top four teams will make the Page playoff round, which sees the first- and second-place teams playing for a berth in the final, which is scheduled for Sunday, Feb. 28 at 6:30 p.m.. The third- and fourth-place teams will also meet, with the winner moving onto the semifinal on Feb. 27 at 6:30 p.m.. The loser of the three-four game will play the semifinal loser in the bronze-medal game on Feb. 28 at 1:30 p.m.

TSN/RDS2, the official broadcaster of Curling Canada’s Season of Champions, will provide extensive coverage of the 2016 Scotties Tournament of Hearts, with 66 hours of live broadcasts scheduled.

The 2016 Scotties marks the 35th year of Kruger Products Limited’s sponsorship of the Canadian women’s championship.

For ticket information, go to: https://www.curling.ca/2016scotties/tickets/

For schedule information, go to: https://www.curling.ca/2016scotties/draw-schedule/