They went undefeated throughout the round robin, won both quarter-final and semifinal games, and now, Team Canada’s Mary Fay, Tyler Tardi, Karlee Burgess, Sterling Middleton and coach Helen Radford are bringing home gold medals after defeating USA 10-4 in the final of the 2016 Youth Olympics Mixed Team curling event in Lillehammer, Norway, this morning. 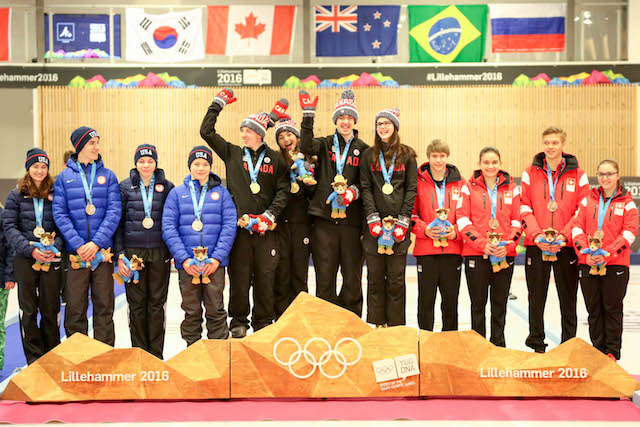 Gold to Canada, Silver to USA, Bronze to Switzerland at the 2016 Youth Olympic Games in Lillehammer, Norway (WCF/Richard Gray photo)

Kicking off the game with a score of five certainly helped. In the opening end, Tardi’s “plan B” line call on Fay’s run-back left Canada with a house full of rocks and a lead that the USA’s Luc Violette just couldn’t overcome. “We knew that we want to take the hammer and we knew that we want an easy two,” said Burgess after the game. “But when we got a five, it was like ‘Wow. Let’s just keep this going.’” Trailing 9-4 in the seventh, USA put up two corner guards, but Canada peeled away every attempt by their opponents to generate offence. In the end, Fay had an open tap-back for one – and the team had a gold medal to celebrate. “Representing Canada at the Youth Olympics, it’s an unbelievable feeling. I don’t know what to say about it, it’s just an incredible feeling,” said Tardi. This Youth Olympics gold medal marks the end of a long year of training for Team Canada skip Fay (Chester, N.S.), third Tardi, (Surrey, B.C.), second Burgess (Brookfield, N.S.), and lead Middleton (Fort St. John, B.C.), who began this journey with coach Radford a year ago. The 2016 Youth Olympics team was determined based on applications from all age-eligible players in Canada, with a special focus on participants in the 2015 Canada Winter Games last February in Prince George, B.C., where Fay and Burgess won silver, representing Nova Scotia, and Tardi and Middleton won bronze as Team B.C. “These are the three best teammates that we could have had,” said Middleton about the Youth Olympics experience. “We worked together, we picked each other up, all on the same level, and we got it done this week.” Fay and Burgess will be back on the international stage in a few weeks – representing Canada at the World Junior Curling Championships in Copenhagen, Denmark. “It’s just hard to believe, it’s hard to wrap your head around the idea that you brought the gold medal home for your country,” Fay said. “I feel so lucky to live in Canada. It’s an amazing place, so many amazing people. It’s so amazing, I can’t really put it into words.” At the first Winter Youth Olympics, in 2012 at Innsbruck, Austria, the Canadian team of Thomas Scoffin, Corryn Brown, Derek Oryniak and Emily Grey captured a bronze medal, behind gold-medallist Switzerland and silver-medallist Italy. 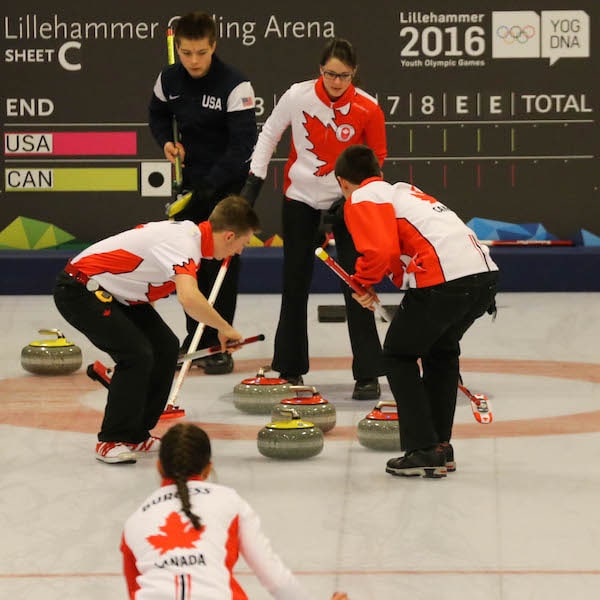 With the team competition concluded, the players will now be split into mixed doubles teams, with players from different countries matched into new combinations, determined by the athletes’ position within their teams and their nations’ overall position following the traditional team competition. The mixed doubles gold- and bronze-medal games will take place on Feb. 21 at  a.m. EST. Live scoring, pictures, team lineups and the event schedule are available at www.worldcurling.org/yog2016 Follow live shot-by-shot action on Curling Geek. Daily highlight packages will be available online at https://www.cbc.ca/sports/olympics/video. Other video content from Lillehammer will be available at the Games’ Youtube channel, www.youtube.com/user/lillehammer2016, as well as at the Youth Olympics’ Youtube channel, www.youtube.com/user/YouthOlympics. For more information about the Youth Olympics, click here.