Jenn Brine is listed as an alternate for Team Nova Scotia at this week’s Scotties Tournament of Hearts but she showed Friday she can match shots with the best curlers here. 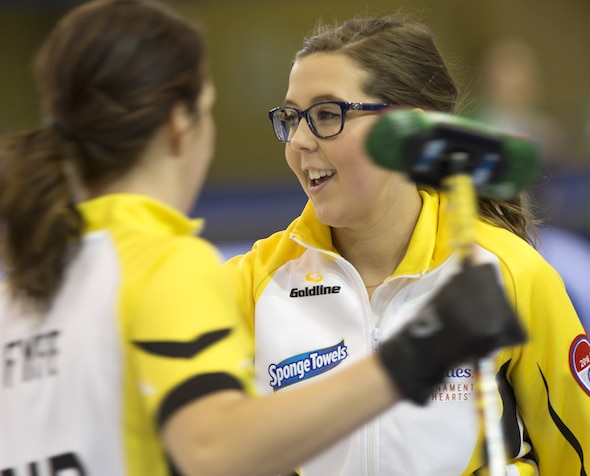 Selena Katz of Team Manitoba is tied for the lead after the first round of the Ford Hot Shots skills competition. (Photo, Curling Canada/Andrew Klaver)

The 27-year-old, who will actually be rotating at second with Blisse Joyce, filled in for ill skip Jill Brothers and was tied with four other veteran front-enders for top spot after the first round of shots in the 2016 Ford Hot Shots skills competition. “Jill wasn’t feeling the best this afternoon so I filled in last minute,” said Brine. Being tied for top spot with two skips and a pair of thirds was, as she said “pretty awesome.” Brine, Olympic champion Jennifer Jones, Quebec skip Marie-France Larouche and thirds Robyn Green of Prince Edward Island and Selena Kaatz of Manitoba were all tied with 24 points. P.E.I. lead Marie Christianson and Nova Scotia third Sarah Murphy had 23 points and Joyce had 22 points.