Karla Thompson of British Columbia edged Kerry Galusha of Northwest Territories 8-6 in an extra end Friday night to send both teams into a one-game playoff for a berth in the 2016 Scotties Tournament of Hearts. 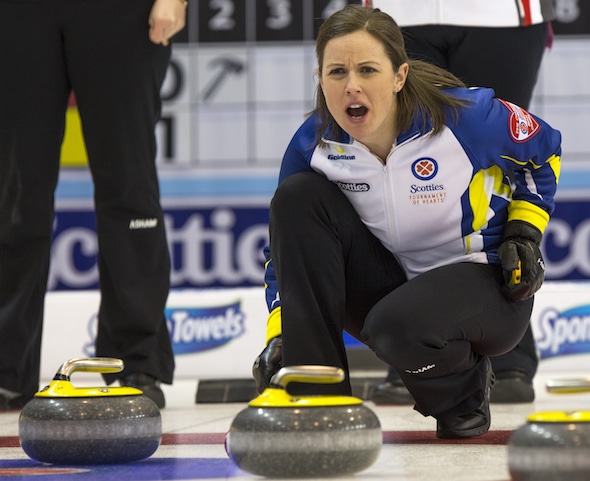 B.C. skip Karla Thompson calls instructions to her sweepers during her team’s crucial win over the Territories on Friday. (Photo, Curling Canada/Andrew Klaver)

Galusha rolled out with her last-rock takeout attempt, leaving Thompson sitting two for the win. “It was probably our best game yet as a team and we’re just gong to build off the momentum of that and go into tomorrow’s game and hopefully it turns out the same,” said Thompson. “We’re starting to settle in a bit and pick up on the ice.” The Territories was up 4-3 after six ends but B.C. grabbed the lead in the eighth. Thompson made back-to-back draws to the four-foot, her final one after Galusha came up light on her last-rock draw attempt, to score three and take a 6-4 lead. 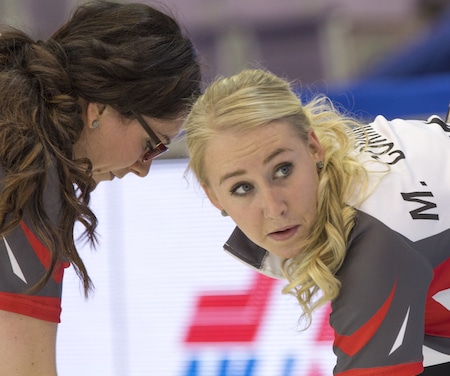 The Territories got one back in the ninth and stole one in the10th to tie. They got the steal when Thompson’s last-rock draw to the four foot was heavy. The win by Thompson and her Kamloops crew of third Kristen Recksiedler, second Tracey Lavery, lead Trysta Vandale, alternate Sasha Carter and coach Gary Van Den Berghe left both teams at 2-1. They’ll meet in the play-in game at 1:30 MT Saturday with the winner then advancing to the main round field of the Scotties. Yukon easily rolled past Nunavut 12-1 in eight ends to leave both those teams at 1-2 and out of the tournament in the other pre-qualifying game. Skip Nicole Baldwin and her Whitehorse crew scored two in the first end and broke the game open in the middle ends thanks to costly misses by Iqaluit Curling Club skip Geneva Chislett. Baldwin scored a single in the fourth for a 3-1 lead and then stole one in the fifth and two in the sixth when Chislett’s last rock of both ends slid right through the house – the first time on a draw and the second on a hit-and-stay. Yukon stole three more each of the seventh and eighth ends and the Nunavut crew shook hands as their territory’s initial foray into the Scotties came to an end. For ticket and other event information, visit https://www.curling.ca/2016scotties/tickets/ For the complete schedule, go to https://www.curling.ca/2016scotties/draw-schedule/ TSN (RDS2 in French), the exclusive television network for Curling Canada’s Season of Champions, will provide complete coverage of the 2016 Scotties Tournament of Hearts. This story will be posted in French as soon as possible at https://www.curling.ca/2016scotties/?lang=fr