A veteran-laden Canadian team will begin its quest for gold on Sunday in Lucerne, Switzerland, when the 2016 World Wheelchair Curling Championship gets underway. 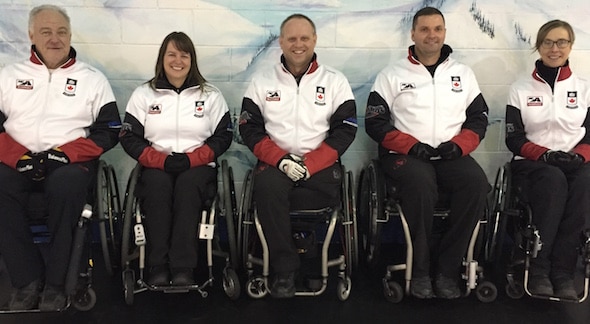 Canada will have the same five players who won gold at the 2014 Winter Paralympic Games in Sochi, Russia, on the ice at Eiszentrum Luzern, with their collective sights set on winning this country’s leading fourth gold medal in the 11th renewal of the Wheelchair Worlds.

Wayne Kiel (Balgonie, Sask.) will be the National Coach in Lucerne, while Joe Rea (Prince George, B.C.) will serve as Team Leader for the Canadians, who enter the 2016 Worlds as the top-ranked wheelchair program in the world.

“This is a team that has proven time and time again that it knows how to win on the international stage when the spotlight is the brightest,” said Gerry Peckham, Director, High Performance for Curling Canada. “We’re extremely confident in the abilities of this team to rise to the occasion and represent Canada with class in Lucerne.”

The Canadian team will face a challenge right off the bat, taking on the home-country favourite Switzerland, skipped by Felix Wagner.

Towards the end of the round-robin draw, Canada will face the 2015 bronze-medal winning Finns, skipped by Markku Karjalainen, on Thursday, followed by a showdown against the reigning world-champion Russians, skipped by two-time world champ Andrey Smirnov, on Friday morning.

The 10 teams will play a round-robin draw that concludes on Friday. Tiebreakers, if necessary, and the Page playoff games will be played on Saturday, with the semifinal, bronze- and gold-medal games on Sunday.

Live scoring, team lineups and the schedule are all available on the event website, www.worldcurling.org/wwhcc2016

Not only are medals on the line in Lucerne, but so are qualifying points to secure a berth in the 2018 Winter Paralympics in PyeongChang, South Korea. The host country is guaranteed one of the spots, so the other 11 countries will qualify based on results of the 2015, 2016 and 2017 Wheelchair Worlds.

Canada finished sixth at the 2015 Worlds in Lohja, Finland. The current qualifying standings can be found here: www.worldcurling.org/pyeongchang-2018-paralympic-winter-games

Canada’s three World Wheelchair Championships were won in 2009 at Vancouver, 2011 at Prague and 2013 in Sochi. Armstrong, Gaudet and Forrest were members of all three teams, as was Rea.