Kerry Galusha needed a pep talk at the end of last season, and John Epping delivered when she needed it most. 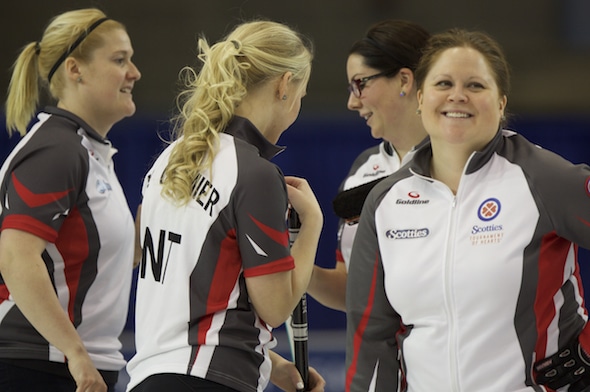 Kerry Galusha, right, and her Territories teammates, from left, Shona Barbour, Megan Cormier and Danielle Derry, are 2-0 in pre-qualifying at the 2016 Scotties. (Photo, Curling Canada/Andrew Klaver)

The veteran skip and her team from Yellowknife fell short last season during the pre-qualifying round of the 2015 Scotties Tournament of Hearts in Moose Jaw, Sask., and she was seriously pondering her competitive curling future.

But a chance meeting with Epping during the Kurl For Kids charity bonspiel in Oakville, Ont., was just the tonic Galusha, third Megan Cormier, second Danielle Derry, lead Shona Barbour and alternate Sharon Cormier needed to gear up for the 2016 Scotties pre-qualifying round at Revolution Place in Grande Prairie, Alta.

With Epping, who reached the Ontario men’s final before losing to Glenn Howard, now on board as the team coach, the Territories are on pace to qualify for the main draw of the 2016 Scotties, improving to 2-0 in pre-qualifying on Friday morning with a 13-2 win over Nunavut’s Geneva Chislett (1-1; Iqaluit).

“I’ve known John since we were at the Canadian mixed in 2007, and we’ve always stayed in touch,” said Galusha. “He gave me a pep talk about the pre-qualifying round and how we should deal with it and come to terms with it, and he thought he could help us. And then in October, we saw him again at a bonspiel and we’ve been working with him ever since on Skype. It’s been amazing. He’s pretty smart when it comes to this game, and he’s brought so much to our team.”

The Territories are assured of a pre-qualifying tiebreaker, and a win later today over B.C.’s Karla Thompson (1-1; Kamloops) would clinch a berth in Saturday’s play-in game. The winner will move into the main round-robin field of the Scotties.

Galusha and Co. scored three-enders in the first, fifth and sixth ends en route to the win, and are feeling confident going into their 4:20 p.m. (all times Mountain) showdown with B.C.

“It’s a different feeling,” said Galusha of her 2016 experience compared to last year. “I’m actually excited to be here — we have a whole new attitude, we’re excited and feel privileged to be here and playing in this. And John makes us a stronger team.”

In the other pre-qualifying game Friday morning B.C. rebounded from its surprising Thursday night loss to Nunavut with an 8-4 win over Nicole Baldwin of the Yukon (0-2; Whitehorse).

The two best records from the pre-qualifying round will advance to Saturday’s play-in game. A tiebreaker, if necessary, will be played on Saturday morning.

For ticket and other event information, visit https://www.curling.ca/2016scotties/tickets/

For the complete schedule, go to https://www.curling.ca/2016scotties/draw-schedule/

TSN (RDS2 in French), the exclusive television network for Curling Canada’s Season of Champions, will provide complete coverage of the 2016 Scotties Tournament of Hearts.

This story will be posted in French as soon as possible at https://www.curling.ca/2016scotties/?lang=fr