Chelsea Carey made her Scotties Tournament of Hearts debut as an Alberta skip a successful one Saturday with a stunning 12-5 nine-end win over Team Canada’s Jennifer Jones. Carey and her Calgary crew of third Amy Nixon, second Jocelyn Peterman, lead Laine Peters, alternate Susan O’Connor and coach Charley Thomas stole four in the third end and then put an exclamation point on their win with five in the ninth. In other games in the tournament’s opening draw, Jolene Campbell of Saskatchewan (Regina) scored five in the fourth end and four in the seventh to roll past Nova Scotia (Halifax), skipped by third Sarah Murphy in place of the still-ill Jill Brothers, and Marie-France Larouche of Quebec (St. Romuald) knocked off Jenn Hanna of Ontario (Ottawa) 9-5. “We sort of came in saying even if you lose it’s not that big a deal,” Carey said of her victory. “What we wanted to get out of today was figuring out the ice and feeling like we’re communicating well. “Everyone played really well. We had a couple of little miscues but the girls made it pretty easy on me for the most part. Winning is a great bonus.” Jones and her veteran Winnipeg team of third Kaitlyn Lawes, second Jill Officer, lead Dawn McEwen, alternate Jennifer Clark-Rouire and coach Wendy Morgan weren’t upset by the loss “If you’re going to give up a steal of four, the first game is the one to do it in,” she said. “I thought we played well in the second half of the game so there’s lots of positives to take out of it.” Saying it was “kind of a kick in the butt,” Jones added it was “not the way you want to start … but I’m happy with the way we finished.” Jones, who was nearly perfect in winning the morning’s Ford Hot Shots final, was off a hair in Game 1 and it cost her big in the third end. Her first rock left Carey the opportunity to throw up a centre guard, forcing Jones to try a wide hit and roll against five Alberta counters. The hit and roll was the one shot Jones didn’t hit perfectly in the Hot Shots and she was narrow on this one, rolling through the house and letting Alberta steal four. “It was a new path and it just curled a little more,” she said of the shot. “I probably underthrew my second one a bit. End of the day we just missed by quarter of an inch each time so it wasn’t that bad. It just worked out really bad on the scoreboard.” 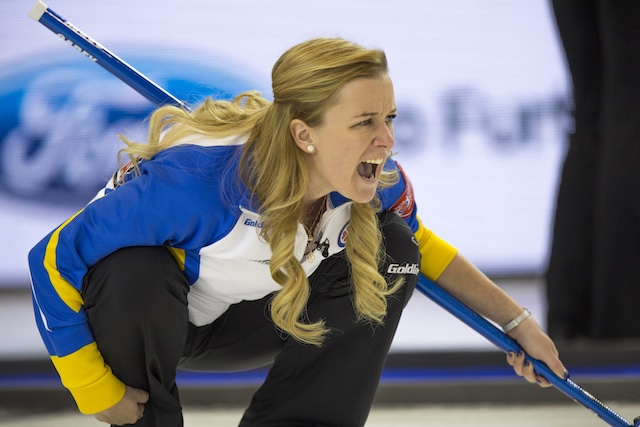