Karla Thompson of British Columbia scored three in the fifth end and then held off veteran Kerry Galusha of the Northwest Territories 8-5 Saturday to win the pre-qualifying final and earn a berth in this year’s Scotties Tournament of Hearts. 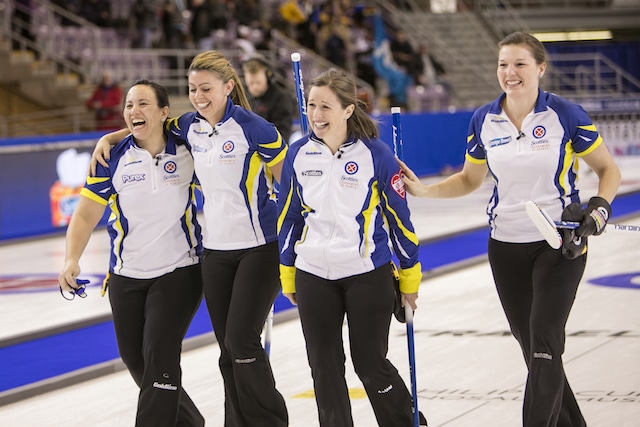 “It feels amazing right now, I’m not going to lie,” Thompson said after she and her Kamloops team of third Kristen Recksiedler, second Tracey Lavery, lead Trysta Vandale, alternate Sasha Carter and coach Gary Van Den Berghe had finished celebrating their win. “I don’t know if it felt better to win B.C. or that game so we’re on a high right now.” While six other teams were playing their first games in the main round robin, knowing it was just Game 1 and they had another six days of curling, B.C. and the Territories knew it was win or go home. And they played it tight, blanking the first and fourth ends and trading singles in the second and third. It wasn’t until the fifth end that either team showed a crack. Thompson’s crew managed to hide two counters behind guards and Galusha’s last rock raise was inches wide, bumping a B.C. rock to second counter. Thompson drew inside the four foot to count three. “The end was looking really great, set up nice,” said Thompson. “I remember Kerry had an unfortunate (shot), didn’t quite curl enough and we just capitalized, made the draw at the end.” Galusha’s Yellowknife team came right back with two in the sixth, an open draw after Thompson missed on her angle raise takeout attempt left the Territories sitting one. The Territories pulled even at 5-5 with more in the eighth but B.C. countered with a pair in nine and one more in the 10th. “We’ve got a good handle on the ice and we got rid of some nerves. Hopefully that continues,” Thompson said of having already played four games before even getting into the main tournament. “We just came out looking to figure out the ice and get comfortable in the arena and that’s what we’ve done.” B.C. will now play its first game in the main round against Manitoba in tonight’s 6:30 p.m. MT draw. For ticket and other event information, visit https://www.curling.ca/2016scotties/tickets/ For the complete schedule, go to https://www.curling.ca/2016scotties/draw-schedule/ This story will be posted in French as soon as possible at https://www.curling.ca/2015canadacup/?lang=fr TSN (RDS2 in French), the exclusive television network for Curling Canada’s Season of Champions, will provide complete coverage of the 2016 Scotties Tournament of Hearts.