Team Canada came close, but gave up a steal in the final end to lose 9-6 to the USA’s Patrick McDonald on Monday afternoon at the 2016 World Wheelchair Curling Championship in Lucerne, Switzerland. Skip Jim Armstrong, third Ina Forrest, second Dennis Thiessen, lead Mark Ideson, alternate Sonja Gaudet and coach Wayne Kiel gave up a couple of steals to start, but answered back with three points in the third to go ahead. Trailing after six ends, Canada surrendered another steal to go behind 8-6. McDonald stole another point in the final end to hand Canada its second loss of the round robin. 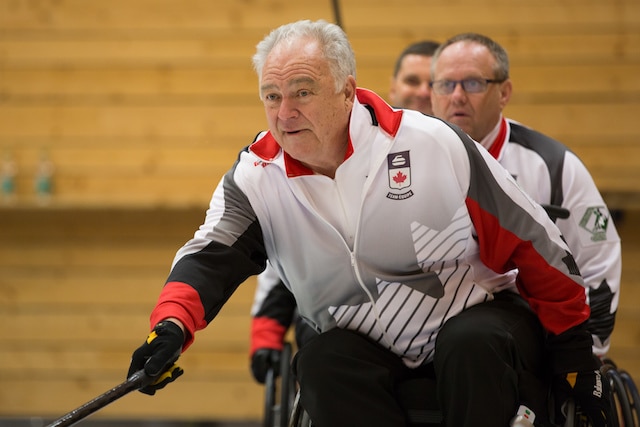 In other games on Monday afternoon, it was Norway over China 11-5, Korea over Finland 11-1, and Slovakia over Russia 8-5. With a 0-2 record, Canada is tied with Finland and Germany in the standings, while Norway and Switzerland remain undefeated at the top, followed by Russia, China, Korea, Slovakia and the United States. The round robin continues on Tuesday, when Canada faces China at 12:30 a.m. EST, and Korea at 5:30 a.m. EST. Live scoring, team lineups and the schedule are all available on the event website, www.worldcurling.org/wwhcc2016.