Still looking for a win at World Wheelchair Championship

Team Canada continues to look for its first win at the 2016 World Wheelchair Curling Championship after falling to China and Korea on Tuesday in Lucerne, Switzerland. 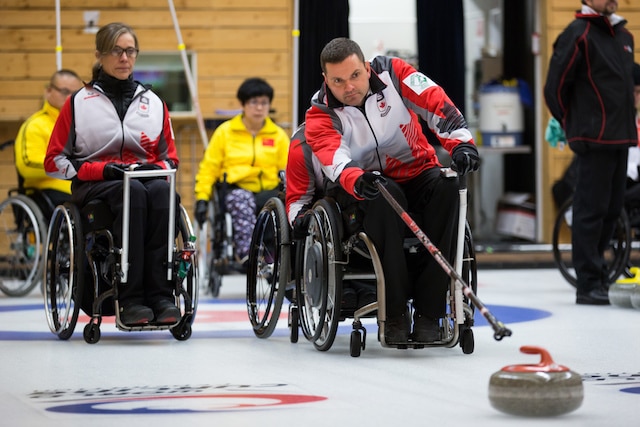 In the morning game against China’s Yulong Sun (2-2), skip Jim Armstrong, third Ina Forrest, second Dennis Thiessen, lead Mark Ideson, alternate Sonja Gaudet and coach Wayne Kiel trailed 7-5 after five ends and fought back with a couple of steals, but came up short in an 8-7 loss. “I feel like we’re trying to find our groove and we let a close one slip away there,” said Ideson. “But we’ve got six games left and I know we have a streak in us. We’re going to have to dig deep and finish strong.” Canada kept it close in the afternoon game against Korea’s Hui-Tae Yang (3-1), but gave up a steal in the seventh to fall behind 7-3 and weren’t able to climb back. “We’re going to stick to our game plan,” said Ideson. “We’ve had a few shots that we’d like back and we really just have to go out and focus on what we can control and the rest will look after itself.” With a 0-4 record, Canada is tied with Finland in the standings, while Norway and Switzerland remain undefeated at the top, followed by Korea, Russia, China, the United States and Germany. The round robin continues on Wednesday, when Canada faces Slovakia (1-3) at 5:30 a.m. EST. The 10 teams will play a round-robin draw that concludes on Friday. Tiebreakers, if necessary, and the Page playoff games will be played on Saturday, with the semifinal, bronze- and gold-medal games on Sunday. Live scoring, team lineups and the schedule are all available on the event website, www.worldcurling.org/wwhcc2016.