Team Canada ended a three-game winless streak and stole three ends on the way to a 9-3 defeat of Slovakia at the 2016 World Wheelchair Curling Championship on Wednesday afternoon in Lucerne, Switzerland. 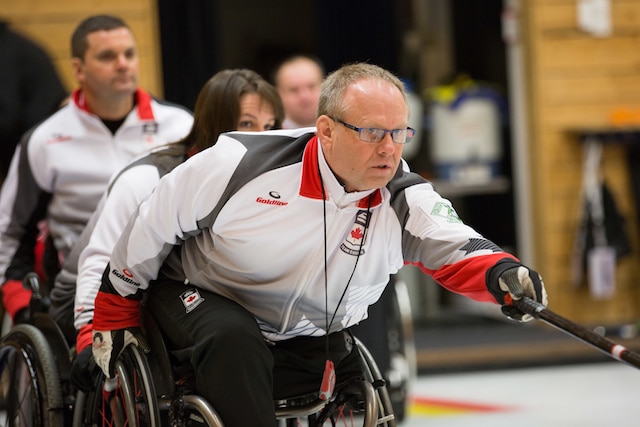 Skip Jim Armstrong, third Ina Forrest, second Dennis Thiessen, lead Mark Ideson, alternate Sonja Gaudet and coach Wayne Kiel started strong, forcing Slovakia’s Radoslav Duris to a single in the first end, then going on to score in the next four ends. In the seventh, Canada scored four to put the game away. “It’s so nice to get that monkey off our back,” said Armstrong. “We’re not used to losing, we’re certainly not used to stringing them together but we’ve been struggling, there’s no question about that. Really the only difference today was we got a break early and got a two- or three-point lead. Those conditions are tough to come back from and that’s where we found ourselves the first half of the week and hopefully that’s the way we’ll turn it around the last half.” With the win, Canada creeps closer to qualifying for the playoff round. After today’s games, they sit tied in eighth spot with Germany. Norway and Switzerland remain undefeated at the top of the standings. “Four games left, but who’s counting,” Armstrong said. “We think all we need now is a string of another seven or eight in a row and we’re back where we started.” Canada is ranked first in the world in Wheelchair Curling, so the slow start at this world championship has been disappointing to the team. “As I say we’re not used to losing and we’ve been pretty fortunate over the last few years,” said the skip reigning Paralympic champions. “To struggle, we’re just not used to struggling either so it’s been a new experience for the team. What we’re seeing is that we’ve got the fortitude to hang in there and grind. Tomorrow’s a new day so we’ll see but I wouldn’t count us out yet.” The round robin continues on Thursday, when Canada faces Finland (0-6) at 7:30 a.m. EST. The 10 teams will play a round-robin draw that concludes on Friday. Tiebreakers, if necessary, and the Page playoff games will be played on Saturday, with the semifinal, bronze- and gold-medal games on Sunday. Live scoring, team line-ups and the schedule are all available on the event website, www.worldcurling.org/wwhcc2016.