When was the last time you watched a sequel that matched the first movie for entertainment? When it doesn’t live up to your ideal of the first movie, does it take something away the opening act? 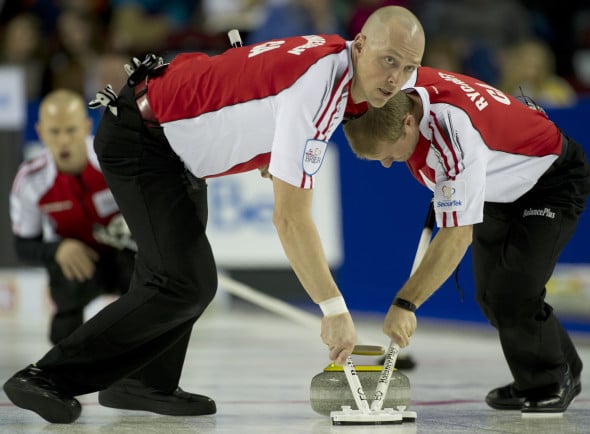 For every Godfather II, there seems to be 10 Dumb and Dumber 2’s, or The Hangover Part 2; movies that are critically destroyed. Even remakes, where Hollywood studios devoid of new ideas decide to remake an old classic, often fail in terrible fashion (case in point this year’s debacle of a remake of the early ’90s classic Point Break. Don’t try to recreate Swayze and Keanu in their primes).

That would seem to be the dilemma for me and my fellow Team Canada members for this year’s Tim Hortons Brier in Ottawa. What do we do for a sequel? How do we match the story that unfolded last year in Calgary?

The truth is, and the way that we have to look at this event, is that trying to rewrite or rekindle the 2015 Tim Hortons Brier story is the wrong approach to take if we want to find success in Ottawa.

2015, as magical as it was, is gone, and we have a whole new event upon us, where we will find a new set of challenges and hurdles to overcome. We will have to find new ways to persevere and jump over those new hurdles if we want to once again defend our title.

Thinking that we should take the slow build approach and get off to a 2-3 start then proceed to climb our way out of the depths is a recipe for us to not see the championship weekend, let alone the world championship in Switzerland.

Our team is taking some of the systems and ideas that we had in place last year and bringing them to this year for our preparation. We have been ramping up our practice schedules and have a strong week of training camp (both together and on our own) planned for the lead up to the Tim Hortons Brier.

Every day from about two weeks out has been planned so that we can be as well prepared as we can be for 2:30 p.m. March 5, when we open up our championship against Team Quebec at the TD Centre in Ottawa.

To say that the competition at the 2016 Tim Hortons Brier is “tough” is likely an understatement. All I know is that of the 11 teams currently in the main draw (44 total players), a whopping 70 per cent of them (31) have played in a Brier playoff game, and 36 per cent (16) already have their name on the trophy. 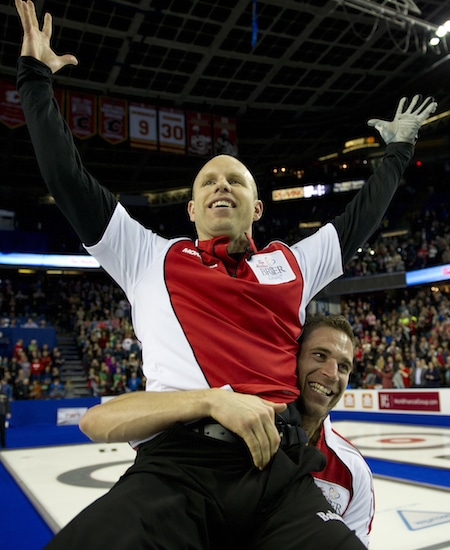 Pat Simmons is hoisted by teammate John Morris after winning the Tim Hortons Brier a year ago in Calgary. (Photo, Curling Canada/Michael Burns)

These numbers include Manitoba sending a Tim Hortons Brier “rookie” team that has been ranked No. 1 in the world for much of the past four seasons — hardly the resume of a team that will be deer in the headlights.

Did you ever watch American Gladiators in the early ’90s, and saw “The Gauntlet,” in which five giant Gladiators sat in a half-pipe chute and beat the tar of out the contestants with blocking pads, elbows and anything else they could find to hinder their progress? That’s probably what each team will feel like during the 2016 Tim Hortons Brier. Each night, you’ll settle into your hotel room and check out your next-day schedule and think, “well, that seems like a really hard day. Except, that’s how they’re all going to be.

With this ever-increasing talent level, it brings up an interesting question. What is the next secret to success? Teams are so good and make so many difficult shots in today’s game, that it creates an interesting quandary as to what might be the next aspect that a team can do to differentiate themselves.

It’s well documented that the best curlers train physically and mentally harder than ever now, a totally professional approach. Teams are provided extra opportunities for TV exposure and the ability to compete in high-pressure situations. Some of these factors used to be what differentiated teams from their competition, but when EVERYONE is doing them, what’s next?

Undoubtedly, the “year of sweeping” has shown that teams are always looking for that edge. With the limitations on products that can be used, which our governing bodies have thankfully been quick to act upon in collaboration with the players, there will be limitations to the effectiveness of our sweeping in Ottawa, but don’t fool yourself that the phenomenon is over.

The genie seems to be out of the bottle for now and the team that finds a way to manage the rocks the best is going to have an advantage in Ottawa. Yes, the thrower is going to be more in play than ever this week — we shouldn’t be able to “joystick” or “Nintendo” rocks down the ice, but being able to save a tight throw based on your attack to sweeping is key.

Sweeping may change again this summer but for now we know the lay of the land and have to find the best way to use it to win games.

But what’s next? Will the team that wins in Ottawa have found new strategic formulas to approach the on-ice chess game? Is the team that decides to take it old school and shut down the Patch every night going to win? (Likely not, but someone can try). Maybe we’ve reached the apex of professionalism and it will strictly come down to shot-making and luck?

Whatever happens in Ottawa I know this for a fact: the team that wins is going to have to have played great all week long and received a few fortuitous breaks along the way to become champion.

No matter how it unfolds, what you are going to see as curling fans, either in the arena or on TSN, is a bunch of Canada’s best curlers competing their tails off to represent our country at the World Championship. Does it get any better than that?

(Nolan Thiessen, lead for Team Canada, is aiming for his third straight Canadian men’s curling championship, and the fourth of his career, when the 2016 Tim Hortons Brier kicks off Saturday at TD Place in Ottawa. For ticket information, go to: www.curling.ca/2016brier/tickets/)