A field many consider to be the finest ever assembled to contest a Canadian men’s curling championship will open play Saturday at TD Place in Ottawa in the 2016 Tim Hortons Brier. 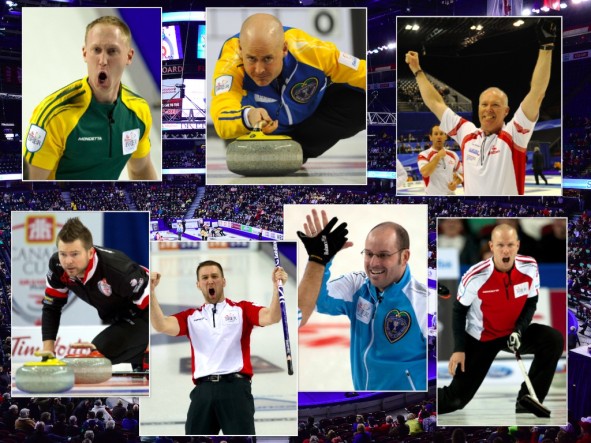 Curling’s biggest names will be at the 2016 Tim Hortons Brier in Ottawa. (Photos, Curling Canada/Michael Burns)

There will be a collective 16 previous Brier winners (with 30 titles in total), 13 former world champions, nine Olympic gold-medallists and a stunning 304 Tim Hortons Brier Purple Hearts on display in the world’s most famous curling championship, which will celebrate its 87th edition in the nation’s capital.

Leading the pack will be the two-time defending champion Pat Simmons team from Calgary, which claimed gold at last year’s Tim Hortons Brier in Calgary before winning bronze at the Ford World Men’s Championship in Halifax.

But the reigning champs — Simmons, vice-skip John Morris, second Carter Rycroft, lead Nolan Thiessen, alternate Tom Sallows and coach Earle Morris will be adorned in Team Canada colours — will be pushed extremely hard in its bid for a three-peat (for Simmons, Rycroft and Thiessen; Morris joined the team last season).

But some of the Tim Hortons Brier rookies are just as impressive. After years of frustration in his attempts to win a Tim Hortons Brier Purple Heart, Manitoba’s Mike McEwen finally broke through to win his first provincial title. His Winnipeg team has been dominant on the World Curling Tour in the past few seasons, and currently sits third on the Canadian Team Ranking System, behind Gushue and Koe.

Another group of rookies will not only be making their Tim Hortons Brier debuts, they’ll also be giving home territory, Nunavut, its first-ever representation at the Canadian men’s championship, as Wade Kingdon’s team from Iqaluit will participate in the pre-qualifying competition beginning on Thursday.

As part of the Tim Hortons Brier week celebration, the Canadian Curling Hall of Fame will hold its induction ceremony on Wednesday, March 9, during a banquet at the Westin Ottawa. Tickets are available at www.eventbrite.ca/e/2016-curling-canada-hall-of-fame-and-awards-night-tickets-20929081446

It’ll be the first time the Canadian men’s curling championship has been played in the nation’s capital since 2001, when Alberta’s Randy Ferbey prevailed in the same building (then known as the Ottawa Civic Centre).

The Tim Hortons Brier will be preceded by a pre-qualifying round to determine the final entry into the 12-team main draw.

The four teams will play a single round-robin beginning Thursday at TD Place, with the teams with the two best records advancing to the play-in game, which will be contested Saturday, March 5, at 2:30 p.m., concurrent with the opening draw of the Tim Hortons Brier main round-robin. Admission to the pre-qualifying rounds is free.

TSN/RDS2, the official broadcast partner of Curling Canada’s Season of Champions, will provide complete coverage of the Tim Hortons Brier, leading to the gold-medal game on March 13.

The winner of the 2016 Tim Hortons Brier will represent Canada at the World Men’s Championship, April 2-10 in Basel, Switzerland, in addition to qualifying for the 2016 Home Hardware Canada Cup in Brandon, Man., the 2017 World Financial Group Continental Cup in Las Vegas and the 2017 Tim Hortons Brier in St. John’s.

Additionally, should the Tim Hortons Brier champs finish on the medal podium at the world championship in Switzerland, they’ll earn a return trip to Ottawa for the 2017 Tim Hortons Roar of the Rings Canadian Curling Trials — the event that will determine Canada’s four-player teams for the 2018 Winter Olympics in PyeongChang, South Korea.

For ticket information, go to www.curling.ca/2016brier/tickets/.

It will be the fourth time the Canadian men’s curling championship has been staged in Ottawa. In 1979, Manitoba’s Barry Fry prevailed. The 1993 Brier was captured by Ontario’s Russ Howard, while Ferbey’s triumph in 2001 started his amazing run of winning four Canadian men’s titles in five years.

In total, Ontario has played host to the Brier 30 times prior to this year, the most of any Canadian province.

The Brier has been played in 31 cities across Canada, from Victoria to St. John’s. Manitoba has won a leading 27 Briers, while Alberta is just behind with 26 victories. New Brunswick, Prince Edward Island, the Yukon, Northwest Territories and Nunavut have yet to win.