Canada will take aim at history when the 2016 VoIP Defender World Junior Curling Championships get underway Sunday at the Taarnby Curling Club, just outside of Copenhagen, Denmark. 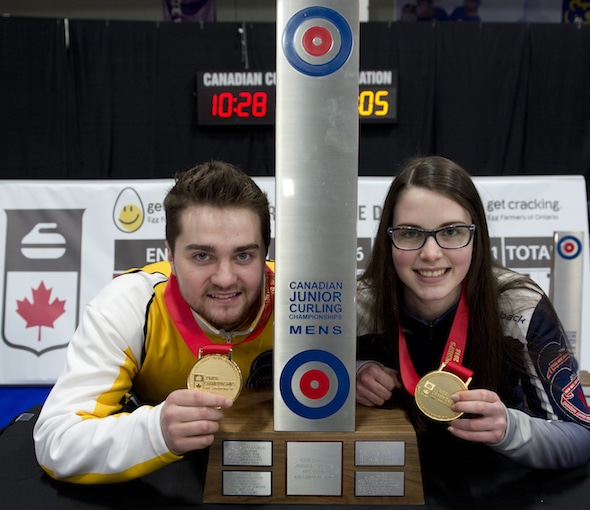 Canada is coming off a gold-medal sweep of the 2015 World Juniors in Tallinn, Estonia, where teams skipped by Winnipeg’s Braden Calvert and Edmonton’s Kelsey Rocque won world championships.

Since the introduction of the world junior women’s championship in 1988 (the men’s junior worlds date back to 1975), only seven countries have managed to sweep the men’s and women’s gold in the same year. And, none of them was able to repeat the feat the following season — the task now facing the 2016 Canadian teams.

But both Canadian entries have championship pedigree going for them as they prepare to open play Sunday.

On the men’s side, Winnipeg’s Matt Dunstone is going to his third world junior championship; he won a bronze medal in 2013 in Sochi, Russia, and was an alternate for fellow Manitoban Braden Calvert a year later. He also has international experience skipping Canada at the 2015 Winter Universiade in Spain, where he finished fifth.

Meanwhile, half of the Canadian women’s team from Chester, N.S., that will compete in Denmark already has struck gold this season.

Skip Mary Fay and second Karlee Burgess were members of the four-player mixed team that steamrolled to the gold medal at the Winter Youth Olympic Games last month in Lillehammer, Norway, along with B.C.-based teammates third Tyler Tardi and lead Sterling Middleton.

Interestingly, Daniels was the skip of the B.C. team that Day defeated in the gold-medal game at the 2016 Canadian Juniors, presented by Egg Farmers of Ontario.

The Canadian teams will be in the 10-team (of each gender) round-robin draw that leads to the four-team Page playoffs, beginning Saturday, March 12.

On the men’s side, Dunstone will face a stiff challenge from a veteran-laden Swiss team skipped by Yannick Schwaller, who won gold in 2014 and lost to Calvert in last year’s gold-medal game. Also returning is 2015 bronze-medallist Bruce Mouat of Scotland, in addition to U.S. veteran Korey Dropkin, who’s in his fourth World Juniors.

There is less experience on the women’s side, including Canada’s all-rookie team. The Scots, skipped by first-timer Sophie Jackson, have two members returning from last year’s silver-medal team, Naomi Brown and Rachel Hannen (who’ll be the alternate for Eve Muirhead’s Scottish team at the 2016 Ford World Women’s Curling Championship, presented by Meridian Manufacturing, March 19-27 in Swift Current, Sask.).

The most experienced team will be the U.S. squad helmed by Cory Christensen, who’s appearing in her fifth World Juniors.

Turkey is appearing at the World Juniors for the first time; this event was originally scheduled to be hosted by Turkey, but the event was moved in late January due to concerns over player safety.

Event information, including news and live scoring, are available at the event website, www.worldcurling.org/wjcc2016

As well, games will be streamed live on the World Curling Federation’s Youtube channel, www.youtube.com/WorldCurlingTV

Here’s a look at Canada’s round-robin schedule, along with information on Canadian games that will be streamed live (all times ET):