This week, John sits down with Matt Dunstone, the 2013 and 2016 Manitoba and Canadian Junior Champion skip who caused quite a stir in the curling world by also making the Manitoba Men’s final two weeks later, knocking off Reid Carruthers before dropping the final to Mike McEwen. Matt will head to Taarnby, Denmark, in hopes of improving on his bronze medal from 2013. Welcome to Magical Question Fun Time, the new Curling Canada feature where comedian John Cullen sits down with your favourite curlers for interviews like you have never seen. Each interview will feature eight questions: five standard questions that will be asked to each curler, two questions specific to that curler, and one question that the curler interviewed before them asks. 1. What’s the nicest shot you’ve ever been a part of? Matt Dunstone: I think it was probably three years ago in the Ottawa Junior Spiel… John Cullen: Wait, wait. It wasn’t one of two phenomenal shots in the Canadian Junior Final? Or that sick shot in the Manitoba Men’s? MD: Well, those were good shots, but this one just sticks out for some reason. We were actually playing my current second, Kyle Doering, in the semi-finals there. This shot might’ve been what convinced him to play with me, actually. (laughs) I had a draw to the pin to tie it up, but I chose to play a runback instead. It was stupid, but it worked out. It was a double run on a guard that was just over the hogline onto a rock that was just in the top 12-foot. I had to hit the one just over the hogline at a slight angle too, and stuffed it on the button. JC: It sounds insane, I wish we had video. I mean, you also drew the lid to win your first Manitoba Junior title too, if I recall. MD: Yeah, that’s probably the only highlight-reel draw you’ll see out of me. (laughs) Draws to the eight-foot for me are normally a stretch. As you say though, I’ve been lucky to be a part of some big shots early in my career and they’re always a ton of fun to play, even if sometimes they’re stupid. (laughs) 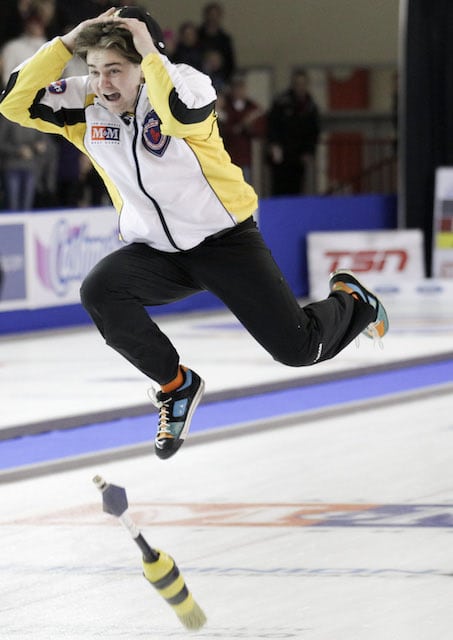 2. Who could you take in a fight? MD: I know the common answer is Colin Hodgson, but he does a lot for me, so I won’t say him. I think I could beat up anyone on my own team without question. The three of them weigh about 300 lbs. combined. JC: (laughs) A few people have said their own team, but never all three of them. You think you could take them all at the same time? MD: I think 10 year-old Jamboree kids could take them three-on-one. (laughs) And Erin Pincott, too. I went to Worlds with her in 2013 and she’s tough. I’d say she could take all three of them easy. I think a good match for me would be Reid Carruthers. He’s a veteran, but I think I could hit him in some of his soft spots and get him vulnerable. On a good night, I think I could take him. 3. If a deli named a sandwich after you, what would be on it? MD: A ton of cheese. I often go with cream cheese, feta cheese and cheddar cheese on my sandwiches. JC: Oh my god. MD: I get them all on there. Man, it’s delicious. I’d do that, and then a thin steak, wrapped in bacon, on a marble rye. JC: I can tell you’re 20 years old. If I ate this, I would die. (laughs) MD: (laughs) Oh, my stomach always tries telling me it’s a horrible idea afterwards, but at the time, it tastes damn good. And I would call it the Sh*t Disturber, for obvious reasons, both personal and physical. 4. What’s the worst job you’ve ever had? MD: I don’t know about worst job, but my worst decision was going to university. (laughs) If university is considered a job, that was the worst for sure. JC: (laughs) What was so bad about it? MD: I just had no idea what I wanted to do and school wasn’t my favorite thing anyway, so it added up to a bad situation for me. I was just taking classes and staring off into space. Let’s just say I won’t be going back anytime soon. As for an actual job, I was an icemaker at a few clubs when I was younger. JC: Lots of curlers are icemakers, I’m surprised you’d say that was terrible. MD: Oh, the job wasn’t terrible and it was great for being able to throw rocks whenever I wanted, but what a lot of people don’t realize is being an icemaker also means doing janitorial duties, which are…less than fun. Let’s just say I’m not sure there’s a worse clean-up than the men’s washroom after Saturday Morning Men’s League. JC: (laughs) I can only imagine. MD: I don’t even want to know what happened on their Fridays. (laughs) 5. What’s a stupid thing you incorrectly believed was true for a long time? MD: Wow, great question. I’m not sure I can say this without it coming out the wrong way, but the only thing I can think of was that Mike McEwen was unbeatable. Does that sound bad? (laughs) JC: (laughs) I think we’ve all seen Mike play and felt that. MD: Exactly, I don’t mean it disrespectfully and obviously he beat us twice in the Manitoba Men’s Provincials, including the final, but I think growing up in Manitoba, you’d just see him winning ALL the time, and you think, especially as a younger curler, “man, he’s unbeatable, we would never beat him.” Then the Morris spiel came along and we beat him twice, including to get in the playoffs, and you think “wow, okay. I guess maybe I shouldn’t have believed that.” JC: I don’t think that’s disrespectful, I think that’s a common feeling among athletes, to feel that beating the top teams is difficult—and it is. MD: Exactly. There was definitely a time where I said, “I don’t think I’ll ever beat him.” It was probably right before we played them for the first time in Morris. (laughs) 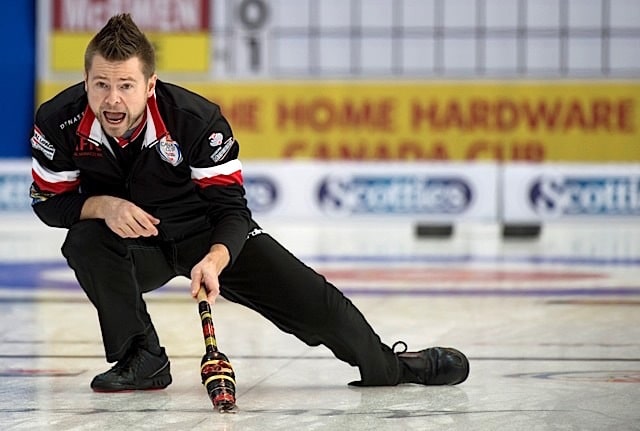 “The only thing I can think of was that Mike McEwen was unbeatable. Does that sound bad?” (Curling Canada/ michael burns photo)

6. Alright, now we are on to the Matt Dunstone-specific questions. I normally try to dig up dirt on the people I interview, and this case, it was literally dirt. Which farm animal would you say is your least favorite? MD: (laughs) Weird question. Either a sheep or a pig. JC: Really? I heard it was a sheep for sure… MD: Well, I was attacked by one if that’s what you’re driving at. (laughs) It was a traumatizing experience, I still can’t be around sheep to this day. I was out in the field chasing some chickens when I was about 7. I guess I got a wee bit close to a mama sheep and she didn’t enjoy that too much. She charged me and put me right on my butt in a pile of mud. 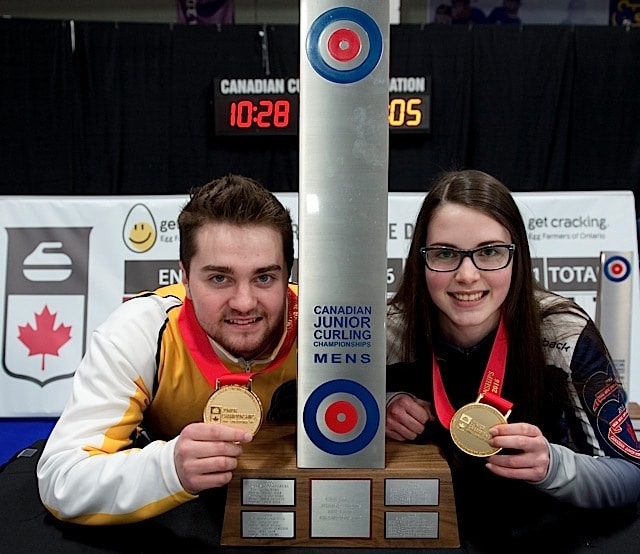 JC: This is the most Prairie my interviews have ever been. (laughs) MD: (laughs) Yeah, it was tough. I don’t like pigs, either. They’re scary. But if I had to choose, I wouldn’t want to be locked in a room with a sheep. (laughs) I think if I went to a petting zoo, I could probably pet one, but if I’m just solo with a sheep and no supervision…I don’t even know what would happen. JC: I think I’m gonna set this up. Matt Dunstone vs. A Sheep. Should be a good tilt. Better than you and Reid, even. MD: Could you set that up for me? (laughs) It might be time to conquer my fears. 7. If someone told you that you had to have your eyeball touched for 10 straight minutes or else you had to trade in your Canadian gold medal, which do you choose? MD: (laughs) Wow, this is a deep dig here, Cullen. I know exactly who gave you this info, too, and this is real tough. I can’t even touch my own eyes, let alone have someone else touch them. I don’t even like touching my eyes when they’re closed. Man…did you say 10 minutes? Son of a b. Okay, medal’s gone. I can’t do it. JC: (laughs) Seriously? MD: Seriously, I can’t. If you said maybe 30 seconds, okay, but 10 minutes? I’m out, man. Maybe when the sheep hit me something happened, but these eyes are as sensitive as it gets. They’re honest-to-God cramping right now just because we are talking about this. (laughs) JC: Maybe this is a new strategy, when you’re going to throw, your opponent should just target your eyes. MD: It’s so odd, like they are crazy sensitive. I don’t know if cramping is the right word, but if my eye gets itchy and I know I’m gonna have to put my finger in there, my heart rate cranks up. It’s bizarre. JC: Good thing you don’t have to wear contacts. MD: I’d have glasses or I’d just go blind. Either or. (laughs) 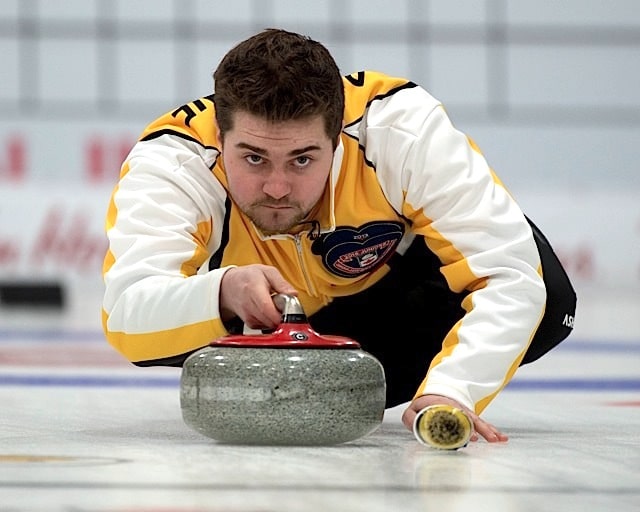 8. Alright, and this last one comes from Chelsea Carey, who had the added benefit of knowing I would be interviewing you, and she asks, what do you think are the best and worst Manitoba tuck deliveries of all time, and who did you model yours after? MD: Nice, great question Chelsea! Best of all time I don’t know if I can say, but personally I love BJ Neufeld’s. I love how low he is to the ice, and he makes a ton of shots. Worst tuck is tough. I’ve played a lot of tuckers. I think I would have to go with my own teammate again here, Kyle Doering. The guy tucks with a crutch. Who tucks with a crutch? It’s gross. JC: What about Reid? I guess he’s a little more flat-footed than Kyle, but he brought out the crutch. I guess it’s a bit cooler because he designed his own. MD: Yeah, Reid gets a pass, but I think otherwise, if you tuck, you gotta have a corn broom. That should be the rule. As for my own, I don’t know. Lots of people say mine is gross. I know Colin Hodgson specifically told me mine was the ugliest he’d ever seen, but I think that was also a comment on my old curling shoes. JC: Those were horrible. MD: Yeah, he hated those, along with everyone else I think. Honestly, I’m not sure I modelled mine after anybody. The only person I can consciously think of watching closely is Mike McEwen, honestly. Him and I have different slides for sure, but I definitely watched some of his releases and what’s worked for him and tried to implement some of that for sure. 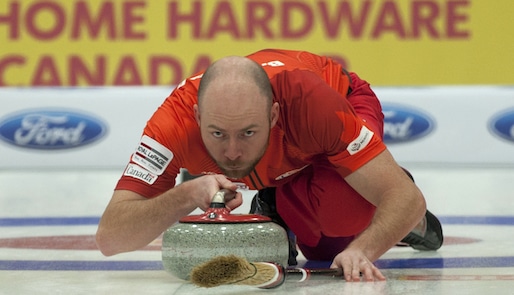 JC: Awesome, thanks Matt! And now I need a question from you, and my next interviewee is going to be part of a World Juniors double-dip, as I’m going to have your Team Canada teammate Mary Fay on the program next. MD: Mary Fay, eh? Hm. Okay. Ask her if she could marry any member of the 2016 Canadian Junior Men’s gold medal-winning team, who would it be and why? 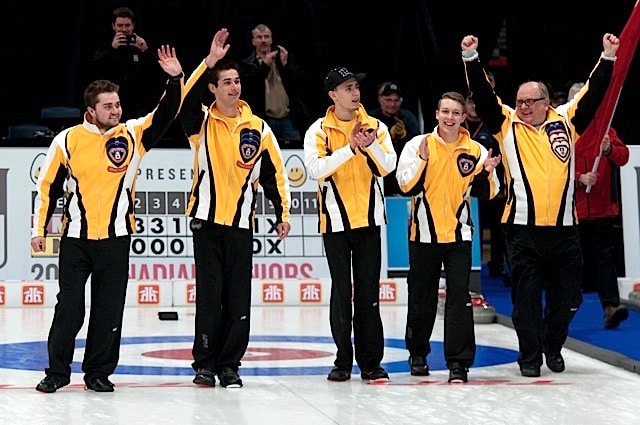 JC: (laughs) Oh man. This is ridiculous. Who do you think she’ll say? MD: I think she’ll say Colton Lott for sure. The kid’s a model, he’s a Johnny Mo-in-training. (laughs) I hope she says me though. (laughs) You can also tell her there’s a wedding in Denmark on the final night of Juniors if she’s so inclined. JC: (laughs) Oh my god. Amazing question, amazing interview, thank you sir and best of luck in Denmark! Be sure to follow Matt on Twitter @mattydunstone28 and as always, you can follow John @cullenthecurler.