Playing in the far north, big-game pressure situations are few and far between.

Which is what made Friday morning’s 2016 Tim Hortons Brier pre-qualifying round victory so satisfying for veteran Northwest Territories skip Jamie Koe. 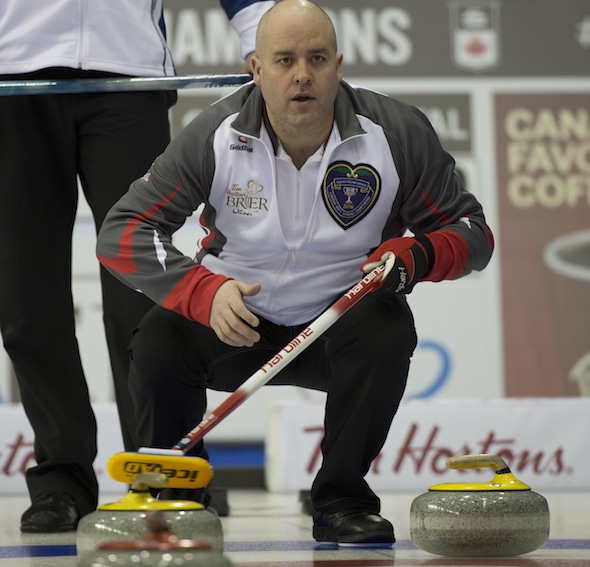 Jamie Koe and his team from Yellowknife are off to a 2-0 start in the Tim Hortons Brier pre-qualifying round. (Photo, Curling Canada/Michael Burns)

Koe made two nailbiting shots in the 10th end — a pair of delicate hack-weight takeouts of rocks partially buried in the four-foot — to finish off a crucial 6-5 win over Nova Scotia’s Jamie Murphy (Halifax) and improve to 2-0 in the pre-qualifying round at TD Place.

The win means Koe, third Chris Schille, second Brad Chorostkowski and lead Robert Borden are on the verge of qualifying for Saturday’s 2:30 p.m. (all times EST) play-in game, with a berth in the 12-team main field of the Tim Hortons Brier on the line.

“It was great,” said Koe. “I was just thinking about that. We haven’t had a lot of chances to make clutch shots to win big games like these other guys have all year, so it’s kind of big to us to put us in that situation in a game we needed to win, and needing to make the last two shots to do it. It feels good to know you can make that shot in that situation.” 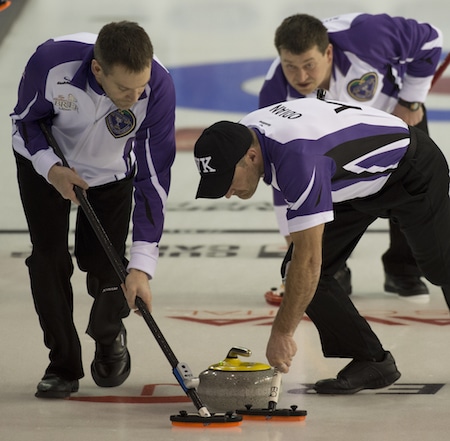 Koe had a chance to do it early, as well, but was heavy on his draw for two in the second end after the Bluenosers (1-1) opened with s first-end single.

But Murphy returned the favour in the fourth, throwing his draw for two through the rings. The Territories made him pay with a deuce in the fifth.

Nova Scotia tied the game 5-5 with a ninth-end deuce, setting the stage for Koe’s heroics in the 10th.

In the other game Friday morning, the Yukon’s Bob Smallwood (1-1; Whitehorse) was a 14-4 winner over Nunavut’s Wade Kingdon (0-2; Iqaluit).

The pre-qualifying round-robin comes to a close later Friday, with the Northwest Territories playing Yukon and Nova Scotia taking on Nunavut.

The top two teams from the PQ round will meet in the play-in game Saturday at 2:30 p.m.

“We knew (Friday) was a big day; we had Nova Scotia first and now we have a big game against Yukon that we still have to win to finish first,” said Koe. “But it’s in our hands now. We win, we get first place, we get (choice of) rocks, we get hammer, all that good stuff. And that’s important. We put ourselves in a position to do it; now we just have to come out at 4:20 and do it.”

Meanwhile, the preliminary round of the Ford Hot Shots goes Friday at 2 p.m,

For ticket and other event information, visit https://www.curling.ca/2016brier/tickets/

For the complete schedule, go to https://www.curling.ca/2016brier/draw/

This story will be posted in French as soon as possible at https://www.curling.ca/2016brier/?lang=fr

TSN (RDS2 in French), the exclusive television network for Curling Canada’s Season of Champions, will provide complete coverage of the 2016 Tim Hortons Brier.