OTTAWA – Veteran skip Brad Gushue of Newfoundland-Labrador scored 26 of a possible 30 points to beat lead Denni Neufeld of Manitoba in the final of the Ford Hot Shots skills competition Saturday. 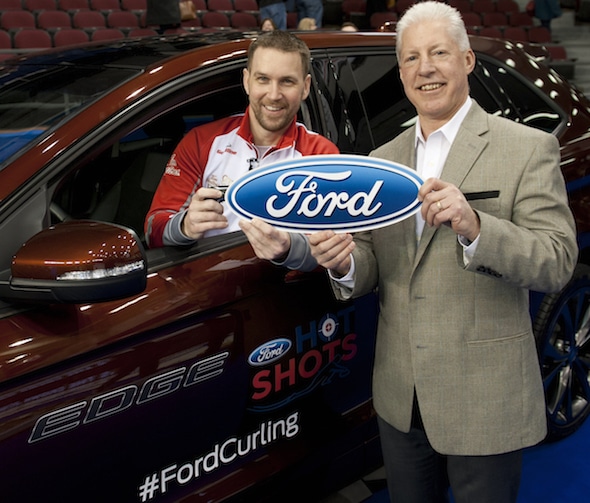 Gushue wins a two-year lease on a 2016 EcoBoost powered Ford Edge Sport SUV, with an approximate retail value of $49,789 MSRP. Neufeld, who scored 23 points after getting zero when he missed on the hit-and-roll shot, gets $2,000 as the runner-up. His skip Mike McEwen receives $1,000 for third place. “The biggest thing for me is the opportunity to throw more rocks,” said Gushue, who is in his 13th Tim Hortons Brier. “Most years I’m not as intense as I am in a game just because you’re worried about the games and you don’t want to wear yourself out. “But I look back at the years I have made the (Brier) playoffs I had a much better feel for the ice. So I had a little more focus yesterday, a little more intensity and was able to squeak through. “Winning the car is pretty exciting, too. Anytime you have a chance to win a car for a couple of years is pretty cool.” The annual competition sees curlers attempting six different shots: Hit and Stay, Draw the Button, Draw the Port, The Raise, Hit and Roll and Double Takeout. Each shot is awarded points on a scale from 0-5 depending on the end result of the shot. Eliminated in Saturday’s first round of the playoffs were E.J. Harnden of Northern Ontario (21 points), preliminary round leader Brett Gallant of Newfoundland-Labrador (20), Brad Jacobs of Northern Ontario (21) and Mike Kennedy of New Brunswick (23). McEwen (21) and Scott Jones of New Brunswick (18) were eliminated in the semifinals. Gushue, Jones and Neufeld led all shooters in the first round with 26 points while McEwen moved on with 24. Gushue and Neufeld both posted 25 points in the semifinals to reach the final.