OTTAWA – There are turning points in games – both on the scoreboard and in the minds of players – and for Brad Jacobs and his still unbeaten Northern Ontario teammates, that came early Monday evening against Pat Simmons and Team Canada. Simmons jumped out to a 3-0 lead in the first end only to give it all back, and then some, in the second when he gave up four on a spectacular triple kill by Jacobs. “Huge turnaround,” Jacobs said of the shot. “We could easily miss that shot, give up another steal and it’s 4-0. The point swing is probably a steal (for them) to four for us, five-point swing. It was a big moment in a big game. Coming back and making that shot, it was huge for us. If we don’t make that shot we’re probably really down in the dumps and emotionally not feeling well about our chances to win. It completely turned everything around.” The Sault St. Marie foursome of Jacobs, third Ryan Fry, second E.J. Harnden, lead Ryan Harnden, alternate Lee Toner and coach Caleb Flaxey stole one in three before Team Canada (3-2; Calgary) righted itself on a Simmons draw for one against four Northern Ontario counters in a rematch of the 2015 Tim Hortons Brier final. They got back on even terms with two in the sixth, only to turn around and surrender three to Jacobs in the seventh. It was Team Canada’s second loss of the day, leaving Northern Ontario the only unbeaten team at 4-0. “I’m real happy our team is undefeated at this point,” said Jacobs. “I still don’t think there’s a chance that we will go undefeated, we have to slip up at some point and someone I’m sure is going to through an amazing game at us. One of the big reasons we’re 4-0 and we’re taken advantages of almost all of our opportunities to this point.” Kevin Koe of Alberta (4-1; Calgary), having beaten his younger brother Jamie in the afternoon, rolled over Tim Hortons Brier rookie Mike McEwen of Manitoba (2-2; Winnipeg) in the evening. Koe opened with a deuce and when McEwen was a touch heavy with a freeze try in the fourth, leaving just enough separation, Koe hit a perfect hit-and-stick for four and a 6-1 margin. 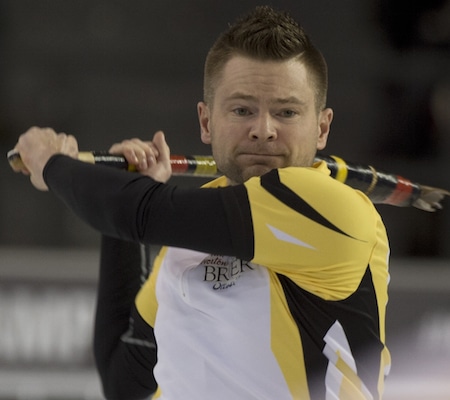 “We maybe missed a handful of shots at the most, our best game of the week for sure,” said Koe. “They missed a couple of real close ones and we played a perfect first end. I mean we made everything and put some pressure on them. A deuce in the first end is big. In the fourth he gambled a little and was a little off and that was pretty much the ball game.” McEwen, in his first Tim Hortons Brier, said his decision to freeze was a decision to put the game on the line. “We could get out of it with a good draw,” he said. “Hit and roll you’re still giving up two, you’re down 4-1, probably not winning anyways. Probably at a 90 per cent loss rate, down 4-1 to a team like that. I don’t regret the decision.” In the two other evening games, Glenn Howard of Ontario (3-2; Etobicoke) scored deuces in the first and third ends to roll past Mike Kennedy of New Brunswick (1-3; Grand Falls) while Steve Laycock of Saskatchewan (2-3; Saskatoon) stole three in the eighth end to beat Jean-Michel Ménard of Quebec (1-3; Saint Romuald). Not playing in the evening draw were Brad Gushue of Newfoundland-Labrador (3-1; St. John’s), Jim Cotter of B.C. (2-1; Vernon-Kelowna), Adam Casey of P.E.I. (1-3; Charlottetown-Summerside) and Jamie Koe of Northwest Territories (0-4; Yellowknife). Tuesday’s draws are at 9:30 a.m., 2:30 and 7:30 p.m. ET. For ticket and other event information, https://www.curling.ca/2016brier/tickets/ For the complete schedule, go to https://www.curling.ca/2016brier/draw/ This story will be posted in French as soon as possible at https://www.curling.ca/2016brier/?lang=fr TSN (RDS2 in French), the exclusive television network for Curling Canada’s Season of Champions, will provide complete coverage of the 2016 Tim Hortons Brier.