OTTAWA – Pat Simmons and Team Canada scored an impressive bounce-back victory while Jamie Koe of Northwest Territories got his first win at the Tim Hortons Brier Tuesday. Canada gave up a deuce in the opening end to Jim Cotter of B.C. (2-4; Vernon-Kelowna) but played a patient game until the fourth when the reigning champs broke it open with a huge five-ender en route to an 8-4 win. Cotter tried to raise a Canada (4-2; Calgary) stone onto his own to bump it into shot rock. Instead he opened up the house, left himself exposed and Simmons jumped on the opportunity. An exchange of shots later and Simmons made a routine tapback on Cotter’s only rock in the house to score the decisive points. “We stayed patient and finally got a chance and made him pay,” said Canada lead Nolan Thiessen. “You can’t press too much out there. Everybody is so good, if you press too much you might end up giving up steals and those just seem to be death out here.” Simmons said patience from himself, Thiessen, third John Morris, second Carter Rycroft, alternate Tom Sallows and coach Earle Morris was the key to that end and their victory. “The worst thing we could have done was grip the handle too tight and really panic after we gave up that two in the first.” In the fourth end, he said Canada “caught some good angles, put rocks in good spots. Again we played a patient end in the sense we weren’t worried about getting shot right away. When we had the chance we seemed to make the right shots at the right time that end. “Definitely a big comeback win for us,” Simmons said of the win that came after two losses on Monday. “Weeks can get away on you in a hurry, especially when every team is so good. To have been there, done that, being able to refocus is important, experience helps.” While Canada was picking up its fourth win to stay in the thick of the chase for playoff spots, the Territories finally were rewarded for its steady play this week. “In the games we lost we were still playing well, shooting high 80s or low 90s,” said Koe, who ended a 19-game Brier losing streak, and his Yellowknife team is now 1-5. 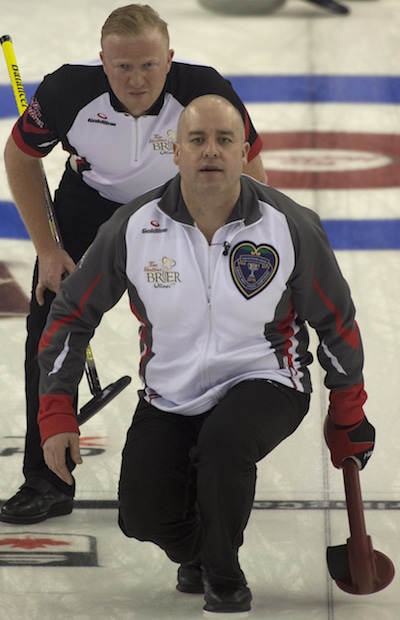 Ontario appeared to have the game under control with a 5-3 lead until the eighth end when Koe took a gamble and it paid off with four and, ultimately, an 8-5 win. “It was a big shot in eight,” he said. “Risk and reward, go for four or two to tie. We figured close games weren’t going our way so we took the risk and made it.” In another key game between two 4-1 teams, Brad Gushue of Newfoundland-Labrador (St. John’s) drew the four-foot with final stone to score one in the 10th for a 4-3 win over Alberta’s Kevin Koe and his Calgary team. Gushue and Koe, veterans who have battled each other often through the years, didn’t give each other a chance through the first three ends. Gushue finally created a break in six that gave him a deuce. After Koe make a thin pick, Gushue threw a perfect freeze that Alberta couldn’t remove, leaving the Newfoundland-Labrador skip a draw to the four foot for two and a 3-1 margin. In the other game in the afternoon draw, Steve Laycock of Saskatchewan (3-3; Saskatoon) got deuces in the third and seventh ends to beat Adam Casey of P.E.I. (1-5; Charlottetown-Summerside) 8-5. Not playing in the afternoon draw were Brad Jacobs of Northern Ontario (5-0, Sault Ste. Marie), Mike McEwen of Manitoba (3-2; Winnipeg), Jean-Michel Ménard of Quebec (2-3; Saint-Romuald) and Mike Kennedy of New Brunswick (1-4; Grand Falls). Tuesday final draw is at 7:30 p.m. ET. For ticket and other event information, https://www.curling.ca/2016brier/tickets/ For the complete schedule, go to https://www.curling.ca/2016brier/draw/ This story will be posted in French as soon as possible at https://www.curling.ca/2016brier/?lang=fr TSN (RDS2 in French), the exclusive television network for Curling Canada’s Season of Champions, will provide complete coverage of the 2016 Tim Hortons Brier.