Brad Gushue and his Newfoundland/Labrador champs from St. John’s can now start thinking about their weekend schedule.

With the win, Newfoundland/Labrador improved to 8-1 in round-robin play at the 2016 Tim Hortons Brier — good enough to not only keep pace with leading Brad Jacobs of Northern Ontario (8-0; Sault Ste. Marie), who had a bye, but also to nail down one of the four available playoff positions. 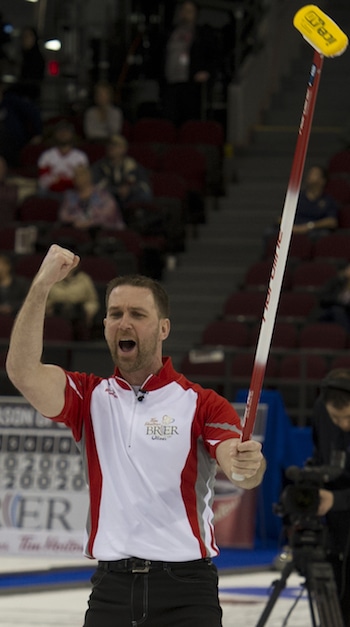 Gushue had to make a scary outturn draw down a very frosty path to get to the button, with B.C. sitting shot biting the back of the button.

“That wasn’t a draw, it was a hit that slowed down to the tee-line,” said a relieved Gushue, who’s still seeking his elusive first Tim Hortons Brier gold medal. “I probably threw 20 to 25 feet more weight than what we were throwing down the other side. I could feel the frost under the rock as I was sliding out, and I had to give it a bit of a shove and bit of spin just to keep it alive out there. Heck of a job by the guys to keep it alive and keep it going.”

And, wouldn’t you know it — Newfoundland/Labrador and Northern Ontario are on a collision course. They’ll meet in the final round-robin draw, Friday at 9:30 a.m. (all times ET), likely with first place on the line and a berth in Friday night’s Page 1-2 playoff game.

And while Gushue’s focus remains firmly on his next assignment, against P.E.I.’s Adam Casey Thursday at 2:30 p.m., he has certainly noticed Northern Ontario’s performance here.

“They’re a great team,” said Gushue of the looming battle of Olympic gold-medallists (Gushue won in 2006; Jacobs in 2014). “Brier and Olympic champions, and there’s only one other skip (Kevin Martin) to do both. When they get going with confidence, they’re tough to beat and they seem to have that confidence now. But I do believe that this ice will be a wild card.”

In other Thursday morning games, Alberta’s Kevin Koe was an 8-3 winner over Team Canada’s Pat Simmons in a battle of Calgary teams. The win not only clinched at least a tiebreaker berth for the 7-3 Albertans, it also left Team Canada (5-5) all but eliminated from playoff contention.

“We’re in good shape,” said Koe. “We’ve thrown it well all week. We had a tough loss against Northern Ontario, where they played great. But bounced back, won a few in a row and put ourselves in a good spot.” 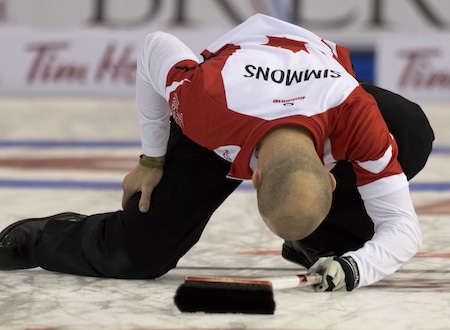 In the other morning games, P.E.I. (2-7; Charlottetown/Summerside) beat Jamie Koe of the Northwest Territories (1-8; Yellowknife) 7-4; while Saskatchewan’s Steve Laycock (5-5; Saskatoon) stayed barely alive for a playoff spot with a 7-4 win over Glenn Howard of Ontario (4-6; Etobicoke).

The third- and fourth-place teams after round-robin play will meet in the Page 3-4 game Saturday at 2:30 p.m.; the winner will advance to the semifinal Saturday at 7:30 p.m. against the Page 1-2 loser.

The Page 3-4 loser and semifinal loser will play for the bronze medal Sunday at 2:30 p.m.

The winner of the 2016 Tim Hortons Brier not only will represent Canada at the 2016 World Men’s Championship, April 2-10 in Basel, Switzerland, it will also earn berths in the 2016 Home Hardware Canada Cup in Brandon, Man.; the 2017 World Financial Group Continental Cup, presented by Boyd Gaming, in Las Vegas, and the 2017 Tim Hortons Brier in St. John’s.

Additionally, should the Tim Hortons Brier winner earn a medal at the worlds in Switzerland, it will also qualify for the 2017 Tim Hortons Roar of the Rings in Ottawa — the event that will decide Canada’s four-player teams for the 2018 Winter Olympics in PyeongChang, South Korea.

For ticket and other event information, visit https://www.curling.ca/2016brier/tickets/

For the complete schedule, go to https://www.curling.ca/2016brier/draw/

This story will be posted in French as soon as possible at https://www.curling.ca/2016brier/?lang=fr

TSN (RDS2 in French), the exclusive television network for Curling Canada’s Season of Champions, will provide complete coverage of the 2016 Tim Hortons Brier.