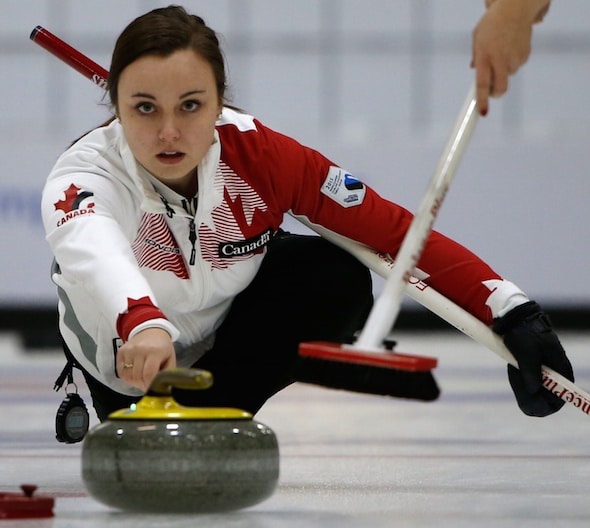 Eight teams of each gender compete in the ninth edition of the four-day event, staged in partnership between Canadian Interuniversity Sport (CIS) and Curling Canada and hosted this year by the Kelowna Curling Club and UBC Okanagan. The teams play a round robin ending Tuesday evening, with the top four finishers qualifying for the semifinals pitting 1 vs. 4 and 2 vs. 3 on Wednesday morning at 9:30 a.m. The winners then advance to their respective finals in the afternoon at 2:30 p.m. local (PT), while the losers meet in bronze-medal games at the same time. The women’s field is topped by University of Alberta Pandas skip Kelsey Rocque, a two-time Canadian and world junior champion and the defending CIS-Curling Canada champion. Rocque won gold for Alberta at the 2014 Canadian Juniors at Liverpool, N.S., then took the world junior women’s crown for Canada at Flims, Switzerland. Last year, she successfully defended both titles, winning the Canadian Juniors at Corner Brook, N.L., then going unbeaten at the world juniors at Tallinn, Estonia. She capped off a remarkable year by capturing her first CIS-CC championship at Waterloo, Ont., beating Corryn Brown of Thompson Rivers University (Kamloops, B.C.) in the final after being the runner-up in two previous CIS-CC Championships. Rocque and Brown were voted the first and second team all-star skips, respectively. Rocque also participated in the 2015 Home Hardware Canada Cup last December at Grande Prairie, Alta., competing against some of the finest women skips in the world, including Jennifer Jones, Rachel Homan and Val Sweeting. Brown, winner of the 2013 Canadian Juniors at Fort McMurray, Alta. when representing British Columbia, returns for a third straight year as the skip of the Thompson Rivers University Wolfpack. 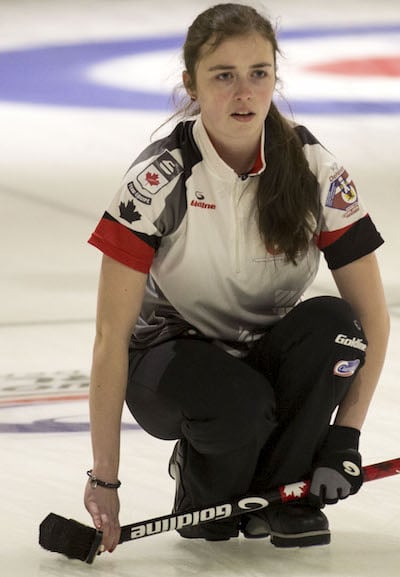 Also competing this year is Dalhousie University Tigers skip Kristin Clarke of Halifax, who on Sunday captured a gold medal at the 2016 World Junior Championships at Taarnby, Denmark, as third for Canada’s Mary Fay, after winning the 2016 Canadian Juniors at Stratford, Ont. Another skip with national experience is Waterloo’s Chelsea Brandwood of Wilfrid Laurier University Golden Hawks, who was the silver medallist when skipping Ontario at the 2015 Canadian Juniors, losing the final to Rocque. Topping the men’s lineup is defending champion skip Thomas Scoffin of the University of Alberta Golden Bears. Scoffin, who also appeared in a record seven Canadian Juniors as skip — six for Yukon and one for Alberta, won the gold medal last year at Waterloo, Ont., defeating Aaron Squires of Wilfrid Laurier University Golden Hawks in the final. Former Ontario junior champion Squires, who was voted first team all-star honours at last year’s CIS-CC championship (Scoffin was the second team all-star skip), will once again represent Waterloo’s Wilfrid Laurier. Other skips include former provincial junior champions Matthew Manuel of Nova Scotia (Dalhousie University Tigers) and Corey Chester of British Columbia (University of Victoria Vikes). UBC-Okanagan Heat, as co-host, will be skipped by Justin Nillson. The Wilfrid Laurier Golden Hawks swept the men’s and women’s titles at the inaugural CIS-CC Championships in 2008, which were staged at the Guelph and Elmira Curling Clubs, with Mike Anderson’s team taking the men’s crown and Hollie Nicol capturing her first of two consecutive women’s titles. Other winning women’s teams were skipped by Carleton University’s Jamie Sinclair in 2014 (at Regina), University of Manitoba’s Breanne Meakin in 2013 (at Kamloops, B.C.), Wilfrid Laurier skip Laura Crocker in both 2012 (at Welland, Ont.) and 2011 (at St. John’s) and the University of Regina’s Brooklyn Lemon in 2010 (at Edmonton). On the men’s side, the University of Alberta is a two-time winner (Scoffin last year and Brendan Bottcher in 2012 at Welland, Ont.). Other winning skips are University of Manitoba’s Matt Dunstone (also a two-time Canadian Junior champion) in 2014 (at Regina), University of Waterloo’s Jake Walker in 2013 (at Kamloops, B.C.), Memorial University’s Colin Thomas in 2011 (at St. John’s), Queen’s University’s Jon Beuk in 2010 (at Edmonton) and the University of Regina’s Chris Busby in 2009 (at Montreal). Draw results will be available at www.curling.ca while event information, including the rosters and official draw, can be found at www.curling.ca/2016university. The winning teams will then represent Canada at FISU’s 28th Winter Universiade, Jan. 28-Feb. 8, 2017 at Almaty, Kazakhstan.