World champ has Dalhousie on a roll in Kelowna

by Grayson Leahy For the women’s tournament at the CIS / Curling Canada University Championships, the second draw on Sunday put UNB against Laurier, Alberta against Guelph, Brock against Dalhousie, and Brandon against TRU. The Brock Badgers (Terri Weeks) and Dalhousie Tigers (Kristin Clarke) left the first and second ends blank, before the Tigers scored first in the third. With never more than a single point scored in any end, the Tigers held a 4-1 lead after the seventh, before Brock took one in both the eighth and ninth to pull within one heading into the final end. The only game to go a full ten ends, it ended with a perfect hit and stay from Dalhousie skip Kristin Clarke to give her team the winning point on the final stone of the match. After the win, Clarke said that having a shot to win the game isn’t something that feels the least bit nerve-racking. “It’s just really exciting, knowing that I have a shot that I’ve been able to make all year,” said the Tigers skip, continuing, “[I] just gotta take it like I’ve taken every other shot I throw, no different than any other shot.” 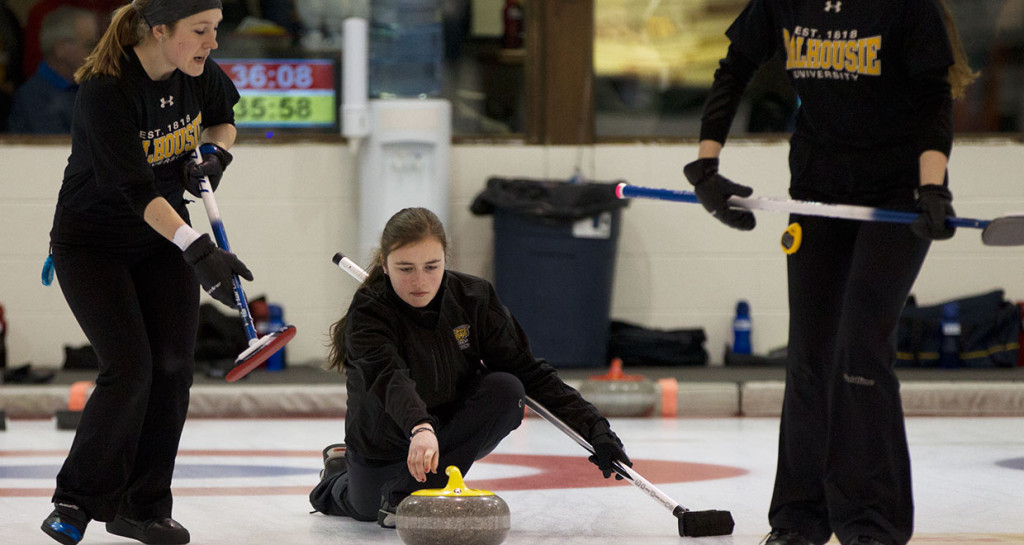 Clarke recently won the 2016 World Juniors as vice for Nova Scotia’s Mary Fay, and asked about what it means to be in a position to win another championship so quickly, the Halifax native said, “It feels absolutely unreal, it’s pretty cool. I mean, it’s been a great season, but just gotta come here, focus, and take it one shot at a time.” With her Dalhousie team now standing as one of only two teams without a loss in the tournament so far (the other being the TRU WolfPack), that mentality seems to be working. The University of New Brunswick Varsity Reds (Samantha Crook) scored first against the Laurier Golden Hawks (Chelsea Brandwood), with two in the first end. Building on three scored in the third end, though, Laurier took a 6-3 lead into the sixth end. Laurier scored three more in the seventh, to go up 9-5, before taking the game by a final score of 11-6 after nine ends. Laurier’s record improves to 1-1 with the win, while the Varsity Reds fall to 0-2 on the tournament. The University of Alberta Pandas (Kelsey Rocque) scored three in their second end against the Guelph Gryphons (Jestyn Murphy), and kept rolling to take a 5-1 lead into the sixth end. Alberta went on to win the game 7-2 after eight ends, putting both teams’ records at 1-1 for the tournament so far. 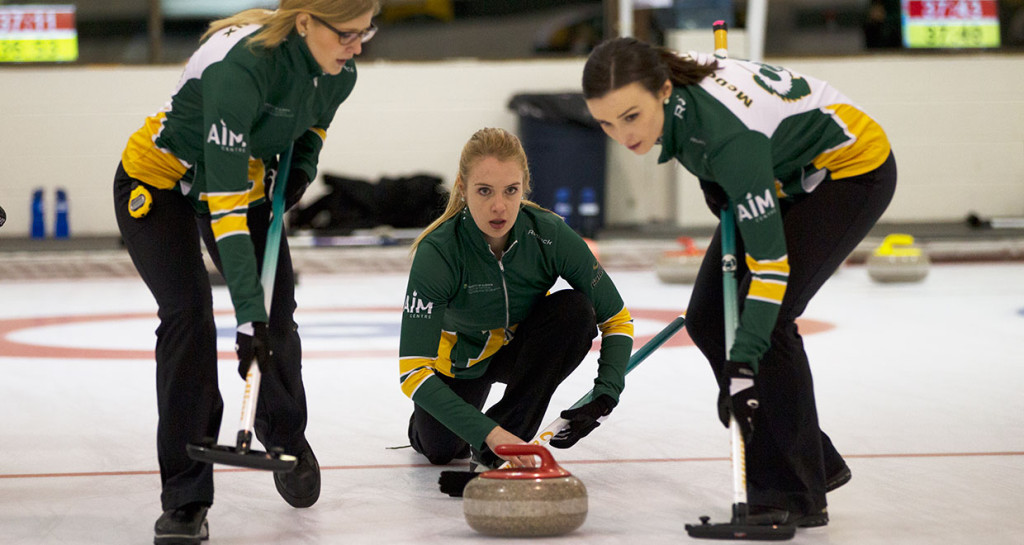 The Thompson Rivers WolfPack (Corynn Brown) kept up the strong performance from their first game, and rolled to a 5-2 lead against a recently revived Brandon Bobcats (Janelle Vachon) team after five ends. After scoring three more in the eighth end, the WolfPack took the game 9-3, improving to 2-0 for the national championship tournament so far. The second draw of the opening day on the men’s side at the CIS / Curling Canada University Championships saw Saint Mary’s take on Wilfrid Laurier, Alberta against Brock, Waterloo against Dalhousie, and UBC Okanagan against fellow British Columbians, the University of Victoria. 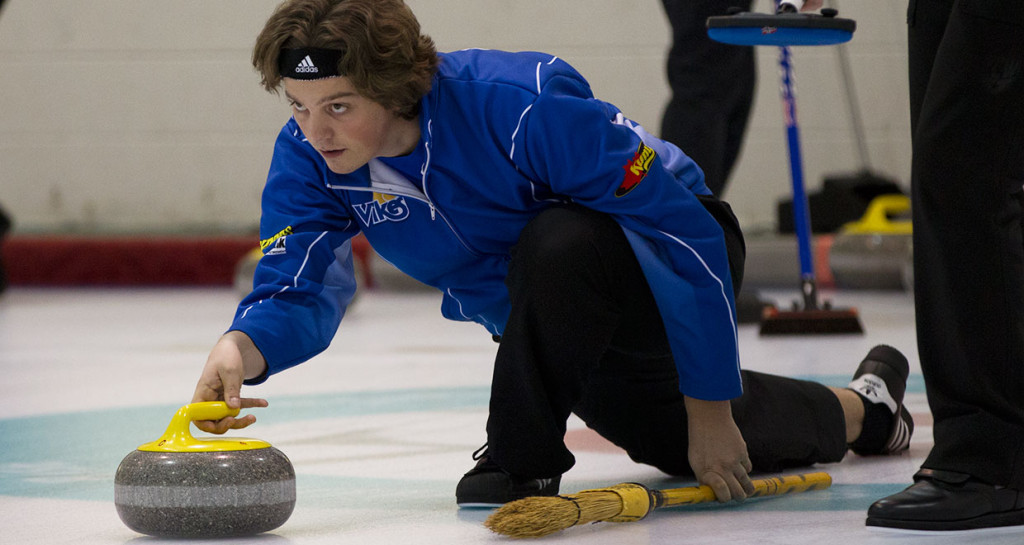 The UBC Okanagan Heat (Justin Nillson) had a strong start in their second game, jumping out to a 5-2 lead over the Victoria Vikes (Corey Chester) after the fourth end. The Vikes scored three in the fifth end to tie it up at 5, then two more in the seventh to take a 7-5 lead. The last of the men’s evening draw to finish, and the only game going more than eight ends, the Vikes won it 9-5 running UBC out of stones in the 10th end. Victoria ends up 2-0 after the first day of the tournament, while UBC Okanagan sits at 0-2. Wilfrid Laurier (Aaron Squires) had an outstanding fourth end, scoring five to earn a 5-2 lead over Saint Mary’s (Adam Cocks). Scoring three more in the fifth end, the Golden Hawks took a commanding 8-2 lead, and didn’t let up. Laurier beat Saint Mary’s 10-3 after eight ends, putting the Golden Hawks at 2-0 for the tournament so far, while the Huskies fall to 0-2. The Dalhousie Tigers (Matthew Manuel) also took a huge lead in their game, going up 8-1 over the Waterloo Warriors (John Willsey) after the fifth end. Waterloo scored one in each of the sixth and seventh ends, but Dalhousie took the game 9-3 after eight ends, putting the Tigers at 1-1 for the tournament, and making the Warriors 0-2. The Alberta Golden Bears (Thomas Scoffin) jumped out to a 4-1 lead over the Brock Badgers (Eric Bradey) after the third end, and went on to win 10-3 after eight ends, putting Alberta at 2-0 in the tournament, and the Badgers at 1-1. Round robin play continues through to Tuesday followed by semi finals and gold and bronze medal games on Wednesday, March 23. Four teams from each 8 team round robin will advance to those respective medal rounds. The winners of the CIS / Curling Canada University championships will represent Canada at the 2017 World University Games in Almaty, Kazakhstan. Full scores, standings and team rosters  can be found here: Women: https://www.curling.ca/scoreboard/#!/competitions/2061 Men: https://www.curling.ca/scoreboard/#!/competitions/2062