Just one team remains with a perfect record in the CIS / Curling Canada National University Championships. (by Jesse Matthews) Last year’s men’s finalists, the University of Alberta (6-0) and Wilfrid Laurier (5-1), were matched up in to start Day 3, but the Golden Bears ultimately bested the Golden Hawks by a score of 6-4 to emerge as the sole unscathed team in the tournament. “We know they’re a good team,” commented Golden Hawks skip Aaron Squires. “They got off to an early start with a deuce and then we were clawing our way back in from there on. They didn’t miss a shot.” 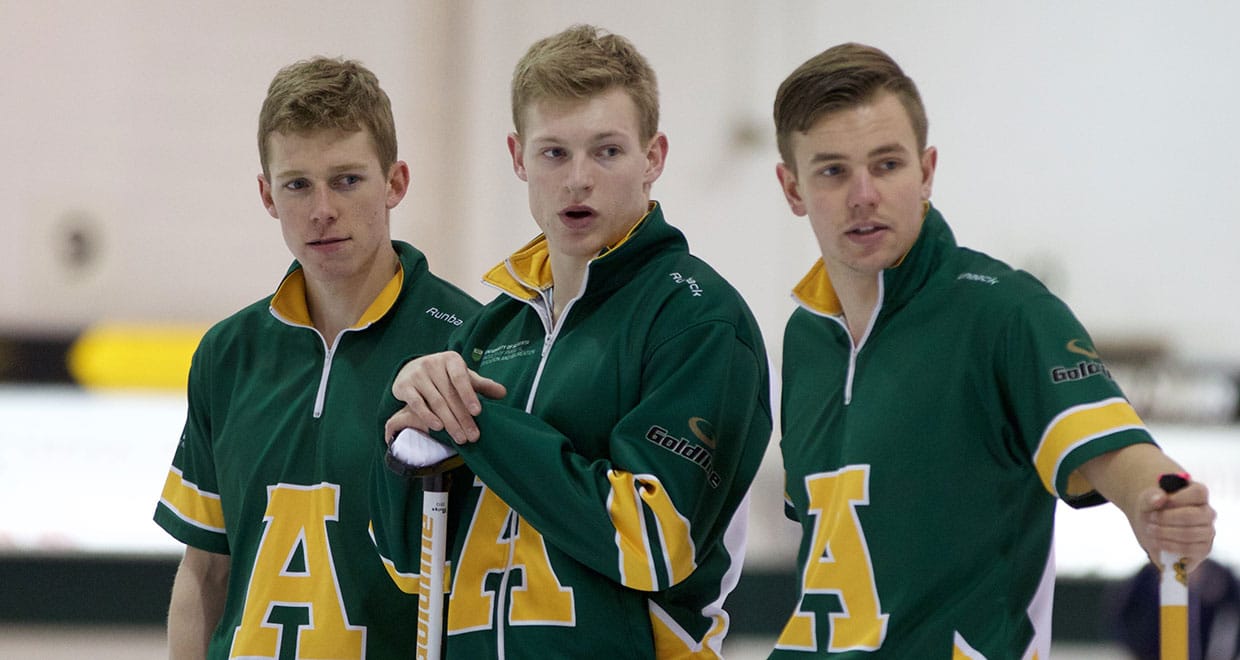 Squires’ Golden Hawks were no slouches themselves, curling as a team at a strong 83%. However, his praise of Thomas Scoffin’s Golden Bears was well founded – the 2015 CIS Champions curled at an otherworldly 89% as a team, including a near flawless 96% from second Jason Ginter and 95% from third Karsten Sturmay. Both teams have clinched playoffs spots on Wednesday morning. “We knew they were going to be tough to beat and knew that it was going to be a fun game,” noted Scoffin. “A lot of shots were being made out there. It feels good to get that win and we’re happy to be in this place going into playoffs tomorrow.” Nearby the University of Victoria Vikes (4-2) fell to the Waterloo Warriors (2-4) by a score of 4-3. Waterloo showed the strongest numbers of the tournament for the men’s draw so far, curling at 91% in their upset victory. Despite the loss, the Vikes have secured a playoff berth on Wednesday. The Brock Badgers (3-3) triumphed over the UBC Okanagan Heat (2-4) by a score of 8-2 after eight ends of play, while the Saint Mary’s Huskies (1-5) logged their first win of the tournament by eking out a 6-5 victory over the Dalhousie Tigers (1-5). 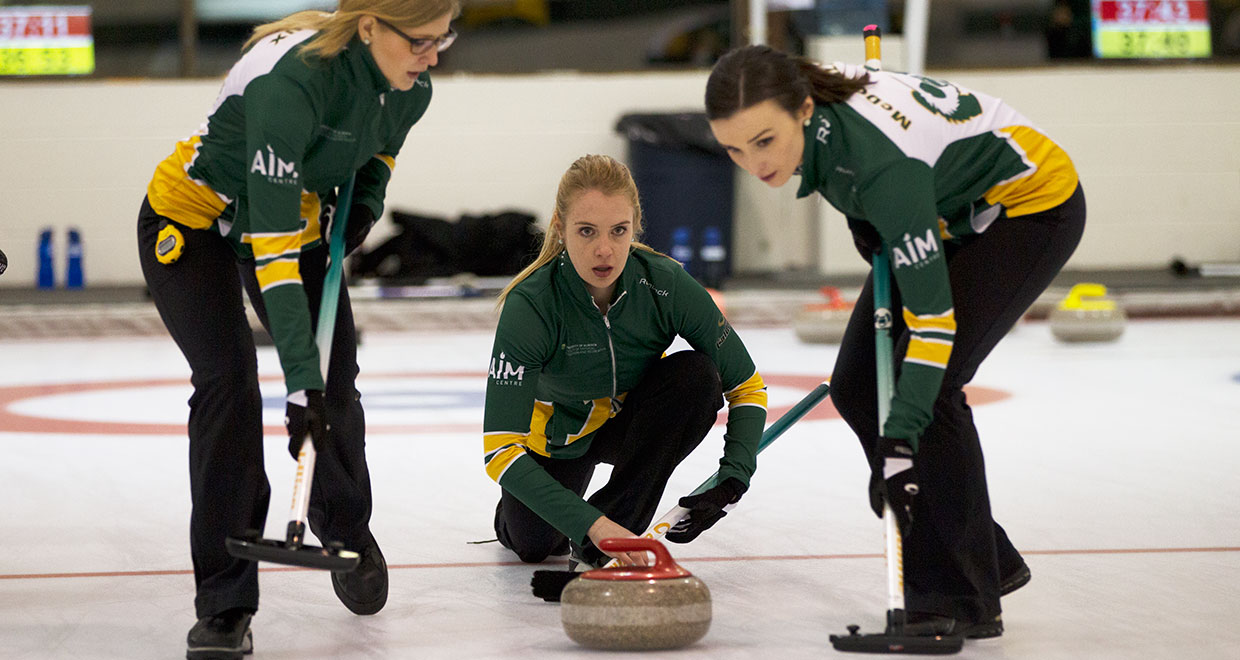 In the women’s draw the University of Alberta Pandas (5-1) have taken a one game lead over the rest of the field after defeating the Wilfrid Laurier Golden Hawks (2-4), and as a result have clinched a playoff spot on Wednesday. Thompson Rivers (4-2) was upset 7-2 by Brock (2-4) after eight ends of play, but the WolfPack have secured a playoff berth on Wednesday. Guelph (4-2) has also guaranteed themselves a playoff spot after beating the Brandon Bobcats (3-3) in nine ends, 4-2. Dalhousie (4-2) held off a late surge by the UNB Varsity Reds (0-6) to win 10-7. Two teams in the women’s draw are in a must win scenario in the final round of play this evening: Brandon and Dalhousie. While Brandon comes into the match with one less win than Dalhousie, both teams have lost to Guelph and to Thompson Rivers, so the tiebreaker will come down to whoever wins the match between them. All eyes will be on their sheet as round robin play concludes this evening in Kelowna. Four teams from each group of eight will advance from round robin play to the semifinals on Wednesday. Playoffs will commence with those semifinal matchups, followed by gold/bronze medal matches. The winners of the CIS / Curling Canada University Championships will represent Canada at the 2017 World University Games in Almaty, Kazakhstan.
Full scores, standings and team rosters can be found here: Women: https://www.curling.ca/scoreboard/#!/competitions/2061 Men: https://www.curling.ca/scoreboard/#!/competitions/2062