BASEL, Switzerland — A frustrating afternoon finally came to a satisfying end for Team Canada on Sunday at the 2016 World Men’s Curling Championship, presented by Ford of Canada. 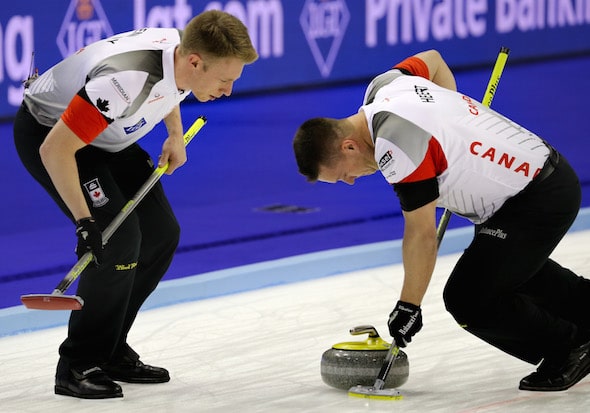 After struggling early with ice and weight control against Denmark’s Rasmus Stjerne, Kevin Koe’s Calgary team rallied in the back half, finally prevailing 11-8 in an extra end at St. Jakobshalle to improve to 2-0 in the 12-team round-robin competition.

Koe made a hack-weight come-around tapback to remove a buried Danish stone in the 11th end to score the winning three, prompting huge sighs of relief from his team and family in the stands.

“Obviously, it feels good just to get the win, especially with the way the game went,” said Koe, whose team is rounded out by third Marc Kennedy, second Brent Laing, lead Ben Hebert, alternate Scott Pfeifer, team coach John Dunn and national coach Rick Lang. “We really struggled with draw weight that game, and the ice was a little tricky. But just to hang in there and give ourselves a chance felt good. We made the shots we needed at the right time.”

Canada is back on the ice later Sunday, at 11 a.m. ET against John Shuster of the United States (1-1).

Denmark had taken control early when Stjerne, a former world junior champ, made a marvellous double-takeout to score three. After holding Canada to a single in the fourth, the Danes took advantage of a Koe miss in the fifth — his last-rock takeout overcurled and rolled too far — to steal one and take a 5-2 lead at the intermission.

Canada would shake off the doldrums of the first five ends by scoring a solid deuce in the sixth end — set up by a perfect early freeze from Hebert — to cut the margin to one point.

Then in the seventh, Koe’s wonderful hit-and-roll to the button, behind cover, left Stjerne with a difficult last shot. Stjerne was wide and heavy with his delivery, giving a tide-turning steal of two to the Canadians.

“You know when you get down, you’re going to have to make some big shots, and we have the right guy to do it in tough circumstances,” said Kennedy. “I thought Kevin played great, especially in the second half of the game.” 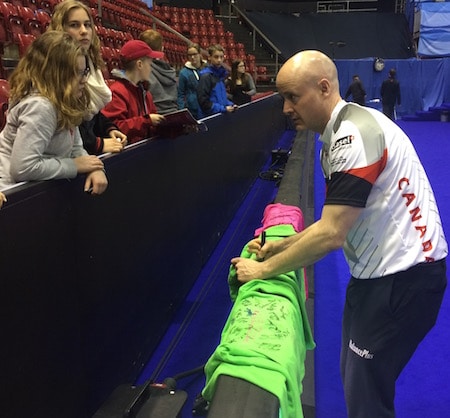 Denmark and Canada would trade deuces the next two ends, putting Canada up 8-7 going to the 10th, with both teams battling time-clock issues.

In the 10th, Canada played a near-textbook end to force Stjerne to hit for the single and force extra ends, setting the stage for Koe’s game-winning shot in the 11th.

“I don’t think any of it’s going to come easy,” said Kennedy. “We’re prepared for a bit of a grind this week, knowing how good these teams are and how much they want to beat us. We’re prepared for some adversity. So that was a big character win for us. We hung in there really well in some frustrating moments. That’s what we’ve been working on this year — to be able to win games like that.”