Ottawa’s Emma Miskew and Toronto’s Ryan Fry put together a second-half comeback Saturday night to reach the quarter-finals of the 2016 Canadian Mixed Curling Championship in Saskatoon. 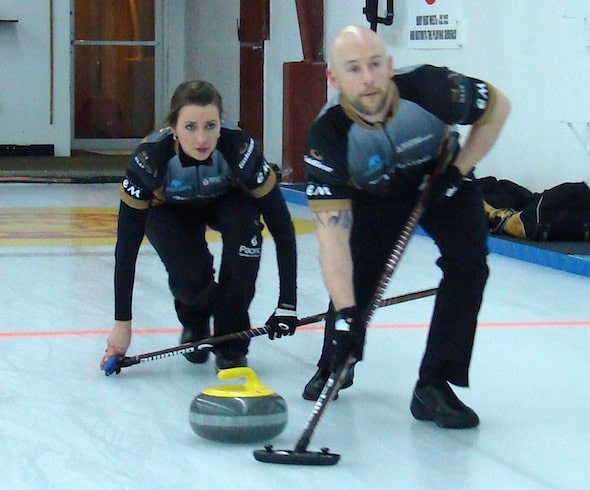 Ryan Fry and Emma Miskew secured their berth in the quarter-finals with a win Saturday night at the 2016 Canadian Mixed Doubles Championship. (Photo, Curling Canada/Darlene Danyliw)

Battling the Saskatchewan duo of Nancy Martin and Catlin Schneider, Fry and Miskew fell behind 4-2 after surrendering a fourth-end stolen deuce.

But Miskew and Fry rallied to tie it with single points in the fifth and sixth ends, and after giving up a single in the seventh, put away the win with three in the eighth end to reach the final eight.

Live-streaming broadcasts of the playoffs can be seen at https://www.youtube.com/user/ccacurling.

The four round-robin pool winners were seeded directly into the quarter-finals. Here are the pairings for the final eight: Miskew and Fry vs. Mike and Dawn McEwen (Winnipeg); Homan and Nichols vs. Jocelyn Peterman (Calgary) and Brett Gallant (St. John’s); Eagle and Epping vs. Marliese Kasner (Saskatoon) and Dustin Kalthoff (Saskatoon); and Park and Thomas vs. Laura Crocker (Edmonton) and Geoff Walker (St. John’s).

The winning team will earn the right to represent Canada at the 2016 World Mixed Doubles Championship, April 16-23 in Karlstad, Sweden.

Live scoring is available at https://www.curling.ca/scoreboard/#!/competitions/2057