BASEL, Switzerland — It was a perfect opening weekend in the win column, even it wasn’t always perfection on the ice. 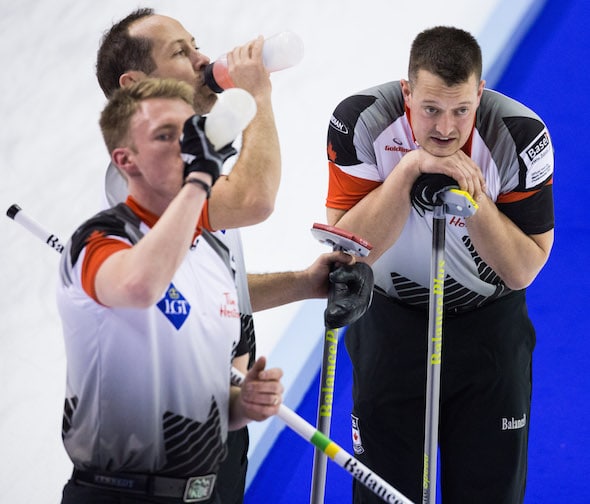 But it’s just all that Team Canada could ask for out of the opening two days of the 2016 World Men’s Curling Championship, presented by Ford of Canada.

A stolen 10-9 extra-end win over John Shuster of the United States on Sunday night at St. Jakobshalle left Kevin Koe’s Canadian team from Calgary with a perfect 3-0 record — tied with Sweden’s Niklas Edin atop the 12-team round-robin standings.

Were all three wins works of art? Not especially, but when big shots needed to be made, the Canadians made them, which is all Koe was looking for out of an opening weekend devoted to adjusting to the time zone and frosty ice conditions in a cavernous building that is rarely used for ice sports, making draw weight an adventure at times.

“It’s hard for us; we’re just so used to making so many shots, and we’re missing shots here by 20 feet, easy. It’s tough to get draw weight out here,” said Koe, whose team had a quick turnaround going into the evening game after a gritty extra-end triumph over Denmark’s Rasmus Stjerne in the afternoon draw Sunday. “But you know what? It’s the same for both teams. We just have to battle. Hans (Wuthrich) is a great icemaker, and sometimes this happens. The sheets will get worked in and more consistent as the week goes on. We got lucky today, but we’re 3-and-0.”

As was the case in the first two wins, the Canadians — Koe is backed up by third Marc Kennedy, second Brent Laing, lead Ben Hebert, alternate Scott Pfeifer, team coach John Dunn and national coach Rick Lang — were mostly at their best in the later ends.

It didn’t necessarily look that way in the late stages against the U.S.; Shuster made a simply brilliant runback double takeout to score what could have been crushing three in the ninth end.

But Koe came back to force the extra end by hitting for a deuce in the 10th end. And in the extra, Canada caught a massive break when U.S. third Tyler George’s peel attempt on a Canadian guard jammed, and left the Canadians sitting one in the four-foot.

Still, Shuster had a very makeable shot for the victory — a half-rock double takeout. But he was wide of the broom and left Canada with the stolen point.

“You can’t lose games like that and expect to win a world championship,” said Shuster, whose team dropped to 1-2. “We played great, and we’ve played better every game so we can build off that. But, we gotta wins those ones, bottom line. No reason to sugarcoat it.”

The Canadians, on the other hand, derived some satisfaction out of not being at their best but hanging tough when things weren’t going their way.

“One thing our team has been real good at all year is grinding,” said Hebert. “We came through the three-four game at the Brier, a lot of B- and C-event qualifiers to win ‘spiels. We’re not planning on going undefeated. But we’re certainly happy. Today wasn’t our ‘A’ game, but we’re battling and maybe we can come out tomorrow with a couple better performances.”

“Honestly?” added Koe. “I’m not really worried, just because we are 3-and-0. We escaped a little today, but we’re 3-and-0, I know this team, I know we’re going to get better, I know we’ll pick up on the ice, and I think the ice will get a little more consistent as well. I think we’re in a great spot.”

Canada’s overall record against the U.S. at the world men’s championship improved to 57-14 with the win — Canada’s 10th straight against  U.S. teams.