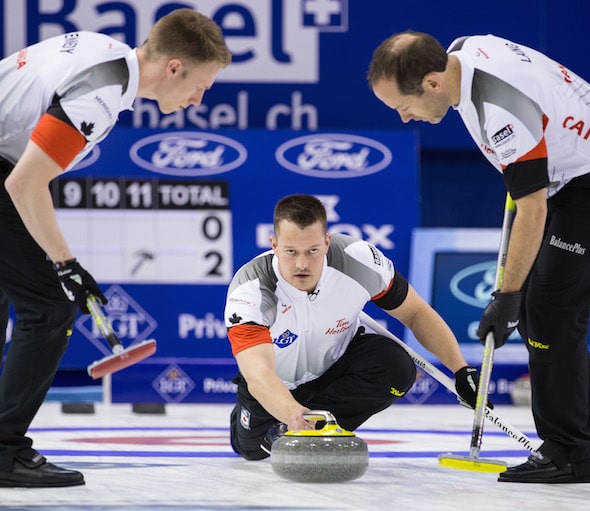 After all, they were on the receiving end of that gutting loss, back on April 12, 2009, in Moncton, N.B. — the infamous Kevin Martin 10th-end throw-through game.

Since then, though, it’s been nothing but Canadian victories, 12 in a row — the latest coming Monday at St. Jakobshalle, where Kevin Koe’s current edition of Team Canada (including both Kennedy and Hebert) downed Scotland’s Tom Brewster 5-3 to remain unbeaten, tied for first place with Sweden’s Niklas Edin at 4-0.

No, it didn’t erase the sting of the 2009 loss, admitted Kennedy, but in the 100th all-time meeting of Canada vs. Scotland at the world men’s championship, it was a nice step forward for the current team.

“We got away with a couple yesterday, and we realize we’re fortunate to be in the position we’re in,” said Kennedy. “We came out today a little looser, a little more excited to play, the conditions were better and we made more shots. This felt more normal for us. The speed was good, the rocks were doing what we thought they would do, and as a result, the team plays better. It’s pretty simple.” 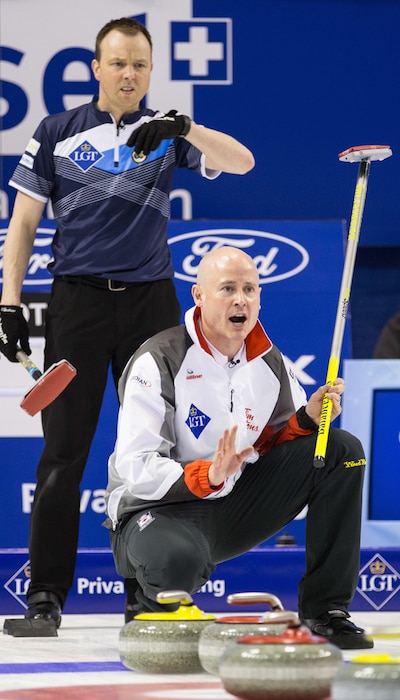 For the record, Canada holds an 80-20 advantage in the all-time series after Monday’s victory, but history was not on the minds of the Canadian team — just putting together a solid, clean 10 ends of curling following two sloppy extra-end victories on Sunday.

And, for the most part, it was mission accomplished for Canada, which dictated most of the game while keeping things reasonably simple.

“We played a little simpler off the start, but we played solid,” said Koe, whose team is rounded out by Kennedy at third, second Brent Laing, Hebert, alternate Scott Pfeifer, team coach John Dunn and national coach Rick Lang. “We didn’t throw as many draws, but we made most of them today. It’s still a little tricky for draw weight, but we played well — we were always in control. We weren’t really chasing much.”

Three blank ends followed before Canada finally managed to set up an end in the ninth, and Koe finished it off perfectly — a hack-weight hit to score a game-turning two that would prove to be the margin of victory.

The last Scottish victory over Canada — in fact, Murdoch beat Martin three times during those 2009 Ford Worlds in Moncton — is still debated among curling aficionados who debate the merits of Martin’s decision to throw his first shot of the 10th end through the rings.

Kennedy, though, believes that loss had a profound effect on the team

“I still say to this day that if we don’t lose that game, we don’t win the Olympics in 2010,” he said. “That was the first real adversity that that team had faced. And how we responded to that was going to determine whether we were going to be an Olympic team. We learned our lesson, and we a stronger team because of it the next year. There’s always positives to come out of those horrific losses.”

Canada returns to the ice later Monday against a Japanese team skipped by Yusuke Morozumi (3-1), who’s won two of his last three world championship assignments against Canada — he had wins against Brad Jacobs in 2013 at Victoria, B.C., and Koe’s former team in 2014 at Beijing