BASEL, Switzerland — At 7-0 and sailing along atop the standings at the 2016 World Men’s Curling Championship, it might be easy for Team Canada to start looking ahead to the playoffs at St. Jakobshalle. 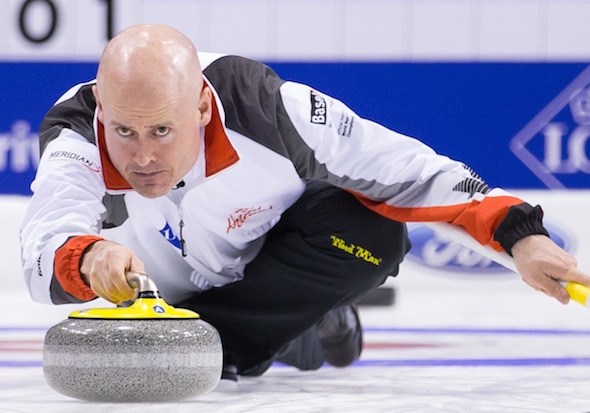 Also, there’s the small matter of the final four games on the round-robin schedule, particularly the final three — against reigning world champ Niklas Edin of Sweden Wednesday at 8 a.m. (all times ET), then on Thursday against 2014 world champ Thomas Ulsrud of Norway at 3 a.m. and then a showdown with Switzerland’s Sven Michel Thursday at 1 p.m. to close out the round robin in front of what’s sure to be a raucous pro-Swiss crowd.

In other words, even after all the positives of another two-win day — capped Tuesday night with a 7-2 triumph over Russia’s Alexey Tselousov — Team Canada is hardly strutting around Basel. There’s still plenty of work to do.

“We’re not looking anywhere past our next game,” insisted second Brent Laing, whose previous trip to Basel, in 2012 as a member of Glenn Howard’s Canadian team, produced Canada’s most recent world men’s championship gold medal. “We played another really good game tonight on tough ice conditions with a lot of frost. Draw weight was tough; luckily I didn’t have to throw one because it didn’t look like fun. But we have back-to-back games tomorrow, and that’s always a tough grind, and that’s where our focus is.” 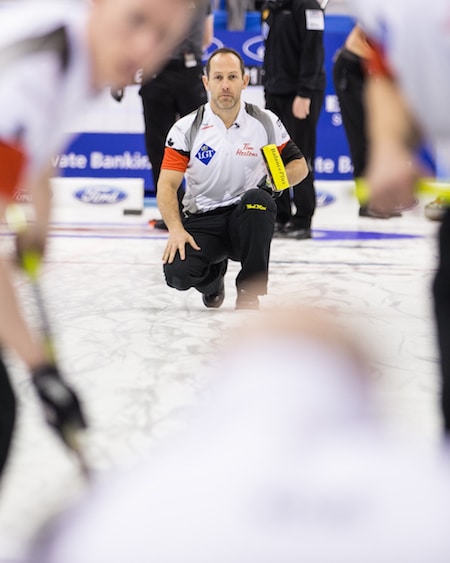 Canada wasn’t pushed hard in either of its Tuesday assignments — the morning draw produced a 6-3 win over Germany — and the chance to wrap up early for the second straight evening, with morning draws to follow, was welcomed by the Canadian team, which is rounded out by third Marc Kennedy, lead Ben Hebert, alternate Scott Pfeifer, team coach John Dunn and national coach Rick Lang.

“We’ve got some tough teams at the end of our schedule,” said Koe. “Obviously, 7-and-0 is as good as we could hope for, but there are a lot of teams out there with winning records, so it’s really hard to predict what will happen. But I think it’ll be a little clearer after (Wednesday).”

Canada opened the game against Russia with a first-end deuce and never looked back. After Russia was forced to one in the second, Canada scored back-to-back singles in the third and fourth ends, and then put away the win with an emphatic three in the eighth to bring on the handshakes.

Canada is alone in the lead in the 12-team round-robin standings, while the Norwegians are close behind at 6-1, with John Shuster of the U.S. alone in third at 5-2.

Behind them are Sweden, Denmark’s Rasmus Stjerne and Yusuke Morozumi of Japan at 4-3, while the Swiss and Finland’s Aku Kauste are hanging in at 3-4.

“I think the timing is good, that we’re playing them (Sweden, Norway, Switzerland) at the end of the week,” said Koe. “We typically get better as an event goes on, and we’re getting a better handle on the ice. It’s definitely playable — the more we’ve played on it, the better we’ve been getting, so getting them at the end, before the playoffs hopefully, I think is good timing.”