BASEL, Switzerland — Understand, Team Canada is not looking past its next assignment at the 2016 World Men’s Curling Championship, presented by Ford of Canada. 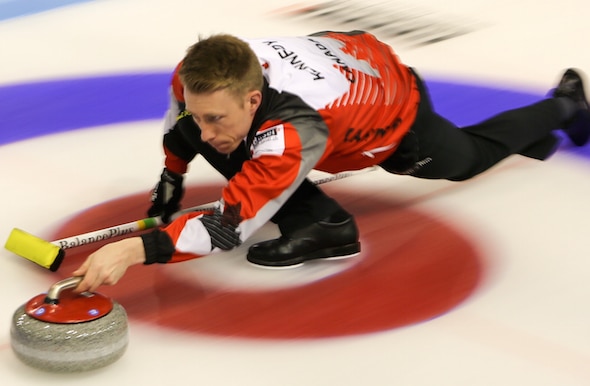 The focus in the wake of Tuesday morning’s efficient 6-3 win over Germany’s Alexander Baumann remained firmly on a Tuesday evening assignment against a mystery Russian team that was parachuted into Basel at the last minute to replace the reportedly ill first unit.

But based on the Canadians’ performance in the past three games, it’s apparent that the team is ramping up into playoff form at St. Jakobshalle.

Canada’s record improved to 6-0, good enough for sole possession of first place in the 12-team round-robin standings. Norway’s Thomas Ulsrud is next at 4-1, while defending champ Niklas Edin of Sweden (losers of two straight), Denmark’s Rasmus Stjerne and John Shuster of the United States are all tied at 4-2.

“It’s a good feeling,” said Canadian skip Kevin Koe. “I know we were struggling a bit (on Sunday) but we found a way to win those games. And the last few games have been really good. You can just tell we’re getting better. Draw weight is still a little tricky,  but it seems to be getting a little more consistent.”

The evidence presented Tuesday morning was pretty overwhelming. The Canadians were scored at a collective 92 per cent against a struggling German team that juggled its lineup, moving Baumann to the third position, promoting Marc Muskatewitz from second to skip, and benching lead Sebastian Schweizer in favour of alternate Daniel Rothballer.

“They (Team Canada) have all the weapons, all the knowledge, all the experience,” summed up national coach Rick Lang. “Kevin calls a great game; they can make the power shots, they can make the draw shots, they’ve got it all. They just have to be careful not to beat themselves, but the way they’ve been going now, it doesn’t look like that’s going to happen.” 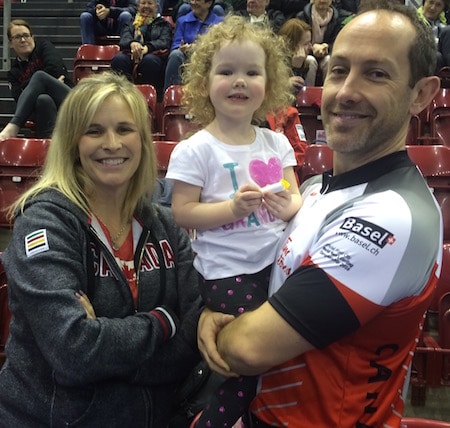 It was a happy family after Tuesday morning’s win. From left, Jennifer Jones, Isabella and Brent Laing.

Canada was never pushed very hard on Tuesday, and even when they were, players stepped up quickly to put out fires. In the second end, for instance, Canadian vice Marc Kennedy made a marvellous double-raise double takeout (watch it by clicking here) to erase a German threat, leading to a Canadian blank.

The next end, Canada pounced on a series of German misses to score three and never surrendered the lead thereafter. Germany would score two in the fourth, but in the sixth, a double-takeout by Hebert, followed by a precision hit-and-roll from second Brent Laing led to a Canadian insurance deuce.

You see the theme here — the whole lineup was contributing big shots, and Koe’s job was relatively easy.

“We played well, and we put a lot of pressure on them,” agreed Koe. “They made some really good shots in the first few ends; I’d never played them or really seen much of them, and we didn’t know what to expect from their record. But they came out and made everything. But we stayed patient, which was good. And we were always in control.”

The Russians, who had the bye on Tuesday morning, have surprised many with a pair of wins in five games, despite not arriving here until the day before practices to replace the more familiar unit skipped by Andrey Drozdov. The skip of the team in Basel, Alexey Tselousov, has some experience — he played second for Drozdov in 2013 at Victoria — but for the most part, the team is a mystery.

Which is why Koe will take nothing for granted, even with his own team playing so well.

“You have to expect the worst, that they’ll play really well against you,” said Koe. “I’ve seen a bit of the Russians this week and the skip seems to be making a lot of shots. I know they’ve won a couple games, they beat Scotland, so obviously they’re playing well. You just have to assume they’ll keep playing well.”