Canada will send an experienced pairing to the 2016 World Mixed Doubles Curling Championship, it was announced today by Curling Canada. 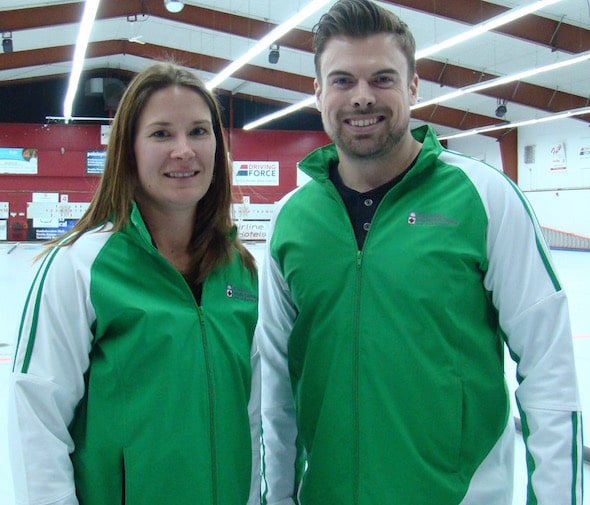 Mixed Doubles Program Manager/National Coach Jeff Stoughton confirmed that the Saskatchewan duo of Marliese Kasner and Dustin Kalthoff will wear Canadian colours at the world championship, April 16-23 in Karlstad, Sweden, where the qualifying process will begin for countries to earn berths at the 2018 Winter Olympics in PyeongChang, South Korea.

The Saskatoon players captured the bronze medal at the 2016 Canadian Mixed Doubles Championship, which concluded this past Sunday at the Nutana Club in their hometown.

Both the gold- and silver-medallists — Jocelyn Peterman/Brett Gallant and Laura Crocker/Geoff Walker respectively — declined world championship invites due to a previously known scheduling conflict  (the event dates were announced 12 months ago) with the Grand Slam Players’ Championship.

“We know it wasn’t an easy decision for those teams, but we respect their choice, and at the same time we’re truly excited to see Marliese and Dustin get the chance to represent Canada at the world championship,” said Stoughton. “They played superbly throughout the weekend at the Canadian championship, and I have every confidence that they’ll carry that momentum with them to Karlstad. At the same time, it was wonderful to see so many players from across Canada take part in this year’s championship. I know the competition will help all of our mixed doubles players as we push towards 2018. With no major scheduling conflicts next season, I like the direction that our program is headed in.”

Kalthoff and Kasner posted an 7-2 overall record during the Canadian championship, and claimed the bronze medal when fellow semifinal losers Ryan Fry and Emma Miskew defaulted due to an injury.

While it will be Kalthoff’s first international experience, Kasner has worn the Maple Leaf on two occasions, winning medals both times. She skipped Canada to a gold medal at the 2003 World Junior Women’s Championship in Flims, Switzerland, and three years earlier in Geising, Germany, she played third for her sister Stefanie Lawton and brought home a silver medal. She’s also a four-time Saskatchewan women’s champion.

Kalthoff, meanwhile, had played in three previous Canadian Mixed Doubles Championships, making the playoffs twice, including a silver-medal result in 2013 at Leduc, Alta.

“Dustin and I are really proud and excited to have the opportunity to represent Canada at the World Mixed Doubles Championship,” said Kasner. “We really worked well on the ice in Saskatoon and kept getting better as the week went on. We can’t wait to get on the ice in Karlstad.”

The 2016 Worlds will be the first event where qualifying points will be available for countries to earn berths into the 2018 Winter Olympics in PyeongChang, South Korea. The combined results of the 2016 and 2017 World Mixed Doubles in Lethbridge, Alta., will decide the seven countries that join host South Korea in 2018.

A total of 42 countries have entered the 2016 World Mixed Doubles, with six pools of seven teams. Canada is in a pool with Australia, China, France, Ireland, Italy and Serbia.