Saskatchewan remains the only undefeated team after the second day of round robin competition at the 2016 Canadian Wheelchair Curling Championship being held at the Callie Curling Club in Regina. Hometown favourite Darwin Bender, with Marie Wright, Larry Schrader, Gil Dash and Moose Gibson, has a 4-0 record after stealing three ends in a 10-2 romp over Newfoundland/Labrador’s Cecilia Carroll in the morning draw, then stealing five points to kick off a 10-3 win over B.C.’s Frank Labounty later in the day. 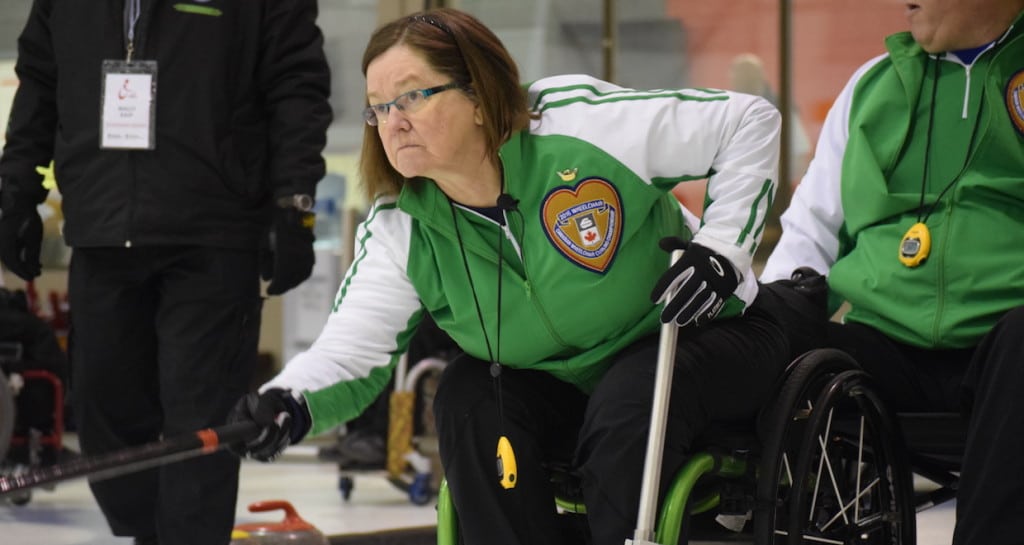 Dennis Thiessen (Manitoba) and Jack Smart (Alberta) suffered their first losses to fall behind Bender in the standings. Thiessen won in an extra end over Smart on Tuesday morning before dropping a 7-4 decision to Northern Ontario’s Doug Dean. Smart scored three points in the first end, then stole the next five ends en route to an 11-0 win over Quebec’s Sébastien Boivert (2-2). Team Ontario, with skip Colinda Joseph, third Doug Morris, second Jon Thurston and lead Ross Nicholson, picked up its first win on Tuesday morning, against British Columbia, but dropped an extra-end 10-7 loss to Nova Scotia’s Trendal Hubley-Bolivar in Draw 4. Newfoundland/Labrador’s Carroll came into the Tuesday evening draw looking for her first win. She and her team of third Darlene Jackman, second Mel Fitzgerald, lead Felix Green, fifth Joanne MacDonald and coach Leslie Anne Walsh stole four ends on the way to a 9-2 win over Mike Fitzgerald of New Brunswick. 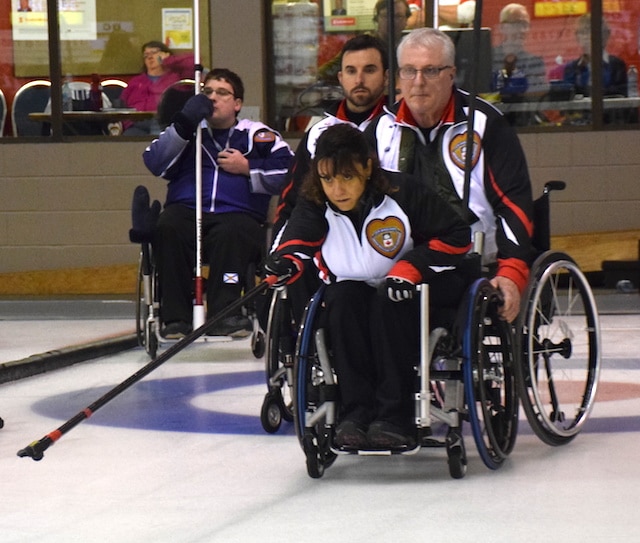 It’s been a struggle for Frank Labounty, who played second on the British Columbia team that won the 2015 championship and has now moved up to skip. Labounty is still looking for his first win after dropping games to Ontario and Saskatchewan on Tuesday. Action continues on Wednesday with draws at 2 p.m. and 7 p.m. (MDT). Ten teams, representing nine provinces plus Northern Ontario, play a round robin from Monday to Friday, April 8, followed by the Page playoff games — 1 vs. 2 on Friday at 7 p.m. (all times MDT) and 3 vs. 4 on Saturday at 10 a.m. The semifinal (loser of 1-2 vs. winner of 3-4) goes Saturday, April 9, at 3 p.m. On Sunday, April 10, the bronze-medal game (loser of 3-4 vs. loser of semifinal) will be played at 11 a.m. while the championship gold-medal final (winner of 1-2 vs. semifinal winner) is scheduled for 2 p.m. Live-streamed broadcasts of the 2016 Canadian Wheelchair Curling Championship will be available at www.wcblog2.com/.