BASEL, Switzerland — Team Canada is two victories away from a coveted gold medal at the 2016 World Men’s Curling Championship presented by Ford of Canada.

A gritty 6-4 win over Norway’s Thomas Ulsrud on Thursday morning at St. Jakobshalle lifted Kevin Koe’s Calgary team to 9-1 in the 12-team round-robin, wrapping up first place with one game still to play, and clinching a berth in Friday’s Page 1-2 playoff (1 p.m., all times ET, TSN).

And with the Page 1-2 game comes two cracks at qualifying for Sunday’s 9 a.m. gold-medal game.

“It’s big, for a couple reasons,” said Koe, who’s chasing his second world championship, and Canada’s first since Glenn Howard (with Laing throwing second rocks) prevailed in this same arena in 2012. “Confidence-wise, to beat a good team like them. And having hammer (in the first end) is a big thing in the playoffs. You know you’re going to be playing a good team, no matter what, and it’s just a little reassuring going into a game knowing you have hammer.”

It was Koe who delivered one of the key shots of this championship to date for Canada, in the third end. After two only so-so ends to begin the game, Norway, leading 2-1, was sitting two. But Koe navigated a port to make an angle-raise takeout, and then spinning both the promoted stone and his shooter into the eight-foot to score a much needed go-ahead deuce.

That was the highlight-reel shot, but Koe also made clutch draws in the second and fourth ends that got his team out of trouble; in the second, his freeze held Norway to just a deuce when a count of four was potentially in play. And in the fourth, it was another freeze that forced Norway to take a single. 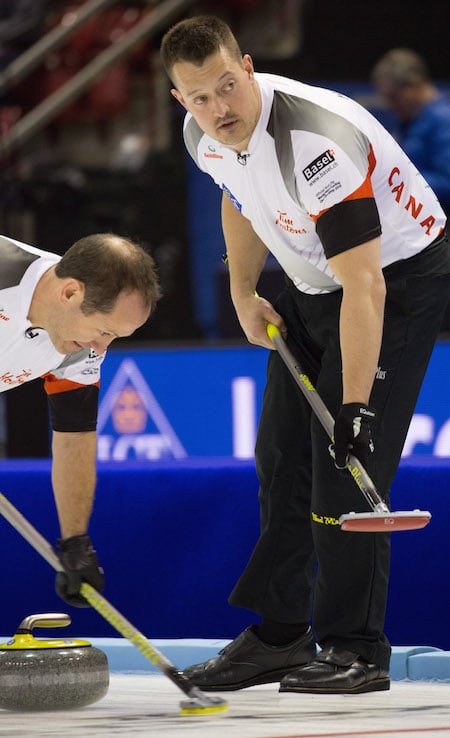 Canada followed up with two blank ends, and then Koe jumped all over an Ulsrud miss in the sixth to score what would turn out to be a winning deuce.

“It was good to see the skipper play really well,” said Kennedy. “He bailed me out the first four ends. We’ve had a hot skip all year; we’re just trying to do the right things to keep him hot. “

Norway, looking to appear in a third consecutive gold-medal game (the Ulsrud team prevailed in 2014 at Beijing, and lost to Sweden’s Niklas Edin last year in Halifax), dropped to 6-4 with the loss — still in the playoff hunt.

Canada closes out its round robin later on Thursday, taking on Switzerland’s Sven Michel (4-5) at 1 p.m. on TSN1.

Behind the Canadians, the picture is anything but clear. Denmark’s Rasmus Stjerne (easily the surprise of the championship after coming out the European Championship ‘B’ pool in November) and John Shuster of the United States are tied for second at 7-3 while Japan’s Yusuke Morozumi and defending champ Niklas Edin of Sweden are next at 6-3, with Norway on the playoff bubble.

It was Sweden that handed Canada its lone loss, on Wednesday afternoon, so coming back strongly against Norway was crucial, said Kennedy, as was nailing down the Page 1-2 game, despite Koe’s tradition of taking the longer road to championships.

“It’s a load off the shoulders, especially representing Canada, to make it into the playoffs,” said Kennedy “That’s Step 1. It’s not the tough road through the 3-4 game that we prefer. But we’ll take the 1-2 game.”