BASEL, Switzerland — A man who whose contributions to the sport of curling, on and off the ice, are recognized around the world was acknowledged on the world stage today. 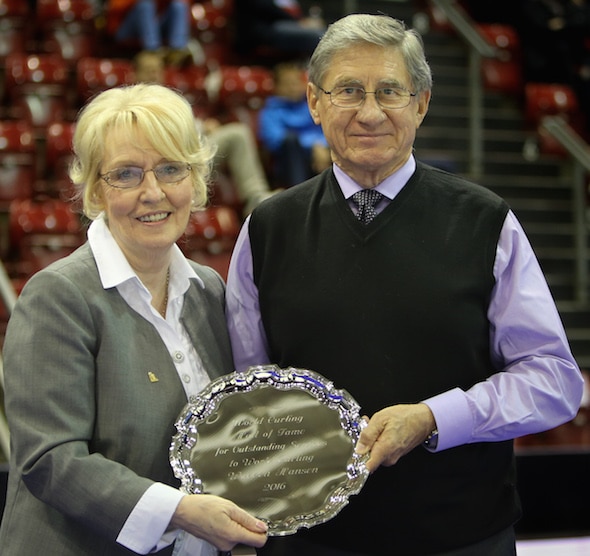 Canada’s Warren Hansen was inducted into the World Curling Hall of Fame during the 2016 World Men’s Curling Championship, presented by Ford of Canada, Page playoff 1-2 game at St. Jakobshalle.

Hansen, Curling Canada’s longtime Director of Event Operations and now a consultant to Curling Canada’s Board of Governors, was active in curling as a player, administrator, official, coach and promoter. He was inducted into the Canadian Curling Hall of Fame last June after a 42-year career working for Curling Canada.

“We couldn’t be happier for Warren, because what he’s done for the sport of curling, not just in Canada but around the world, simply can’t be overstated,” said Hugh Avery, Chair of Curling Canada’s Board of Governors. “Warren has devoted his life to curling, and we constantly see the fruits of labour as our sport continues to grow in popularity, both with fans and participants.”

Hansen was a Brier champion as a member of Hec Gervais’s 1974 Alberta team and, interestingly, his lone appearance at the world championship took place in Switzerland as Hansen and the Canadian team lost to Sweden in the semifinals of the 1974 Air Canada Silver Broom in Bern.

His greater impact took place behind the scenes; he was significantly involved in the origins of coaching, officiating and icemaking guides and standards, and also taught the sport to beginning curlers around the world.

“It is my great pleasure to announce Warren Hansen’s induction into the World Curling Hall of Fame,” said World Curling Federation President Kate Caithness. “His total dedication to the development of our sport, in Canada and worldwide, is one reason curling is in such good health today. Many of the major milestones we have reached in our sport, such as curling joining The Olympic Movement, Warren, somewhere along the way, has been involved.”

In Canada, he worked tirelessly to make the Canadian men’s and women’s curling championships — the Brier and the Scotties — into events that transcended curling. He achieved that dream as both are considered major sports and entertainment properties that attract legions of fans annually.

Beyond that, though, his goal was to take curling to another level of athleticism. He encouraged fitness, discouraged unhealthy lifestyle habits, and pushed to erase traditional curling stereotypes — all with a goal of making the sport more appealing to the Olympics.

He was active in working with curling boosters from around the world to lobby the International Olympic Committee to make curling a medal sport — a goal that was achieved at the 1998 Winter Games in Nagano, Japan.

“To be inducted into the World Curling Hall of Fame is the greatest honour that could ever be bestowed upon anyone in the curling world,” said Hansen. “I’m extremely proud to stand beside the other 15 Canadians who were previously inducted.”

Hansen is one of three inductees to the World Curling Federation Hall of Fame this season. Former world champ and five-time European champ Elisabeth Högström of Sweden will be inducted later this month at the World Mixed Doubles Curling Championship in Karlstad, Sweden, while Franco Zumofen of Italy will be inducted at the summer bonspiel in Cortina d’Ampezzo, Italy.

Prior to 2012, the WCF awarded the World Curling Freytag Award, named after the late Elmer Freytag of the U.S. Curling Association, who was a founding member of the International Curling Federation (now the WCF).

For more information on the World Curling Hall of Fame, go to: www.worldcurling.org/world-curling-hall-of-fame