BASEL, Switzerland — It was worth the wait. It had been four years since a Canadian team stood atop the medal podium at the world men’s curling championship, but that dry-spell came to a thrilling conclusion on Sunday at St. Jakobshalle. 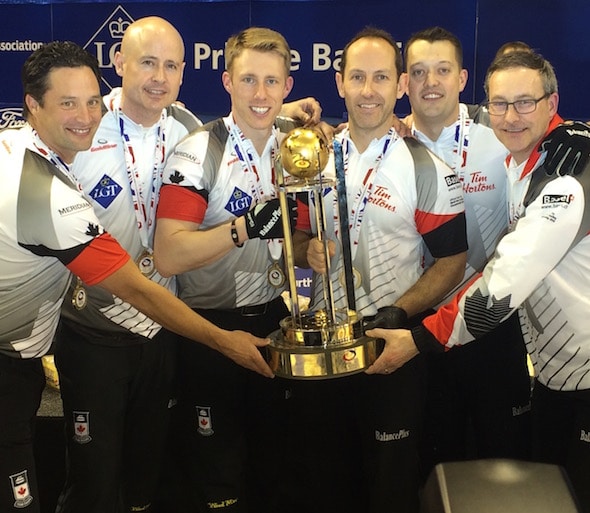 Kevin Koe’s Calgary team defeated Denmark’s Rasmus Stjerne 5-3 in the gold-medal game of the 2016 World Men’s Championship, presented by Ford of Canada. For Koe, vice-skip Marc Kennedy and lead Ben Hebert, it was a second world gold medal, while second Brent Laing was crowned world champ for a third time; he was a member of the last Canadian team to win gold, Glenn Howard’s 2012 team, which also prevailed at St. Jakobshalle in Basel. 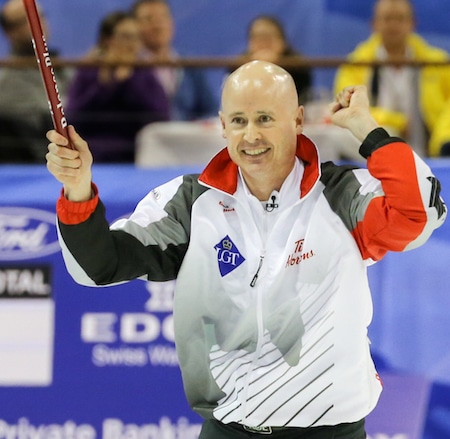 Alternate Scott Pfeifer, a three-time world champ as a player with Randy Ferbey’s team, team coach John Dunn and national coach Rick Lang completed the Canadian lineup. “It feels awesome,” said Koe, who followed up on his 2010 gold-medal at Cortina d’Ampezzo, Italy, (with a different team) by becoming just the 15th skip to win two or more world titles. “It was a battle today, they’re a good young team. It wasn’t flashy, but it was solid, and what a feeling. It’s so hard to win the Brier, so you just want to win the worlds when you get here, and it feels awesome.” It was a nail-biting final in which the relatively inexperienced Danish team — the country had never reached a gold-medal game in 39 previous attempts — matched the Canadians shot for shot. In fact, it was the Danes who were forcing the issue early. Canada had to take a single in the first end, and then it was Stjerne who secured the game’s first deuce, in the third end. Canada, though, managed to fight back with a go-ahead deuce in the fifth end to carry some momentum into the second half of the game. After forcing to Denmark to a single in the sixth, Canada blanked the next two ends, and then scored a decisive hold-your-breath deuce in the ninth when Stjerne — who was simply brilliant all week — barely missed on a double-runback raise attempt, giving Koe the open draw for two. In the 10th, Kennedy’s runback double takeout all but killed the Danes’ hopes of a comeback, and it was left to Koe to finish it off. After Stjerne’s beautiful freeze, Koe threw his trademark heater and was able to pick out the Danish stone and set off a long-awaited celebration for Canadian curling fans. “This is why we put this team together,” said Koe. “This is it; this is amazing. And there’s more in the tank; we have things to improve on. Honestly, though, you couldn’t write a better script for all we’ve gone through this year.” “We put a lot of hard work into it,” added Koe. “Last year was a bit of a struggle and we made some changes (Kennedy moved to vice-skip), and they’re paying off. What a year we’ve had — world champions, we’ve won a lot of other big events and hopefully we’ll just keep getting better. And I think we can. It’s only our second year playing together, and with more time, I think we’ll get better. We’re still learning a lot about each other. But what a team we’ve put together this year.” 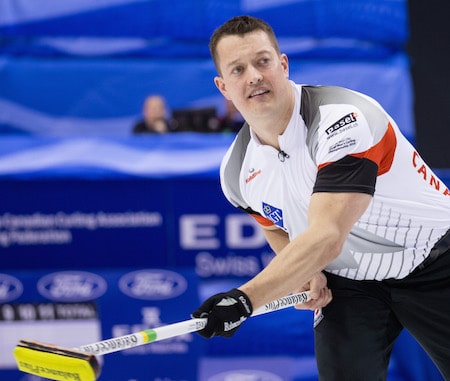 The Danes, while disappointed, knew they had taken a significant step forward after starting this season in the European Championship ‘B’ Pool. “I’m sad right now,” said Stjerne. “I thought we played a good  game. My shot in the ninth, it was there really and then we just let it slide away. I’m gutted right  now, but in a few days from now I think I’ll be proud of what we did.” Sunday’s final was a relief in more ways than one for Kennedy; he entered the playoffs with a gripper shoe in need of repair after it fell apart in Canada’s final round-robin game. He took it to a Swiss shoe repair shop, and the shoe was glued back together perfectly, but it was also polished, despite Kennedy’s instructions not to because the scuffing on the toe of his right shoe helps him control his sliding speed. “I knew right away when I saw it. ‘Oh no, he got rid of my rudder. It’s too pretty now,’ ” said Kennedy with a laugh. It was cause for concern, though, so Kennedy on Sunday morning went to a curling club 20 minutes away from St. Jakobshalle to scuff up the shoe properly. “I’ve spent the last two days trying to scuff it and grind it down and get some repetition so I could get used to the speed,” said Kennedy. “I knew I needed to throw some rocks this morning to get a little more friction on it, and it made a big difference. I didn’t come out with any uncertainty.” Nor did the rest of the team, and Canada won gold for the 35th time in the 58-year history of the world men’s championship. Earlier on Sunday, John Shuster of the United States won the bronze medal, beating Japan’s Yusuke Morozumi 8-6. Japanese lead Kosuke Morozumi won the Collie Campbell sportsmanship award. The 2017 Ford World Men’s Curling Championship is scheduled for April 1-9 at Rexall Place in Edmonton. Tickets are now available at https://www.curling.ca/2017worldmen/tickets/ The French version of this story will be posted as soon as possible at https://www.curling.ca/?lang=fr