Another win for Canada at World Mixed Doubles

Canada’s Marliese Kasner and Dustin Kalthoff continue to build momentum after scoring a decisive 8-3 win over father-daughter duo Neil and Alison Fyfe of Ireland on Monday at the 2016 World Mixed Doubles Curling Championship taking place at the Kobbs Arena in Karlstad, Sweden. 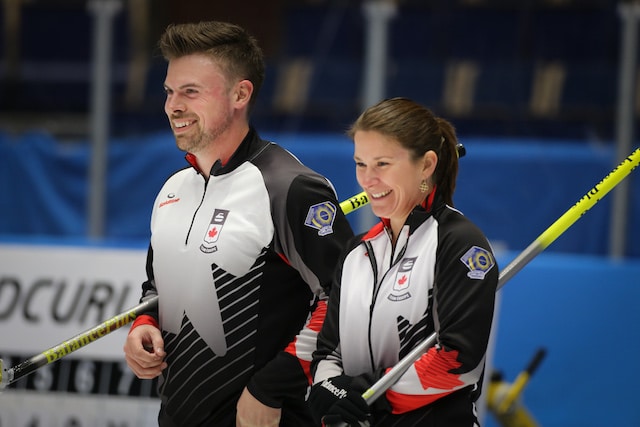 The game opened with the Irish stealing one in the first end, but Kasner and Kalthoff rebounded with a deuce and followed that up by stealing two more. A score of three in the fifth end put the Saskatoon duo ahead 7-2 and they never looked back. “Momentum here is important,” said Kalthoff about starting the competition with two wins. “We need to keep doing all the things we’re doing right and to keep working on the things that need minor tweaking to get to the point that we feel like we can bring home the gold.” Kalthoff is savouring the experience of representing Canada on the world curling stage. “When you’re from Canada you don’t get a lot of opportunities to represent your country because there’s so many excellent curlers,” he said. “It’s a lifetime dream of mine, like it is for most Canadians, it’s just an honour that can’t be described in words.” Tuesday will be a two-game day for the Canadians, with games against Italy’s Marco Pascale and Lecrezia Laurenti (2 a.m. ET) and Serbia’s Filip Stojanovic and Dara Gravara Stojanovic (8:30 a.m. ET). The Canadian team — which includes national coach Jeff Stoughton and team leader Jim Waite — and France are in a group with Australia, China, Ireland, Italy and Serbia. The top two finishers are guaranteed berths in the 16-team playoffs, while the third-place finisher also has a chance, based on the Draw-Shot Challenge totals.

Selected games from the World Mixed Doubles Championship will be streamed live online. Go to the event website, https://www.worldcurling.org/wmdcc2016, to see the games and broadcast schedule. You can also find live scoring, the schedule and team lineups.